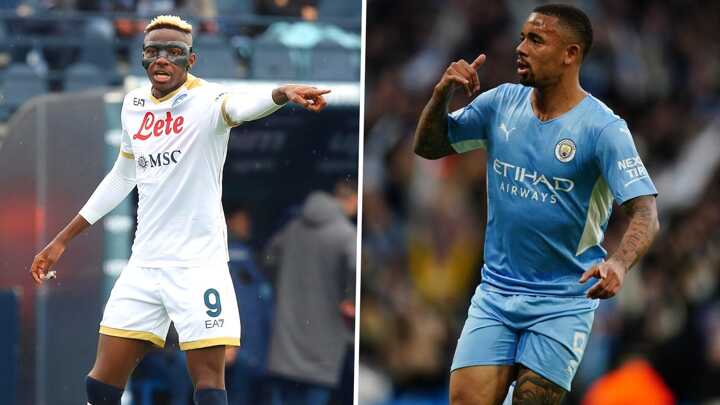 Arsenal fans have unanimously called for club management to go for the services of Napoli forward Victor Osimhen at the expense of Gabriel Jesus of Manchester City during the summer transfer window.

With the Gunners closing in on a return to Champions League action, the club is set to reinforce their squad and the 23-year-old Nigeria international is among the players, who have been mentioned as possible targets.

The club is also said to have already entered talks to sign Brazilian Jesus from Premier League rivals Man City. However, on Friday, AFTV posted a transfer post on their social media pages, asking the fans if Osimhen was the right choice for Mikel Arteta.

In a recent interview, Osimhen, who has managed 13 goals from 25 appearances in Serie A this campaign and has also been linked with Newcastle United and Manchester United, revealed his stance on his future, while hailing boss Luciano Spalletti as “a very high-level coach”.

“I have to thank Spalletti so much,” said Osimhen, whose under contract at Diego Armando Maradona Stadium until 2025. “He helped me a lot in my growth as a footballer from many points of view, and I have to thank him and his staff for helping me score all these goals. They helped me improve my movement.

“He always talks to me after training and trains me both with and without the ball. I know I'm dealing with a very high-level coach, really. It is a great honour and a real pleasure to be trained by him, and I hope to be able to work with him for many more years.”

Despite his stance, Arsenal fans are not hearing any of it and they have now called on the club to move quickly and sign the player ahead of the new campaign.

“Osimhen should be the first choice please and not Gabriel Jesus,” Elvis Godspower responded to the question of whether Osimhen should sign for Arsenal.

Abiodun Eleniyan Ajani seconded him: “Osimhen is the beast we need in that frontline,” he said adding: “He’s a monster when it comes to attacking football. He will fit in well with our style of play.”

Nanayaw Richie opined: “Arsenal should sign Osimhen and not Jesus, he is the striker we should go for, not unwanted Gabriel [Jesus],” he said while adding: “Osimhen is a fighter and real monster when it comes to air balls.”

Another supporter, Nwabekee Emmanuel said: “Get the deal done, Jesus should be our second striker.”

“Great player… will be a nice addition,” Ama Oge Chukwu said on signing the Super Eagle while Eddy Eldorado Igbinovia opined: “Victor [Osimhen] is the kind of striker we need at the moment… a bully of a striker, the kind that will give defenders a nightmare with his tireless display over 90 minutes.”

Meanwhile, another set of fans are cautious that neither Osimhen nor Jesus will fancy the opportunity to join Arsenal unless they qualify for Champions League football next season.

“None of them will come without Champions League action. So stop dreaming please,” explained Michel G. Kapy while Ian Butterfield wrote: “He [Osimhen] ain’t going to come to a club that only plays Premier League matches and Nick Arsenal Ray said: “Not if we don’t get Champions League spot.”

“Qualify for Champions League first then the signings will come by themselves,” advised Evance Owuor while Francis Omondi Ochieng wrote: “They can’t afford his price tag.”

Between Osimhen and Jesus, which player should Arsenal sign in the next transfer window? Give us your thoughts in the comment box below.