Although the Nigerian was on song against AS Roma, that could not stop the Winged Lions from getting demoted to the Italian second tier 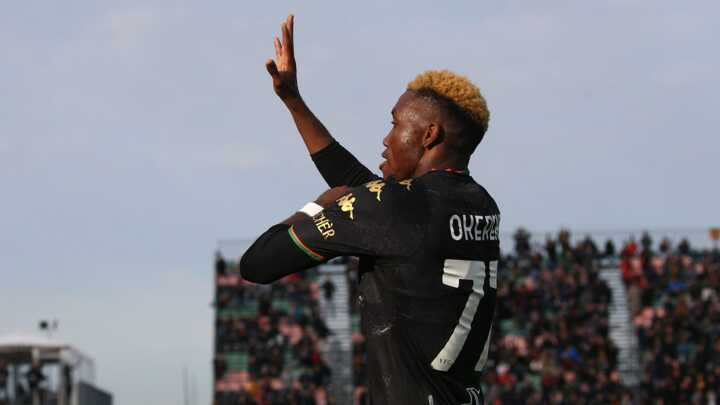 David Okereke was on target while Sofian Kiyine was sent off as Venezia settled for a 1-1 draw versus AS Roma in Saturday’s Serie A encounter.

Before the game against Jose Mourinho’s men kicked off in Rome, the Winged Lions’ demotion to Serie B was confirmed after Empoli settled for a draw with Salernitana.

Regardless, Venezia put up a fine display to pick up an away point against the Uefa Europe Conference League finalists.

Heading into the fixture, AS Roma needed a win to boost their chances of qualifying for Europe next season, nevertheless, the visitors had other ideas.

With the match just a minute old, the Venice based outfit took a shock lead after Okereke headed Mattia Aramu’s cross past goalkeeper Rui Patricio for his seventh strike of the 2021-22 campaign.

Fuelled by the early setback, the home team came out stronger but could not restore parity.

They had a fine chance to draw level, however, a well-taken free-kick taken by Lorenzo Pellegrini hit the woodwork.

Venezia’s lead was threatened in the 32nd minute when Morocco international Kiyine was given the marching orders by referee Simone Sozza for a silly kick-out at Pellegrini.

Luck was against AS Roma with Bryan Cristante and Pellegrini hitting the woodwork early in the second period.

Nevertheless, their constant pressure eventually paid off in the 76th minute when Eldor Shomurodov rifled into the top of goalkeeper Niki Maeenpaeae’s net.

Notwithstanding their numerical disadvantage, Andrea Soncin’s side stayed firm to pick a point away from home.

After playing for 80 minutes, Okereke was replaced by Dennis Johnsen while his compatriot Tyronne Ebuehi was introduced for Domen Crnigoj at the same time.

Whereas, Cameroon’s Jean-Pierre Nsame was an unused substitute in the entertaining fixture.

Roma’s result may have saddened Mourinho, but he will surely have his eyes fixed on the upcoming Conference League final, which provides an opportunity to win their first major trophy since 2008.

Prior to that, they visit Torino at Stadio Olimpico Grande on May 21.

With Venezia’s relegation confirmed, they will Cagliari in their last match of this season before starting life in the Italian second-tier in the 2022-23 campaign.