Gareth Bale's agent has no intention of sitting down with Real Madrid to discuss his client’s future even though the Wales international has played just 102 minutes for the club in the last 11 games. 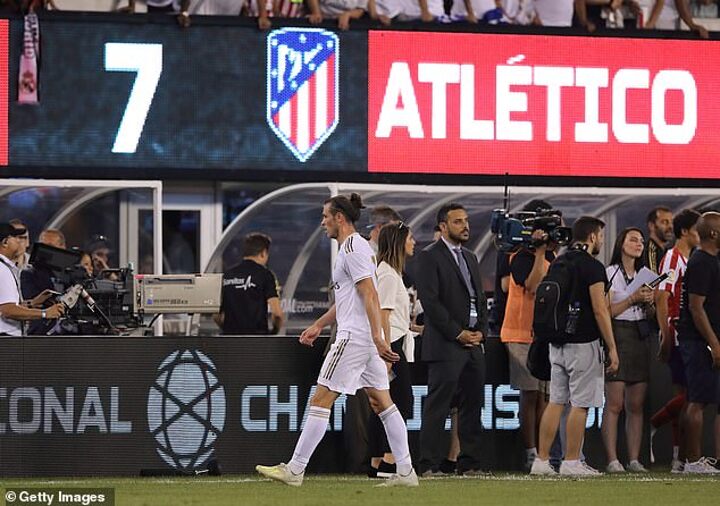 ‘There is nothing to discuss’ is the line Bale and his team are sticking to as he prepares to travel to Manchester this week for the Champions League last-16 second leg against City.

He believes he has no chance of starting the game but the cold-shoulder treatment from Zinedine Zidane is having no effect on Bale’s determination to entrench himself at a club who do not want him, cannot sell him and are committed to paying him one of the biggest salaries in football until 2022.

Bale’s last contract renewal in 2016 put him on €17million (£15.3m) net a season. Bonuses written into the deal mean winning the league this year will be factored into his salary next season, which will rise nearer to €19m (£17.1m)

Real Madrid players committed to a 10 per cent wage cut on April 8 and, with the new season set to start in Spain on September 12 still without spectators, the squad is due to negotiate a second cut.

But even after another reduction, Bale will remain on a salary that no one else will contemplate matching, so he is going nowhere.

The player’s personality has made digging-in easy. He has always been single-minded. Complaints from managers in his early days at Tottenham that he would not play through the pain never served to diminish his determination to rule himself out of games when he was not 100 per cent. 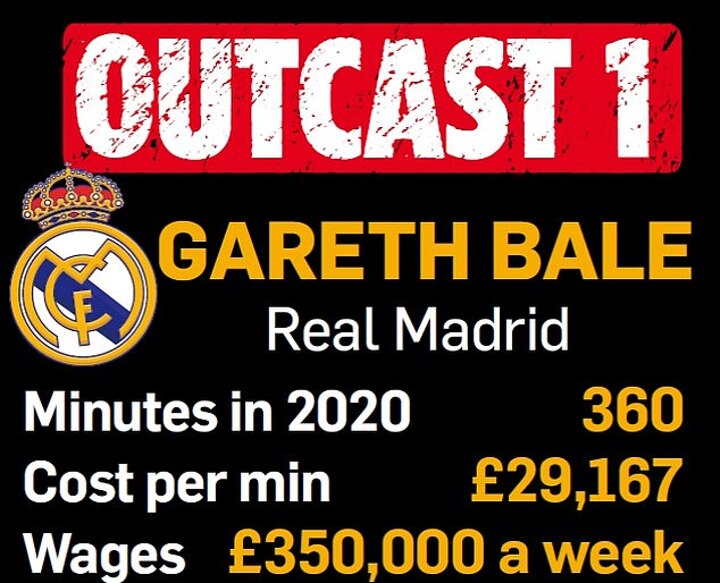 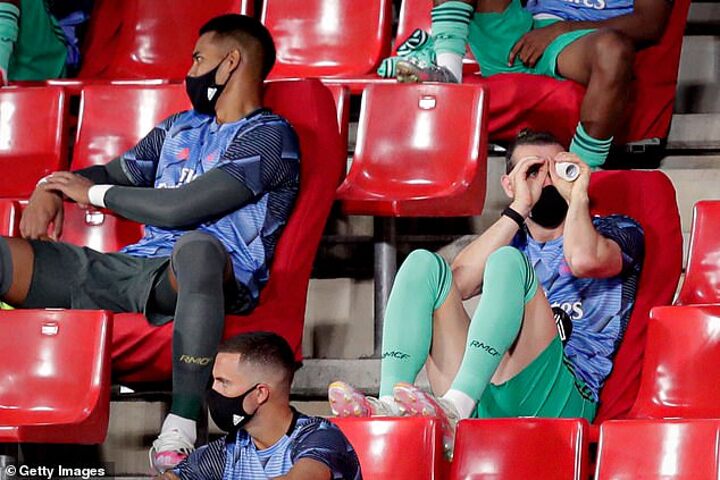 There was another insight into how thick-skinned he is on the occasion of his Real Madrid debut in 2013. The television broadcaster who held the rights to La Liga matches at the time invited a small group of British journalists to Villarreal’s Madrigal stadium to watch Bale’s first game.

Bale scored in a 2-2 draw and was expected to speak to media who had made the trip but, when he walked out of the stadium through the press area post-match, he ignored all attempts to engage him and got straight on the team bus.

Madrid coach Zidane has a similar character. Frederic Hermel is the author of a recently published biography of the Frenchman. He has followed his career since 2001 when L’Equipe sent him to cover Zidane’s arrival at Real Madrid. 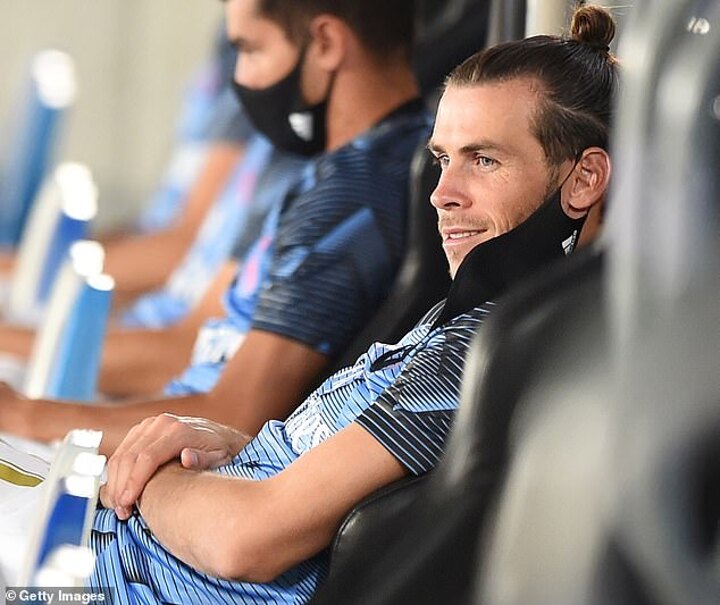 In a recent interview Hermel was asked what most defines Zidane’s personality and he replied: ‘His rectitude. He is a guy who bases everything on trust. If you abuse that trust, he puts a cross next to your name and it’s over. He doesn’t forgive [that].’

Zidane did not like Bale’s comments after the 2018 Champions League final that he ‘needed to play every week’ and that he would need to ‘sit down with his agent and take a decision’.

Never mind that Bale’s two goals had just won the final against Liverpool and saved Zidane his job, nor that Cristiano Ronaldo had also cast doubts on his future in a post-match interview. When Zidane left the club that summer, his desire to sell Bale and the club’s reluctance to do so was one of the reasons.

Reunited during Zidane’s second spell in charge, the coldness has remained. ‘If Gareth Bale can leave tomorrow then even better,’ said Zidane in a press conference last pre-season, stunning Bale who had expected more discretion.

Zidane had been told that Bale’s move to China was imminent and would be waved through by the board. Real Madrid were beaten in a friendly in New Jersey, by Atletico Madrid 7-3 and, with Zidane’s future looking fragile, the club U-turned on allowing Bale to move to Jiangsu Suning on a free transfer.

As Tony Kroos admitted in an interview last week, Bale has not forgotten the way he was publicly declared persona non grata before having his departure blocked.

Zidane and Bale’s relationship is amicable but there is still a disconnect. The coach feels he does not see the application levels from Bale that justifies picking him ahead of young players such as Vinicius Junior and Rodrygo Goes. The player feels that, having won four Champions Leagues with Madrid — scoring in three of the finals, which Zidane only did once — he is not shown the respect he deserves.

Madrid could propose a free-transfer but the China option has faded and no one in the Premier League is willing to match his salary. 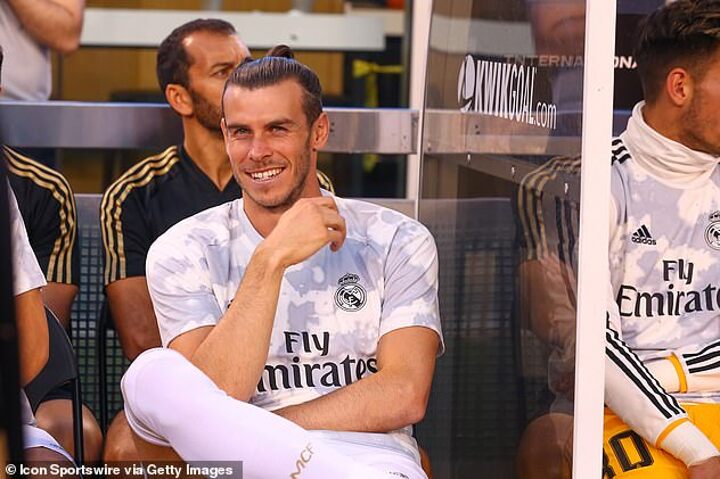 Whatever talks might take place this summer will have to be 100 per cent initiated by the club because Bale is more entrenched than ever as he feels he has achieved everything he wanted in European football. He has even incurred the wrath of some of the club’s dignitaries. After pictures appeared of him joking about in the stands, mask over eyes, or pretending to look through a pair of binoculars, few were amused.

‘Bale is playing around,’ said Jorge Valdano, former Real player and coach. ‘But Madrid is not a game’.

Bale will not be affected by such criticism. He will be a spectator at the Etihad on Friday, that is if Zidane selects him to travel. Nothing in his frosty and expensive relationship with the club can be ruled out.

Manchester United’s signing of Alexis Sanchez in January 2018 was greeted as a real coup.

Beating Manchester City for the great Chilean was a statement of intent and Sanchez celebrated becoming the Premier League’s best-paid player on £400,000-a-week by playing Glory, Glory Man Utd on the piano.

Unfortunately, that’s as good as it got. Sanchez struggled for form and injury in Manchester, and scored only five goals in 45 appearances before joining Inter Milan on loan last August with United still having to pay the majority of his wages. 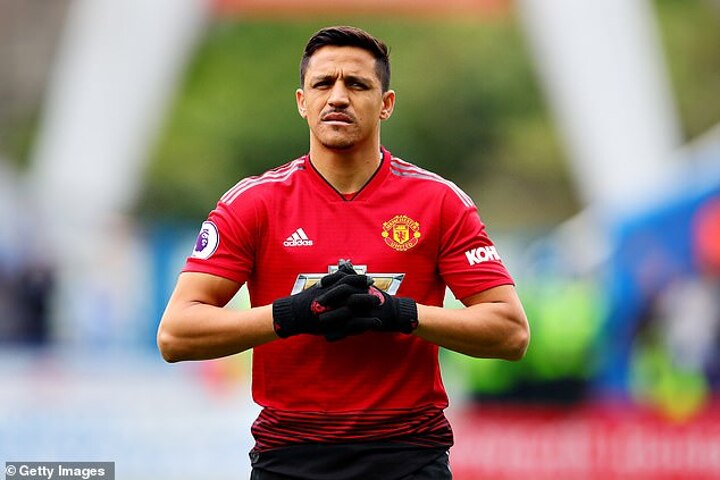 Though Sanchez didn’t require a transfer fee, Henrikh Mkhitaryan went to Arsenal in a swap, it’s still proved a costly deal. It’s believed they have continued to pay 75% of his salary at Inter amounting to nearly £14.5million. The overall cost of Sanchez’s wages now stand at £47.6million – more than £9million per United goal.

‘I welcomed Alexis Sanchez coming to the club. He was tenacious and a forward who could play anywhere across the line,’ admitted Gary Neville on Sky Sports.

‘But he’s been an absolute disaster. I have no idea what happened to him. They needed to get him out the club.’

The big question is what happens next. Sanchez, now 31, will either return to Old Trafford, go out on loan again or United can find a permanent buyer. All have potential difficulties. 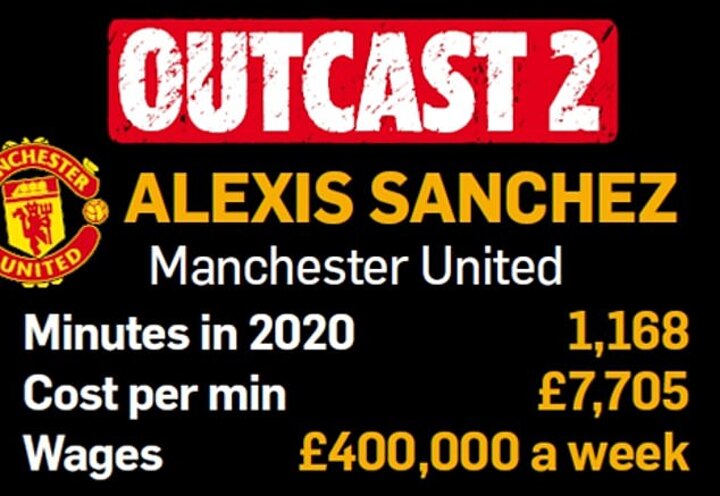 It looks clear that Sanchez would not welcome having to play in Manchester again even though United can enforce it as they hold his registration. Not that Ole Gunnar Solskjaer would see him as a regular in any case.

Since Sanchez has been away, the United boss has successfully transformed the culture at Old Trafford based around younger, hungry players like Marcus Rashford, Bruno Fernandes and Mason Greenwood.

The forward has shown improved form of late in Italy to tempt Inter into making the move permanent. The stumbling block is that United want a £15million transfer fee to recoup some of the money they’ve spent and Inter are reluctant to spend that and have to fund Sanchez’s wages.

Another loan might be the compromise deal but that’s not ideal for United either if they would have to continue paying some of the wages. It’s unlikely they’d want to pay as much as they have been doing.

The £47.6 million question is why it hasn’t worked out for Sanchez and United. He was after all regarded as one of the best players in the world at Barcelona and Arsenal.

Undoubtedly, some of blame is attached to the player himself. He’d gone off the boil in his final few months at Arsenal and found you can’t switch form on and off like a tap. United fans became exasperated at the amount of times he lost the ball. He couldn’t find a settled position either on the left or as a No10.

In mitigation, United were at a low ebb themselves. Though the team finished second the season Sanchez joined, Mourinho was critical of his players and then turned on the board when he didn’t sign a centre-half. He was sacked at the end of 2018, with Solskjaer brought in to introduce change.

By this time, injuries were becoming a factor for Sanchez. He’d had hamstring and thigh problems under Mourinho. He missed two months in early 2019 with a knee problem. Solskjaer decided he needed players he could rely on and last summer the subsidised move to Serie A was in everyone’s best interests.

Mesut Ozil is set to sit out next season on his £350,000-a-week salary at Arsenal and sees no reason why he should move, according to sources in the dressing room.

Mikel Arteta appears to have given up on the playmaker, having not used him since football got back underway.

Ozil was allowed to fly to Turkey as he was not in Saturday's FA Cup final squad but won’t budge from his position that he will stay next season, meaning Arsenal will pay almost seven per cent of their wage bill to a player who potentially won’t be picked.

Ozil will pick up around £18million in the last year of his contract and the club will clearly move him on if possible, but there are no suitable suitors.

China has been ruled out mainly because Ozil raised the plight of the Uighur Muslims in the country, which incurred the wrath of the Chinese government. MLS salaries in the USA are also nowhere near what Ozil commands. Basaksehir, the Istanbul club with close ties to Turkish president Recep Erdogan, is perhaps the only team that might consider a move. Erdogan was best man at Ozil’s wedding but signing him will be another level of financial commitment and require a huge contribution from Arsenal.

And although Ozil is closely tied to the country of his grandparents, those that know him say he is happy in north London and focused on returning to training and being available if Arteta changes his mind.