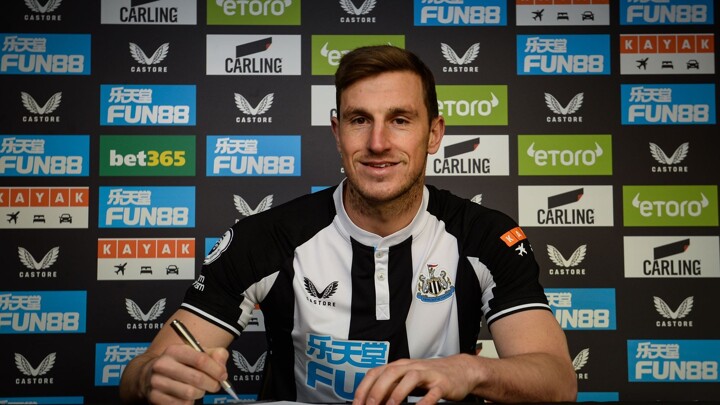 Wood has signed a two-and-a-half year contract and arrives in time to feature in Saturday's Premier League clash with Watford at St. James' Park.

Wood will wear the number 20 shirt - the first number he wore for his country. The Auckland-born forward has scored 27 goals for the All Whites in 60 international appearances.

Chris Wood said: "This is a very exciting opportunity for me and I'm delighted to be a Newcastle United player.

"I have played at St. James' Park a few times and it's an amazing place, so to have the chance to represent this club with those incredible supporters behind me and my team-mates is very special.

"The club and manager have been first class during this process, and I really can't wait to get onto the pitch and repay the faith they have in me, especially with a vital part of the season ahead of us."

Newcastle United head coach Eddie Howe said: "Chris is an important signing for us at a crucial time and I'm very pleased we have been able to move quickly and bring him here.

"He is a very dangerous attacking threat, has a physicality and character that I really like, and he has vast experience in the Premier League. He will be a great fit for us."

Wood began his career in his native New Zealand with clubs in Auckland and Hamilton before a successful trial saw him move to England with West Bromwich Albion in 2008.

After impressing at youth level and breaking into the first team, he enjoyed loan spells with Barnsley, Brighton, Birmingham City, Bristol City, Millwall and Leicester City, eventually completing a permanent switch to the Foxes in January 2013.

He helped Nigel Pearson's side to the Championship title during the 2013/14 season and was loaned to Ipswich Town in February 2015 before a move to Leeds United followed that summer.

Wood netted 44 goals in 88 appearances in a Leeds shirt - including an injury-time equaliser at St. James' Park during the Magpies' successful Championship-winning season - and he was soon snapped up by Burnley in summer 2017 for a then-club-record fee.

He moves to St. James' Park after four-and-a-half years at Turf Moor, during which he helped the Clarets to become an established top-flight side with 49 goals in 144 Premier League appearances.