Manchester United have earmarked Declan Rice as a top midfield target for the 2022 summer transfer window, according to reports. 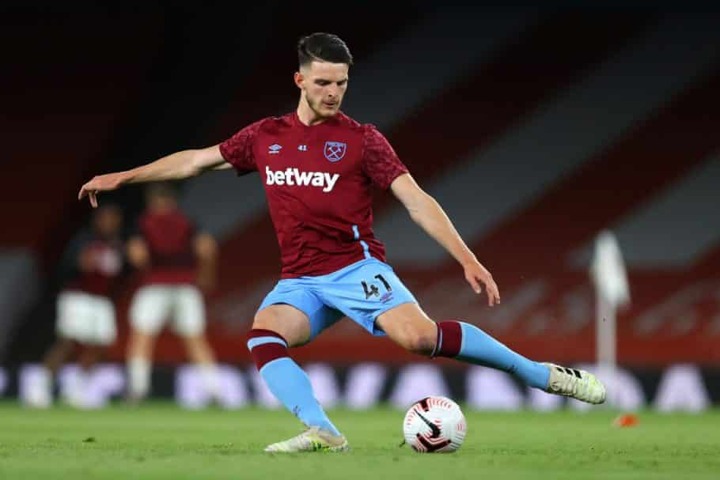 Manchester United had one of the best 2021 summer transfer windows of the 20 Premier League clubs.

Jadon Sancho and Raphael Varane have been brought in to strengthen two previously weak areas of United’s team.

Cristiano Ronaldo was also brought in during the final week of the window and is no doubt set to improve United’s attacking threat.

But despite a pretty successful window, there is still one glaring issue Man United need to address in their squad, which is, of course, defensive midfield.

There are a couple of reasons for this, but the main one is so that Ole Gunnar Solskjaer can actually play Bruno Fernandes and Paul Pogba in the same midfield three without being too exposed defensively.

Pogba is a quality midfielder but when played in a pivot alongside Fred or Scott McTominay, it is safe to say United look very vulnerable.

The easy solution to this would be to sign a top-quality defensive midfielder, something United currently do not have on their books.

But now, as mentioned above, a recent report from the Manchester Evening News suggests that this is exactly what the Red Devils will be doing next summer.

As per the Manchester Evening News:

Rice is currently contracted to West Ham until 2024 but he is not expected to sign a new contract, which would leave him with just two years left to run on his deal in the summer.

Rice, despite still only being 22, has a wealth of Premier League and international experience and would, on paper, be the perfect signing for United.

No potential fee is mentioned in the report but it is hard to see the Hammers letting him go on the cheap.