British actor Tom Holland was awestruck when he met Lionel Messi during the 2021 Ballon d'Or ceremony earlier this week.

Holland, renowned for playing the comic book superhero Spider-Man, was one of the special invitees for the ceremony which took place in Paris. The 25-year-old actor met Ballon d'Or winner Lionel Messi and was in awe of the Paris Saint-Germain forward. The video for the same can be seen below:

The latest film in the Spider-Man franchise, Spider-Man: No Way Home, is scheduled for release later this month. The film's lead actors, Tom Holland and Zendaya were invited to the 2021 Ballon d'Or gala ahead of the film's release.

Lionel Messi finished ahead of the likes of Robert Lewandowski and Jorginho to win his seventh Ballon d'Or award at the ceremony. The 34-year-old forward is now two Ballons d'Or clear of his nearest rival Cristiano Ronaldo.

Messi scored 613 points, 33 more than Lewandowski, who finished second in the standings. The 34-year-old forward guided Argentina to their first Copa America title since 1993. This was the primary reason for Messi securing his seventh Ballon d'Or trophy. It is worth noting that the forward is also the first PSG player to ever lift the prestigious "Golden Ball."

Lionel Messi had a decent 2020-21 club season with Barcelona. In his final season with the Catalan giants, Messi scored 38 goals and provided 18 assists in 48 appearances across all competitions. The Argentinian skipper won the 2021 Copa Del Rey with Barcelona, which was incidentally his final trophy in Spain. 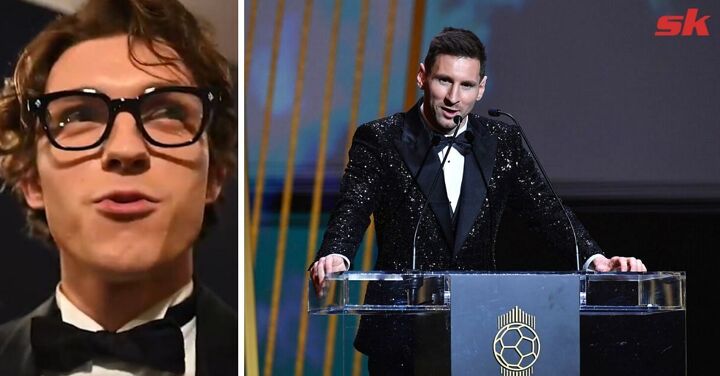 Lionel Messi took to Instagram to express his delight after winning the Ballon d'Or trophy for the seventh time in his illustrious career. The 34-year-old forward thanked the support staff and teammates at Argentina, Barcelona and PSG who helped him have a great season.

"Although I always put the collective forward, I cannot hide my joy at having been able to win another Ballon d'Or. I want to thank and dedicate to all my colleagues and @afaseleccion staff for the beautiful year we are living. Also those I had at @fcbarcelona and those at @psg."

The Argentine also thanked his family and friends in the post.

"And of course to my family and friends, as well as to all the people who support me, who are next to me, take care of me and make me perform every day: without all of them this would never have been possible. And thanks also to @francefootball for the Gala and the award. Big hug!!!"