Were it not for an injury crisis at Bayern Munich, Alphonso Davies probably would not be where he is today. 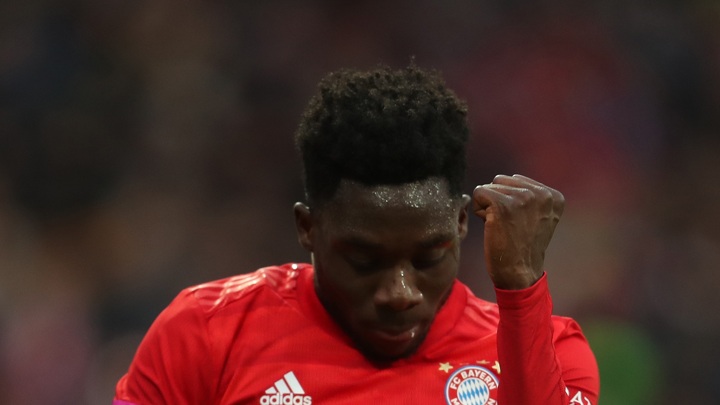 The Canadian teenager moved to Germany as a left-winger, having taken Major League Soccer by storm with eight goals in 31 appearances in his final season with Vancouver Whitecaps.

After turning 18, he became eligible to take to the field for Bayern, but his initial appearances were limited to cameo appearances on the wing and one half-hour stint as a nominal left-back in a 6-0 demolition of Mainz where no real defending was required.

This season, Davies was finally handed his first start, but as a makeshift left-back against Union Berlin with David Alaba left on the bench after returning from injury and centre-backs Niklas Sule and Lucas Hernandez sidelined.

These injuries meant Alaba slotted in at centre-back the following week, leaving Davies in his new position, where he has remained ever since.

The 19-year-old held down that spot under Niko Kovac and then under successor Hansi Flick, who believes that Davies can perform just as well as Alaba in the position.

"I’ve always been confident Davies can fulfil the role of left-back," Flick said during the winter break. "He’s our get-out-of-jail-free card with his pace and strength to recover his position, and he’s a great passer of the ball.

"It’s about performances, but we’re certainly well equipped at left-back with him and David."

With Sule ruled out for the rest of the season, Alaba will likely continue at centre-back, leaving Bayern's 'get-out-of-jail-free card' with a monopoly on the left-back spot.

Left wing is a crowded area at the Allianz Arena - Ivan Perisic, Philippe Coutinho, Serge Gnabry and Kingsley Coman can all play there - but even if choices were limited, Davies has proven he has what it takes to become one of the world's top left-backs.

Bayern Munich reserve coach Sebastian Hoeness worked closely with Davies before he became a first-team regular and was fully aware of his enormous potential.

"Phonzy is now one of the top performers on a regular basis," Hoeness told Goal.

"If his development goes on like this, he certainly has the potential to advance to the top of his position internationally.

"He showed that it can be worth throwing the boys into the cold water and giving them the opportunity to swim freely.

"He previously played in the second team and indicated to me his great potential. He was always motivated and tried to get involved."

Davies' impact at left-back has been closely monitored by Alaba, who has become his mentor at the club and expanded on Hoeness' swimming metaphor when describing how the 19-year-old has dived in head-first into senior football.

"I was thrown in at the deep end very early, maybe even younger," Alaba told Sport1. "So it's nice to see him swimming so freely! He is doing really, really well.

"He's a boy who wants to develop, who listens and can be guided in training sessions. He's a player who is very brave, and he improvises well. You need that at the top level these days and he really does it very well."

These are sentiments echoed by Bayern sporting director Hasan Salihamidzic, who saw Davies as one of the best players in the world at any position for his age group.

"We signed Alphonso Davies a year ago because we saw him as one of the best players of his generation," Salihamidzic told AZ.

"The fans have been waiting for a young player like him with such raw pace, technique and a physical presence. He can become a really important player for Bayern.

"Davies possesses qualities that you rarely see in the Bundesliga - he’s certainly one of the fastest players I’ve ever seen, maybe even the quickest.

"He can play anywhere the coach wants him to. He's not only one for the future, but one for the here and now - he's a real diamond." 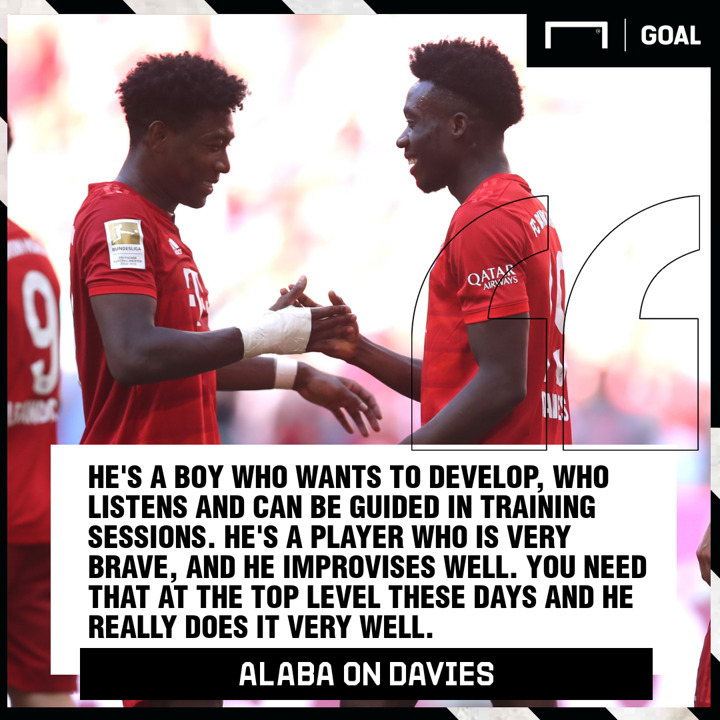 The qualities that made Davies a potent winger in MLS are what has helped him succeed in the fast-paced Bundesliga environment. He is strong for his age, but his ability on the ball means he is as comfortable beating defenders as he is at taking the ball from opposition widemen.

"Obviously, his physique is one of his great strengths," Hoeness continued. "He is a model athlete: fast and also very robust.

"Accordingly, his body is his greatest weapon. He is also a left-footer who works well from a technical point of view, even at the highest speed.

"The fact that he mostly played at the front during his apprenticeship now benefits him as a left-back."

Initially, Davies would tell reporters that he still had aspirations to play on the wing again, having only played there sporadically at Vancouver or with Canada, but now he is happy to be Bayern's new face at full-back.

"I don't have a preference. Wherever the coach wants to put me. Up, down. It doesn’t matter. I'm able to give 100 per cent."

Having accidentally unearthed a diamond at left-back, Flick will likely keep the young Canadian in that spot for the foreseeable future.

He would be crazy not to, as the 19-year-old's transition to the position has gone swimmingly and he will only continue to get better and better.