Bayern Munich have hit a rare patch of below-par form but Hansi Flick expects the Champions League tie with Lazio on Tuesday to refocus minds. 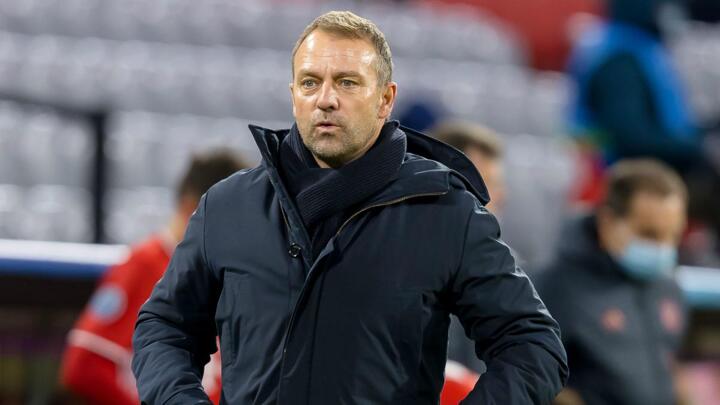 Hansi Flick expects Bayern Munich to be "especially motivated" for their return to Champions League action and insists he makes no excuses for the team's recent dip in form.

Die Roten followed a comeback 3-3 draw against strugglers Arminia Bielefeld with a disappointing 2-1 defeat to Eintracht Frankfurt over the weekend.

Those results have seen Bayern's lead in the Bundesliga trimmed to just two points, with RB Leipzig now within striking distance in second place.

On Tuesday, Bayern continue the defence of their European crown with the first leg of their last-16 tie against Lazio in Rome, a match head coach Flick expects to focus some minds.

Flick: These are special matches for us"

"I'm not someone who looks for excuses. The first half was not good against Bielefeld and Frankfurt. We had a lot of games, but other teams did too," Flick told a pre-match news conference.

"We need to be in top form in the Champions League. These are special matches for us and I'm expecting the team to be especially motivated.

"We have an idea of how we want to play. We want to start showing that from the start of games. I have complete confidence that the team will do that on Tuesday."

One of the few positives Bayern could take from the Frankfurt defeat was the return of Leon Goretzka, who has now recovered from coronavirus and a minor injury.

The midfielder helped contribute to an improved second-half showing after coming on as a half-time substitute and Flick intends for Goretzka to start against Lazio.

"You can't take it for granted coming back from an illness like that. He'll play from the start," he added.

"We'll see how long it can hold out. We hope he can perform like he did in his 45 minutes against Frankfurt. He's good for our game."

Flick also confirmed centre-back Niklas Sule will travel to Rome on Tuesday, adding: "We have a few players carrying knocks, Niklas Sule is one of them.

"We gave him a recovery day today and he'll travel tomorrow."