More than three years after his arrival at Newcastle United, not everything in Joelinton’s life is perfect. Some people, for example, are still getting his name wrong. It’s not just the pronunciation. It turns out everybody gets that wrong. But his actual name. 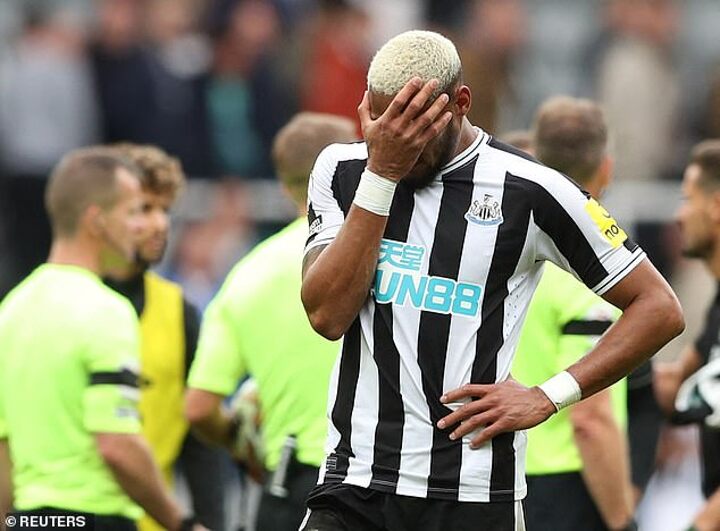 ‘The way people say it, I don’t mind,’ Newcastle’s Brazilian explains to Sportsmail. ‘I am in England. I have to adapt to the fact people speak differently here. But I don’t like it when people separate it. Like at hotels and places. Lots of times. I am not Joe Linton. I am Joelinton.’

The 26-year-old delivers this story with a shrug of the shoulders and a smile. Still, it takes a moment to realise what he means, that sometimes he finds himself checked in to a hotel or welcomed to a restaurant reservation as Mr J. Linton. ‘Yes, that’s it,’ he laughs. ‘Joe Linton. I don’t like that bit so much.’

On the scale of the things Joelinton has dealt with in England, this rates as an occasional pain. As for the serious stuff, the curve of his career continues upwards. But had it not been for something that happened at 7.39pm on Tuesday, November 30 last year, Joelinton may no longer be playing for Newcastle. Certainly there would be none of the cult hero status he now enjoys.

Had Newcastle defender Ciaran Clark not been sent off nine minutes into a home game with Norwich last season, there would have been no need for new manager Eddie Howe to move his big, struggling Brazilian centre forward back into midfield as part of an urgent reshuffle. As such there may have been no resurrection. One of the most remarkable recent stories of the Premier League may not have been written.

At the time, it was a tactical switch born of necessity. Eighty minutes is a long time with 10 men and it was a move that enabled Howe’s team to take a 1-1 draw. More significantly, though, it unlocked something in Joelinton that nobody in England had recognised. In a stroke his career was transformed and a life was changed. 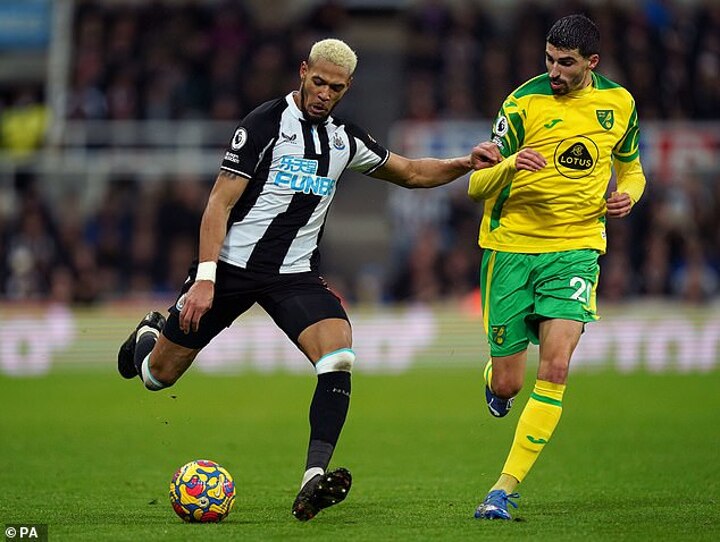 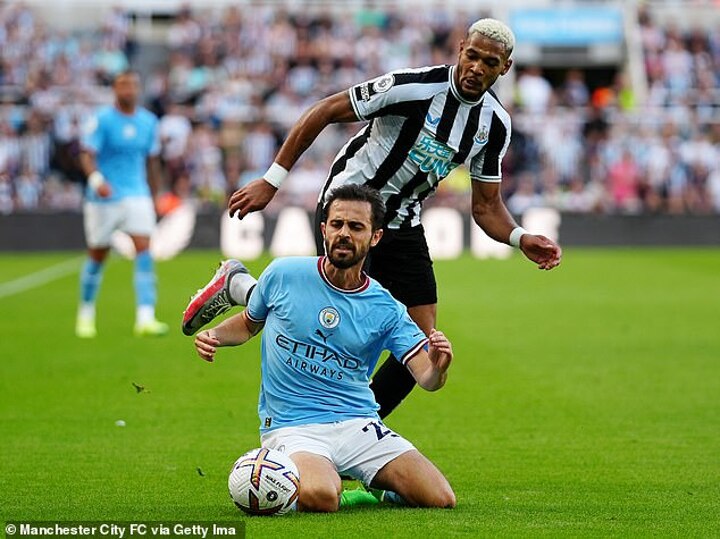 Before that cold night at St James’ Park, Joelinton was a £40million record signing who was not up to it. In the two seasons or so he played as a central striker since arriving from Hoffenheim in Germany, he had scored seven goals in 81 Premier League appearances. When he did score —against Rochdale in the FA Cup in January 2020 — The Independent recorded it pithily. ‘Even Joelinton scored,’ it said.

Things were bad back then. Joelinton was living alone in a city apartment with only criticism for company. Steve Bruce’s Newcastle team was poor and Joelinton was its unfunniest joke. ‘I did think maybe this wasn’t my place and that I should go somewhere else,’ Joelinton nods. ‘Sometimes that’s the easy way. But you have to be resilient so I chose that. I am glad now that I did.’

Almost a year on from that night against Norwich, Joelinton is still in Howe’s midfield and flourishing. The club’s Player of the Season last year, he is now a fundamental part of Howe’s vision. Whether the Newcastle manager is a genius or just got lucky that night is up for debate. ‘He’s a genius, of course,’ laughs Joelinton. ‘He is to me, anyway.’ Would he have played me in midfield one day without what happened against Norwich?

‘When he came here he saw me train in different positions. So maybe he knew I could. But I have no idea. You will have to ask him.’ The story of Joelinton’s resurrection at Newcastle is more nuanced than previously portrayed. The first thing you notice up close is how big he is. He is a tall man with the thick, powerful build of a traditional English No 9 and maybe this is what confused Newcastle. For the man they broke the bank for in July 2019 was never really a centre forward at all. 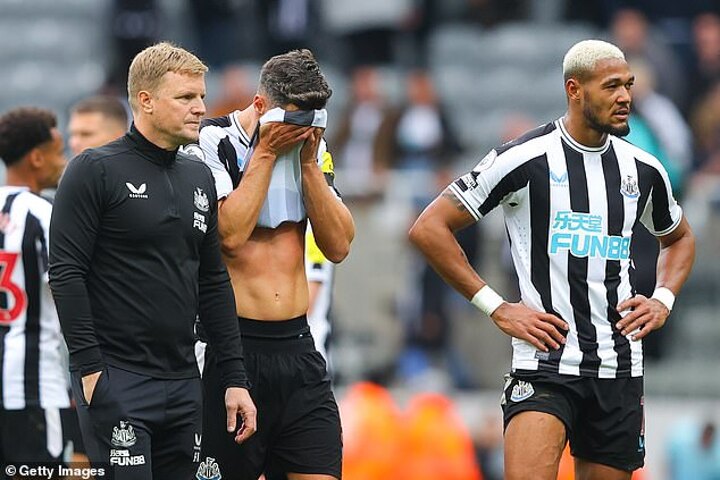 Joelinton had played the position as a youngster at Recife on Brazil’s north-east coast but only briefly. Under Julian Nagelsmann at Hoffenheim, he had played wide in a three-man attack or as a No 10. The records show he played as a through-the-middle lone striker in Germany precisely once.

Joelinton himself is slightly more generous. ‘I played that position three times,’ he says.

It is perhaps symptomatic of just how dysfunctional Newcastle were back then that a club often criticised for parsimony finally decided to pay all that money for a footballer who they then played completely out of position.

At Hoffenheim, Joelinton had been a fundamental part of Nagelsmann’s high press, eagerly hunting down the ball. Then, at Newcastle, he found himself one of the sole outlets for a team asked to defend deep by manager Bruce and play longer passes.

‘It wasn’t easy,’ reflects Joelinton. ‘This league is difficult anyway and the formation we played didn’t suit me. Of course, I accept some blame for not doing well. It wasn’t just the tactics.

‘But it wasn’t easy because of the way we played. I had that year at Hoffenheim with Julian in a very good formation and with a very clear game plan. That was very different from how it was here. I always preferred to have more freedom rather than just be the team’s reference point in the box. 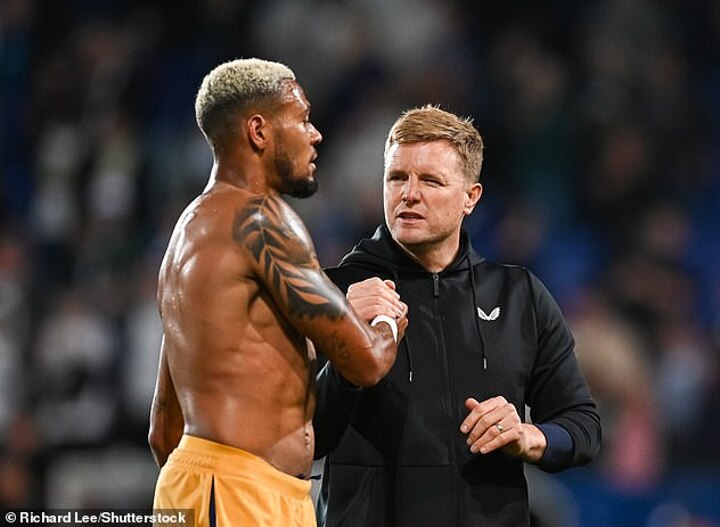 ‘But they bought me as a No 9 and I had to play there. It was difficult but I always tried my best. I wanted to help my team-mates. Sometimes it worked and other times it didn’t. I just wanted to keep going. I have never run away from challenges. That isn’t me.’

Learning this now, it is easier to understand the mystery of just how quickly Joelinton took to his new role under Howe.

Playing his midfield position in a 1-1 home draw against Manchester United a month after the Norwich fixture, the Brazilian emerged with the man of the match award on the back of stats that showed him ranked first for tackles, touches, ball recoveries, aerial duals and passes and second for interceptions. It seemed almost unfathomable that he should have adapted so quickly. On reflection, there was less to learn than we thought.

‘At Hoffenheim, it was easy to participate in the game as the coach gave me freedom and also I had a role when we defended,’ Joelinton nods. ‘I played more in the middle and you get more confrontations there, more one-on-ones. I did very well at that time so, yeah, I think that helped here too.

‘It wasn’t something I felt was strange. I had done it before, really. I’m quite good tactically. What the gaffer asks me to do here is not a problem. I have his confidence and I have a will to play well. I like the position as I touch the ball more. As a striker you can hardly see it. You are just up there, waiting.’ 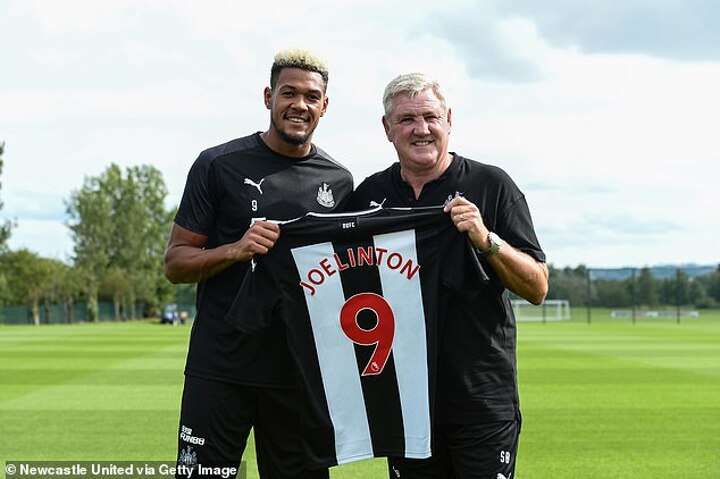 Joelinton is a footballer comfortable in his own skin once more. He got engaged to his girlfriend Thays in the summer and will be married next year. The family — with son Neto and daughter Julia — are all living close to the city now. Joelinton started learning English from a tutor during a loan spell at Rapid Vienna and has continued that here. This interview takes place without a translator.

He has always felt welcome at Newcastle, even during the difficult times. Social media was not a good space for him back at the start but real life was different.

‘Since I came I’ve felt how much the fans love this club,’ he says. ‘I see supporters in restaurants and when I’m shopping, or when I drop my son at school in the morning. They are amazing. There is a lot of talk and a lot of love! They always used to tell me to keep going when it was hard and that they appreciated the effort I was making each game, even when it wasn’t going well. It was difficult at that time, I won’t say otherwise. I didn’t watch the TV or read the newspapers but I knew the pressure was high.

‘I could see things on Instagram and the internet. I’d look and see the negative things but I tried to keep my mind very positive. That didn’t always work, though. It was hard and I did wonder if I had made a mistake to come here.’ 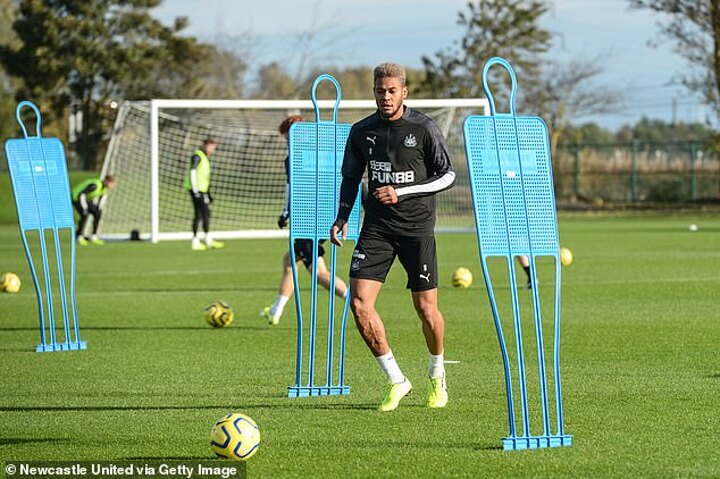 On Joelinton's forearm is a tattoo written in Portuguese. It means ‘Be Strong And Brave’ and was inked last season after much of the hard work of his English career had already been done. ‘I like the message a lot,’ he says.

Working with a personal trainer at home once a week to ensure his huge frame remains mobile, Joelinton also has sessions on Zoom with a tactical analyst in Brazil.

His father, Jorge, worked on a sugar cane plant in Brazil, returning home to the family at weekends. It is from him Joelinton feels he inherited his appetite for work and his selflessness. From his mother, Silvania, came discipline.

‘She always told me if I didn’t concentrate at school then I couldn’t play football,’ he says. ‘Where I come from, we always worked hard. My dad worked to give me something and I am in the Premier League, where I always dreamed to play.

‘I remember everything I had in my life. The good times and hard. I’ve come through difficult times before. I went to Germany and didn’t play for a year. In Austria it was difficult but I got through. Here it was the same. I told myself to keep working because good things will come.

‘Most strikers are selfish. They have to score. But I was never like that. I would always pass. It was like that since I was a kid. Maybe that attitude has helped me.’

Evidence of the South American’s popularity in Newcastle is easy to find. A huge flag of Joelinton’s shirt superimposed on Rio’s Christ the Redeemer statue now adorns the Gallowgate on matchday, while at the end of last season he invited a fan to his house after learning he had tattooed a picture of his favourite player’s face on to his stomach. The two men’s children ended up having a kickabout in Joelinton’s garden. ‘I wanted to give him something to remember, given that he had gone so far as to have my face on his body,’ smiles Joelinton. 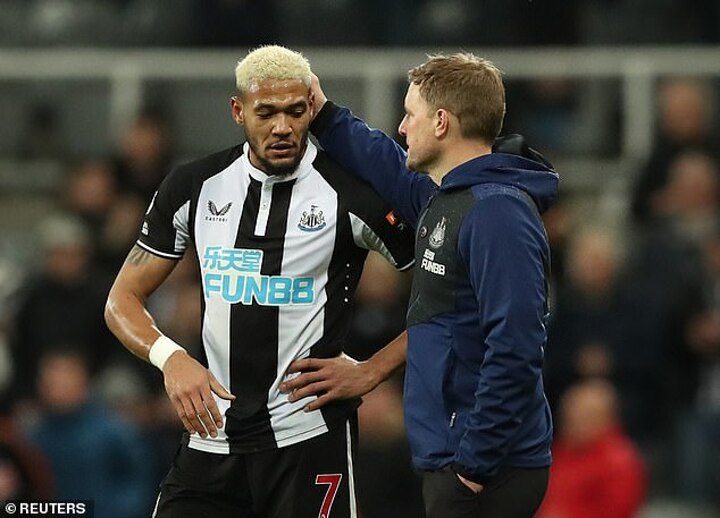 Newcastle are at Fulham on Saturday and, having not won in the league since the opening day, could do with a result. Howe’s squad has been left light of forwards due to injury, leading to talk that Joelinton may be asked to play further up the field again.

‘I think Callum (Wilson) could be back!’ he laughs. ‘But if the gaffer wants me to play there I am ready. I will play at right back if he wants me to because when the team wins, everybody wins.’

A possibly apocryphal Tyneside story has it that Howe outlined his plans for Joelinton as part of a detailed tactical presentation he made to the club’s new owners at interview. Whatever the truth of that, Joelinton’s Newcastle story is uplifting. That night against Norwich 10 months ago, he saw absolutely none of this coming. ‘When the red card happened, I actually thought I would be the one to be substituted,’ he recalls. ‘Instead the gaffer put me in that new position. I thought, “OK, cool, do your best”. I am here to help.’

As we talk at Newcastle’s training ground, Kieran Trippier walks past and overhears the discussion about Joelinton’s name.

‘He’s an honorary Englishman now,’ laughs the right back. For the record, it is not pronounced Joel-inton. It is Joelint-on.