Club Brugge endured a humiliation at home on Wednesday in the Champions League, slumping to a 5-0 loss to Leipzig that ended the Belgian champion's hopes of progressing to the knockout stage. 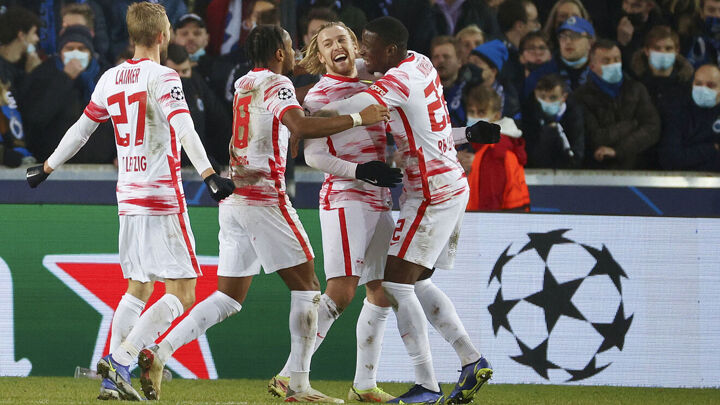 The win lifted the German side to third place in Group A, level on four points with last-place Brugge. Both teams can't finish in the top two and can only hope for a spot in the Europa League.

Brugge, which was handed a third straight loss in the tournament, got off a nightmare start and trailed 3-0 after just 26 minutes. Both Emil Forsberg and Christopher Nkunku scored twice, with Andre Silva also on the scoresheet for Leipzig.

Leipzig was missing several key players - including captain Peter Gulácsi who tested positive for COVID-19 - but it didn't show.

The German side camped in Brugge's half with a strong press and quick passes that destabilized the hosts' defense. Playing in a 3-4-3 system, Brugge was constantly overwhelmed and dispossessed throughout the first half.

The home side's lack of focus was on display in the 12th minute when Leipzig deservedly took the lead. After Ignace Van der Brempt gave the ball away, a long pass slid between two Brugge players and Andre Silva connected with the ball. He fired a shot that 'keeper Simon Mignolet blocked, with in-form striker Nkunku slotting home from the rebound.

Forsberg made it 2-0 from the spot with a well-taken shot before Silva directed his header inside the far post from Angelino's cross. The Spanish left back delivered a pinpoint cross for his teammate as home fans showed their frustration with whistles and boos.

The defensive debacle was complete at halftime, with Forsberg doubling his personal account in added time. The Sweden international was allowed too much space and moved freely toward the box unchallenged, then fired home from the edge of the area.

Brugge sdid better after the interval but could not find a cutting edge as Leipzig managed to add more luster to the win in added time through Nkunku.