Manchester City will step up their pursuit of Erling Haaland with the club set for talks with his agent Mino Raiola in January over a move to the Premier League next summer. 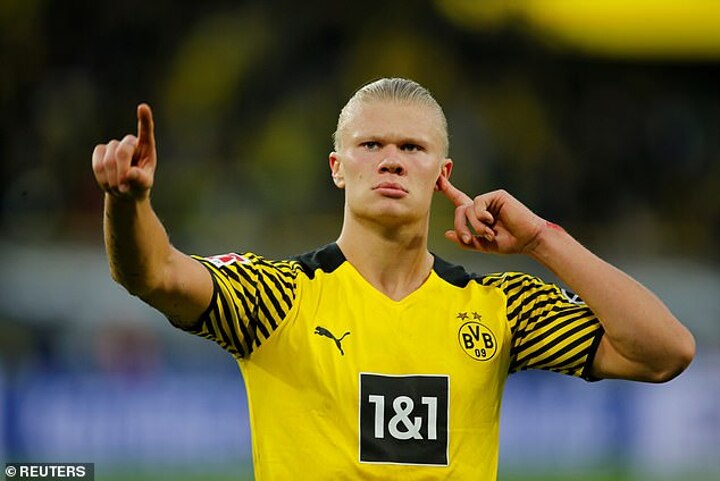 According to The Times, Haaland is now the top name on City's list of transfer targets and Pep Guardiola is looking for a new No 9 after the departure of Sergio Aguero last summer.

City, of course, launched an attempt to lure Harry Kane from Tottenham but while the England captain was keen to move, Spurs chairman Daniel Levy held firm.

The 21-year-old Haaland has a relentless scoring record with Dortmund, hitting 68 goals in 67 appearances so far.

But another factor that will appeal to City, and no doubt the rest of Europe's big guns, is that Haaland has a £64m exit clause in his contract that kicks in next year.

City's neighbours Manchester United have long been linked with a move for Haaland and their manager Ole Gunnar Solskjaer coached him while at Norwegian side Molde.

Chelsea were also linked with a move for Haaland last summer before eventually bringing Romelu Lukaku back to Stamford Bridge from Inter Milan.

The Norway striker would also be an option for Paris Saint-Germain, especially if Kylian Mbappe doesn't sign a new contract and leaves to join Real Madrid on a free transfer.

For now, it appears City are making steps to land one of the most coveted signatures in the game and they will be helped in no small part by the fact Haaland's father, Alfe-Inge, used to play for City himself.

City boss Guardiola has endured a tetchy relationship with Raiola, Haaland's agent, but that appears to be put to one side by both parties in the attempt to manufacture a move that would undoubtedly be one of the most significant of next summer.