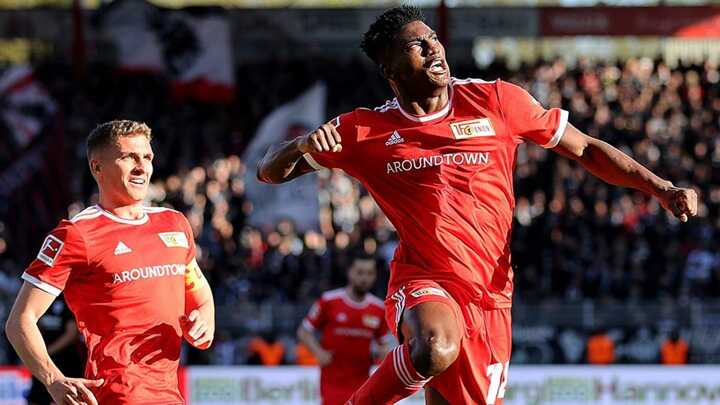 Nigeria star Taiwo Awoniyi scored a brace as Union Berlin claimed a 3-2 win over Bochum in their last Bundesliga game on Saturday.

After Grischa Promel scored the opening goal of the match in the fifth minute in favour of Berlin, Awoniyi added the second in the 25th minute.

Awoniyi scored the vital goal in the 88th minute to make sure Berlin – with 57 points and fifth on the log – ended the season on a winning note.

Nkunku, a Democratic Republic of Congo prospect, was part of the starting eleven but did not manage to score despite playing in the entire period of the league duel.

Janni-Luca Serra with an assist from Robin Hack, scored for Bielefeld in the 70th minute, before Nkunku’s side fought back and pegged the score to a 1-1 draw following Vilmos Orban’s goal in the third minute of added time.

The Ghanaian star came on as a second-half substitute as his club confirmed their place in the relegation playoffs.

Ishak Belfodil struck an 18th-minute penalty to give Hertha the lead, but the hosts recovered and eventually took all the three points courtesy of goals from Erling Haaland and Youssoufa Moukoko.

Haaland, who said goodbye to the Bundesliga outfit ahead of his move to Premier League side Manchester City, found the back of the net with a 68th-minute penalty.

Moukoko gave Dortmund the lead when he scored in the 84th minute with an assist from Jude Bellingham.

At WWWK Arena, Nigeria’s Dickson Abiama did not feature as Geuther Furth suffered a 2-1 defeat at the hands of Augsburg.

The Augsburg goals were scored by Daniel Caligiuri – whose 11th-minute penalty broke the deadlock – before Michael Gregoritsch scored the winning goal in the 84th minute. Abiama’s Furth scored their only goal in the 23rd minute through Jessic Ngankam.

Ufuoma was substituted in the 86th minute when they were already down courtesy of goals from Lars Stindl, Alassane Plea, Jonas Hofmann – who scored twice – and Breel Embolo. Hoffenheim’s only goal was struck by Andrej Kramaric.