Werder Bremen will hope to avoid any late slipups and finish second in the 2. Bundesliga table on Sunday to ensure a quick return to the top-flight. 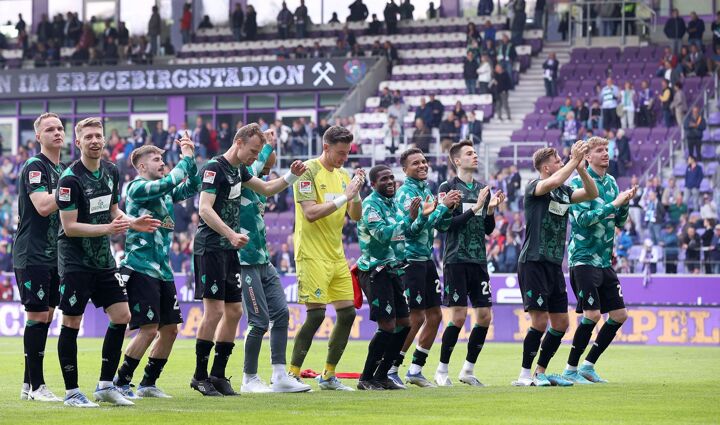 Ole Werner’s side have a game against Jahn Regensburg, who have nothing to play for in the division.

Werder Bremen have been in a mixed run of form, which has seen them drop to second in the league table. They put a shock defeat against Holstein Kiel behind them with a comfortable win against Erzgebirge Aue last weekend.

The Green-Whites are currently three points ahead of both Hamburg and Darmstadt, who occupy third and fourth positions respectively.

A win or a draw will ensure they finish second, so it’s hard to see Werner’s side dropping out of the top three.

The two teams have squared off just three times, with Werder Bremen winning all three games. The reverse fixture between the two teams was quite an entertaining game as Werder won 3-2.

Regensburg have been on a terrible run of form recently, having failed to win any of their last seven games. They will once again be massive underdogs against Werder.

Apart from Jean Manuel Mbom, everyone else in the Werder squad is fit, giving Werner a massive boost for the final game of the league.

Regensburg are expected to be without Sarpreet Singh. Alexander Meyer and Leon Guwara are also doubtful and might not feature.

Werder Bremen had the chance to finish top, but Schalke now have an unassailable lead at the summit of the table and have been crowned champions of the second division.

We expect Werder to finish second and avoid the promotion playoff spot this Sunday.