Football fans were left amused by Kepa Arrizabalaga's reaction to West Brom's opening goal during the 3-3 home draw with Chelsea. 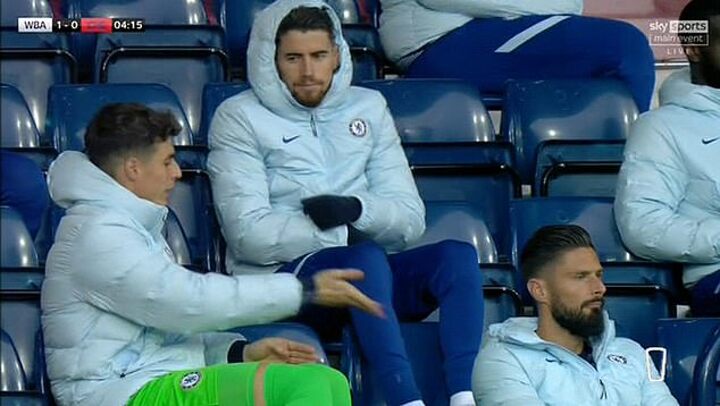 Kepa was dropped by manager Frank Lampard after he made two critical errors during Premier League clashes with Brighton and Liverpool, and the club moved to strengthen their goalkeeping options with the signing of Edouard Mendy.

The Frenchman was not ready in time to face the Baggies at The Hawthorns, yet Lampard still opted to select veteran Willy Caballero ahead of Kepa.

The exiled Blues keeper was pictured talking to team-mate Jorginho in the stands after Callum Robinson opened the scoring on four minutes. with fans claiming he was criticising Caballero.

Robinson's low shot flew through the legs of Reece James and towards the bottom right corner, but Caballero was unable to get down quick enough to make a save and prevent Chelsea from going behind.

One fan tweeted: 'I love Kepa analysing the goal in the stands... hilarious #irony'.

Another person sarcastically suggested Kepa may decide to put himself on as a substitute, alluding to the Spaniard's refusal to leave the field during Chelsea's League Cup final defeat by Manchester City in 2019.

Robinson doubled Albion's lead on 25 minutes when he stole the ball from Blues debutant Thiago Silva, this time finishing with his right foot.

The Baggies made it 3-0 when Kyle Bartley tapped in from a corner, but Chelsea were able to mount a fine comeback in the second half.

Mason Mount pulled one back 10 minutes after the interval when he rifled in from 20 yeards, and substitute Callum Hudson-Odoi netted the second before Tammy Abraham bundled over the line in stoppage time.