Manchester City can see the finishing line in sight with a 12-point lead at the top of the Premier League and just 11 matches remaining. 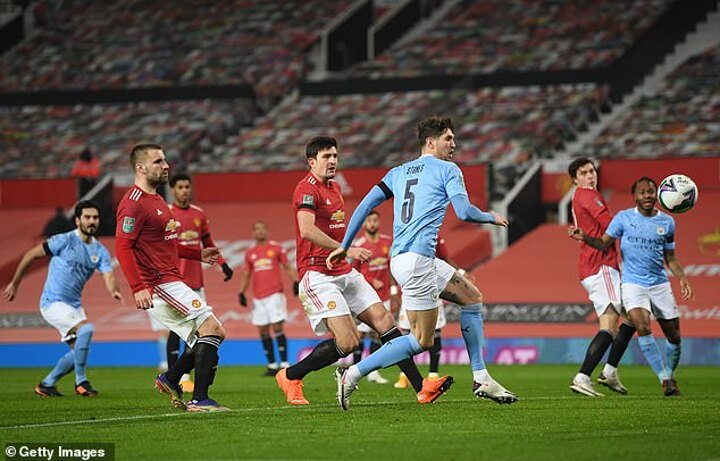 Pep Guardiola's side somehow continue to go from strength-to-strength amid their astonishing 21-match winning streak, and they will be confident of landing another knockout blow on their rivals this evening.

After talk of a title bid not so long ago, United have struggled to live up to the expectations and dropped more points on Thursday in a drab goalless draw with Crystal Palace, and they are now looking over their shoulders.

Here, Sportsmail takes a look at a combined XI between neighbours City and United, and it is some side, ahead of Sunday's crunch showdown at the Etihad.

If David de Gea was the goalkeeper he was a couple of seasons ago, this would be a very close call but City's No 1 Ederson easily gets the goalkeeping jersey now.

The Brazilian continues to impress in between the sticks for the champions elect thanks to his reliable shot-stopping and distribution with the ball, something that Guardiola desperately wants from his No 1.

And his ability on the ball was evident when he set up Ilkay Gundogan's second in the 3-0 victory over Tottenham on February 13, playing a pinpoint ball from his own box straight into the path of the German, who then eased past Davinson Sanchez before firing into the net.

Ederson has clearly been helped by those in front of him, but he has kept a brilliant 15 clean sheets in 26 games for City as they romp towards their third Premier League title in four years. The 27-year-old is set to be City's No 1 for many more years to come. 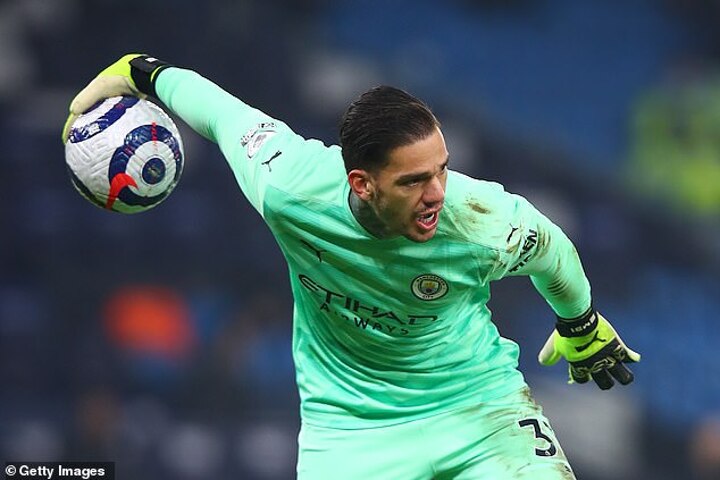 The man who appears able to do anything. Wherever Guardiola deploys him, the Portuguese star emphatically does his job both from a defensive and attacking point of view.

The former Juventus man, who took some time to get going in Manchester, has brilliant ability on the ball and has been a regular source of City's attacks, while he is tactically aware when the pressure is on his side.

He gets the nod ahead of Kyle Walker and United's Aaron Wan-Bissaka, who arguably is the best defensive right back in the Premier League, especially when it comes to the one-on-one situation.

But going forward is where Wan-Bissaka lets himself down and is the reason why he is yet to earn a cap for England - with the likes of Trent Alexander-Arnold, Reece James and Co much better in attack. 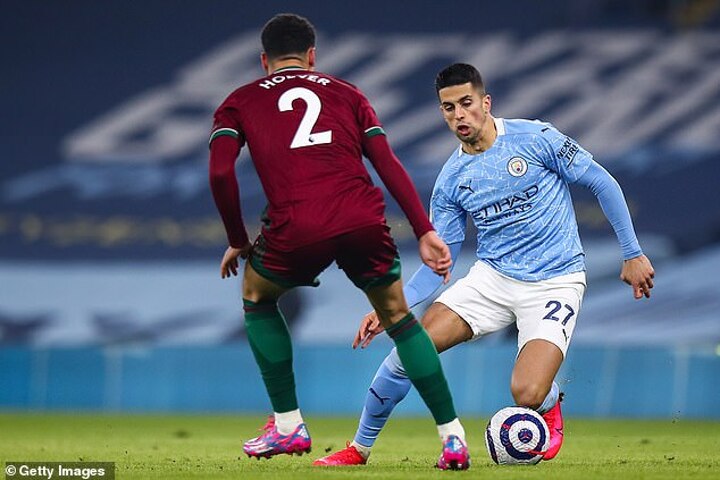 The centre-back options are arguably the easiest picks of the lot in this combined Manchester XI. Dias slots into the backline thanks to his incredible impact at the Etihad Stadium since arriving from Benfica for £64million.

Alongside John Stones, the pair have provided the perfect backbone for a City side close to capturing the title once again.

The Portuguese star, who has already earned some comparisons to City legend Vincent Kompany, offers that much-needed leadership and his defence-first approach has been a breath of fresh air for Guardiola - whose side came undone far too many times last season when the going got tough.

The 23-year-old has already had a similar impact to Virgil van Dijk at Liverpool, and he will marshall the City backline for a long time - and is surely in with a shout for Player of the Season. 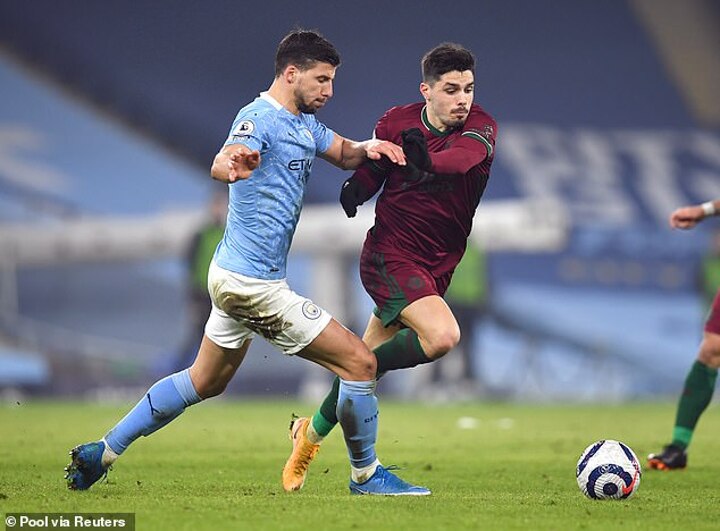 What a renaissance it has been for the English centre back, just months before the postponed Euro 2020 finals finally get underway this summer.

Due to injuries and poor form, not so long ago his City career appeared nearly over.

But Stones has come back from the brink to provide the perfect partnership alongside Dias - with the latter's aggressive defensive nature allowing the Englishman to flourish.

When City eventually wrap up the title, Stones and Dias will be rightly heralded for their incredible impact - with the Etihad outfit only conceding 17 goals in 17 matches, eight fewer than Chelsea, who have the second-best defensive record this season.

And when you look at the shaky performances put in by Harry Maguire and Victor Lindelof this season, this call is made even easier. 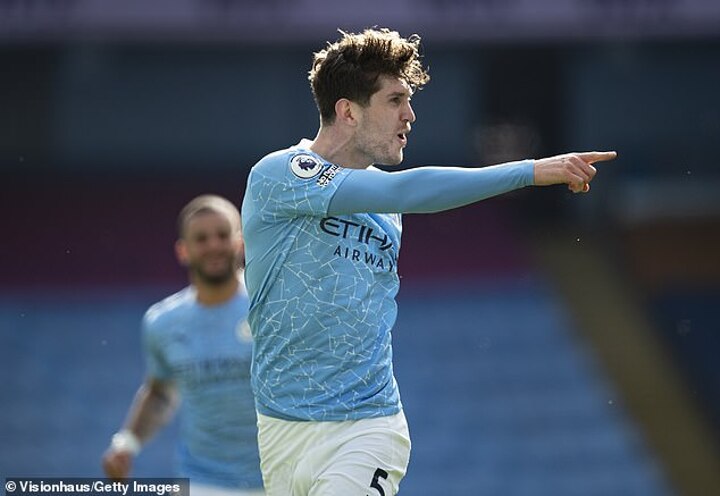 Similarly to Stones, fellow Englishman Shaw has enjoyed a brilliant resurgence and is now also in the frame for a spot in Gareth Southgate's Three Lions squad for this summer's Euros.

After difficulties under Jose Mourinho - who made clear his negative feelings about Shaw - the left back is now flourishing under Ole Gunnar Solskjaer who has put full faith in him.

The 25-year-old looks far more solid defensively now than in previous years while he has established himself as a vital cog in United's attacking play, thanks to his endurance and speed down the left flank.

The signing of Alex Telles last summer led many to believe Shaw could fall down the pecking order but he has responded in style and is proving everyone wrong thanks to his consistent performances at Old Trafford. 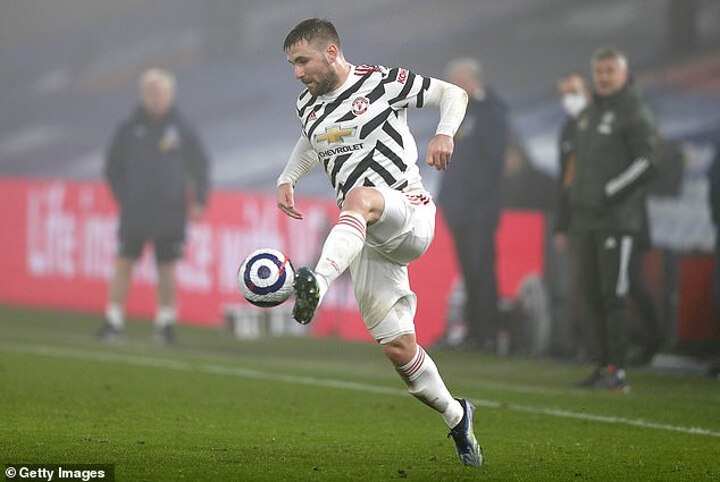 The Germany international has been City's go-to player in an attacking sense this season, taking on the burden from Kevin De Bruyne while the Belgian star was out with a hamstring injury.

He'll be right in contention for Player of the Season, perhaps even pipping Dias to the award, thanks to his constant goal involvements during City's incredible winning run both domestically and in Europe.

Gundogan has scored 11 goals from midfield for Guardiola's rampant side this season thanks to his late bursting runs into the penalty area - reminiscent of Frank Lampard's prime with Chelsea - while producing two assists.

And you wouldn't put it past Gundogan twisting the knife into United, against a vulnerable defence, come Sunday as they look to extend their lead at the top of the table. 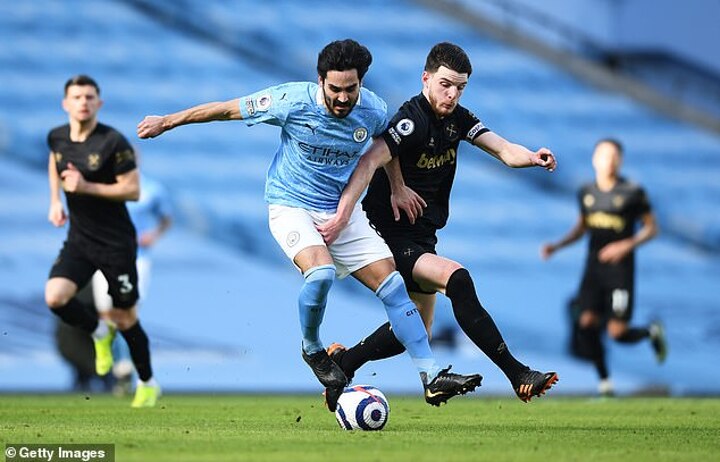 Fernandes' impact on United's team is unrivalled in the Premier League since a certain Eric Cantona. Since his arrival from Sporting Lisbon in January last year, he has turned them from top-four contenders into a side with bigger ambitions.

The Portuguese midfielder has netted an incredible 34 goals and notched 21 assists in just 62 matches. Who knows where United would be without him?

His magic on the ball and eye for the goal make him a nightmare for any opposition defence to deal with and he will be desperate to put City to the sword as United look to return to winning ways.

With the clever movement of Edinson Cavani and the pace of Marcus Rashford ahead of him, don't be surprised if Fernandes has a big influence this weekend. City will definitely have to be on guard. 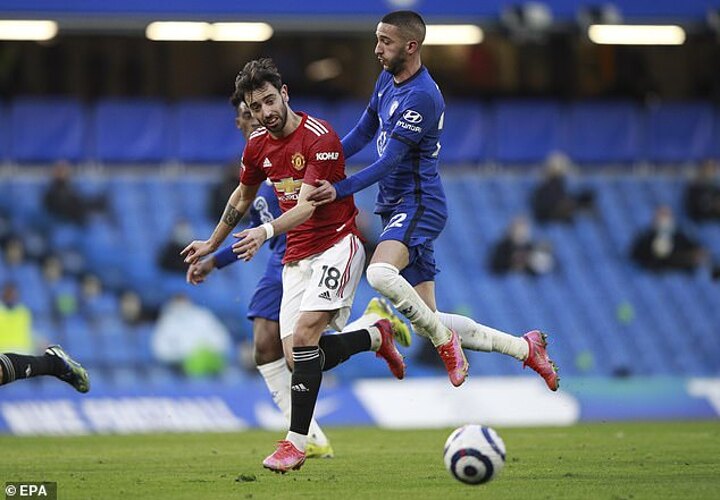 He has only recently returned to action following his hamstring setback, but the City midfielder on his day is the best player in the Premier League and United will certainly be wary of him.

The Belgian star's return to action has come at a brilliant time for Guardiola, with City approaching the business end of the season in the Champions League while they also look to lift the Carabao Cup title and wrap up the Premier League.

With Gundogan making his trademark late runs into the penalty area and the likes of Raheem Sterling and Co in front of him, De Bruyne will have plenty of field days between now and the end of the campaign.

There is no place for Paul Pogba in this midfield with the Frenchman still out with a thigh injury sustained in the 3-3 draw with Everton at Old Trafford at the beginning of February. 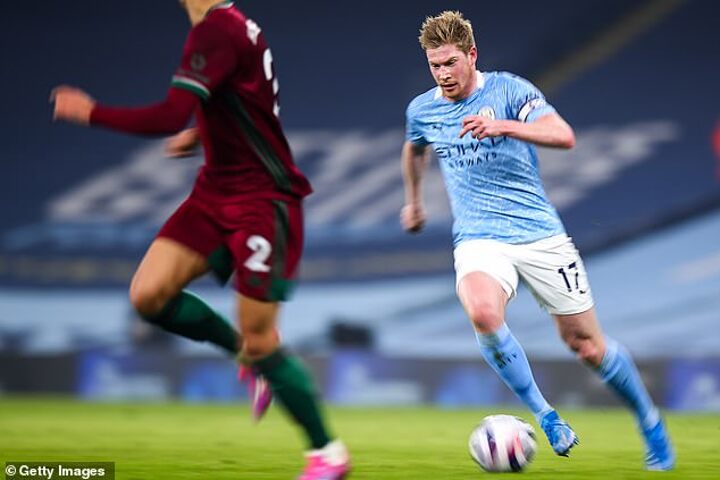 The Algerian winger has been in dazzling form in recent months for the champions-elect and Shaw will have to be at his absolute best to stop Mahrez impacting the final outcome on Sunday.

Against Wolves on Tuesday in City's emphatic 4-1 victory, Mahrez was at the heart of everything good Guardiola's side produced.

He set up the first thanks to a late run in behind Wolves' defence down the right before showing great footwork to dig the ball out of his feet and unlocked the backline with a brilliant through ball for City's second.

But he wasn't done there and his fine performance was rewarded with a goal of his own, smartly curling home into the bottom right corner for City's third - leaving Rui Patricio with absolutely no chance in the Wolves goal. 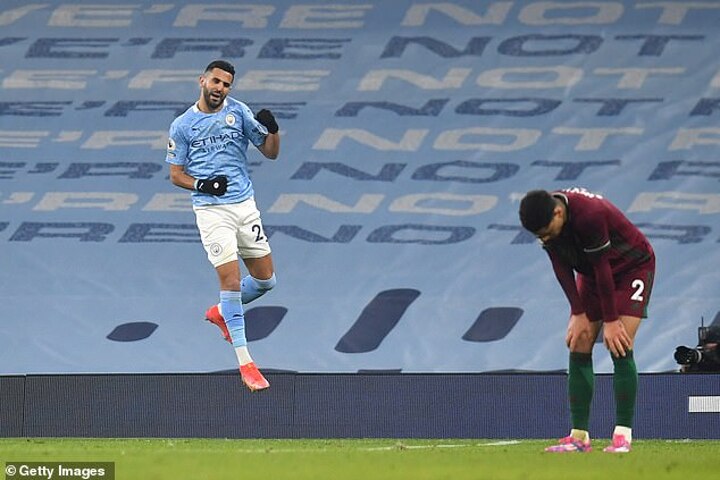 England international Sterling was another obvious candidate with United's attack shot of confidence currently. Again, another City player who has been in scintillating form of late.

Sterling has nine goals and five assists this campaign in the Premier League, which is not as good an outcome compared to seasons gone by, but he still terrorises opposition defences week in week out.

His clever movement in behind from the wing and his quick footwork make him a handful for any defender.

His match-up against Wan-Bissaka on Sunday will be interesting, with the latter known for his defensive prowess. But with the creativity of Gundogan and De Bruyne behind him, he will surely get a chance to punish United. 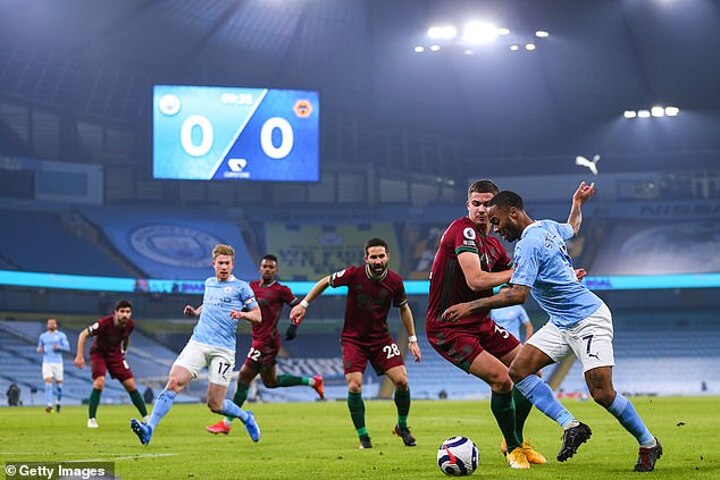 The Uruguayan striker just about pips Gabriel Jesus to the post. His experience and leadership has proved invaluable for the Red Devils.

United look much more composed up front when the former Paris Saint-Germain striker is on the field, and confidence flows through the team in the final third as a result.

The Uruguayan has shown his movement is still as a sharp as ever, and already a telepathic understanding is being strengthened with midfield maestro Fernandes.

Yes he will be coming up against a formidable defence on Sunday, but with his years of experience, Cavani will certainly know how to get at City. 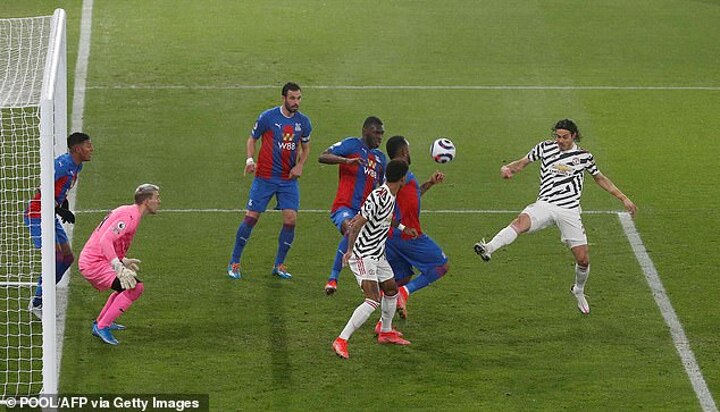 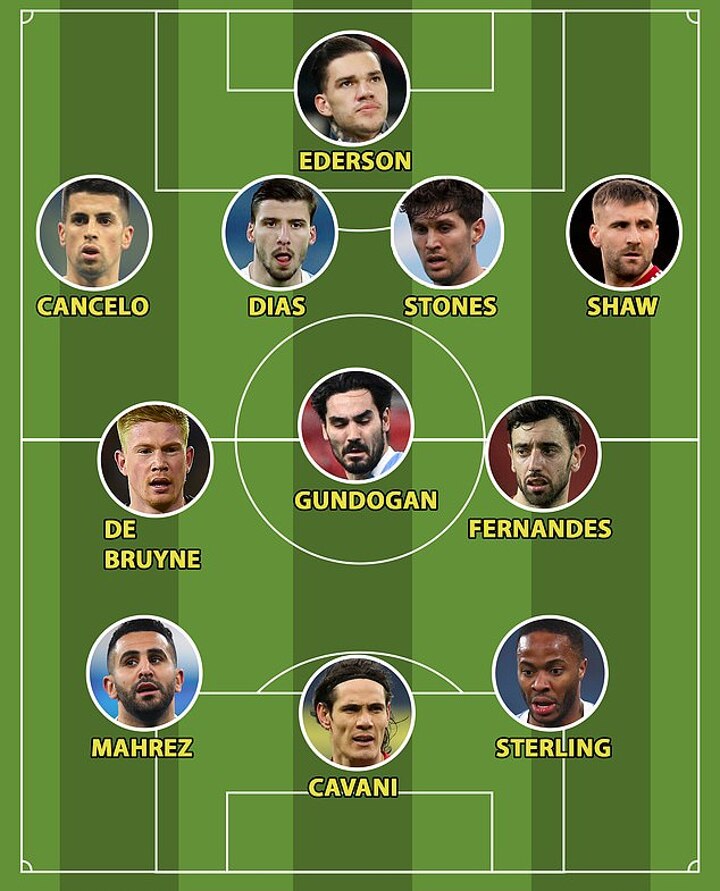