Jurgen Klopp insists Liverpool will never give up on the Premier League even if the Champions League offers them a better option to extend their run in Europe's top club competition. 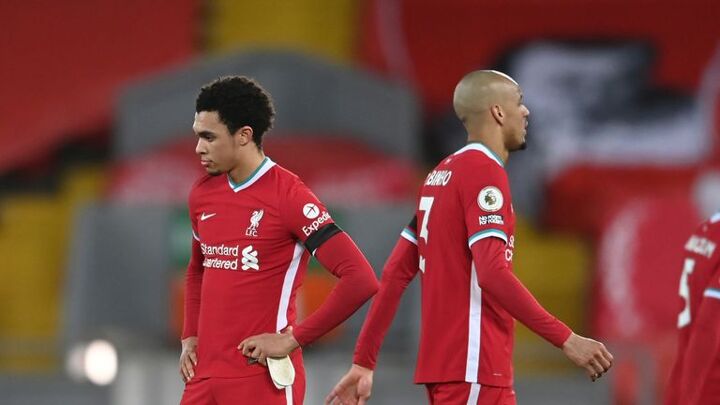 A haul of just 12 points from the last 39 available has seen Liverpool's title defence end with barely a whimper and has left Klopp's side fighting for a top-four finish.

Winning the Champions League would offer a route back into the Europe's premier tournament but there is still a long way to go on that front even though they hold a 2-0 lead heading into next week's last-16 second leg against RB Leipzig.

Klopp says he will not allow Europe to take their focus off the continued fight on the domestic front.

"We play Fulham and three days later we play Leipzig and we are not in the next round," he said.

"I can't think about winning the Champions League now as we have to go through this difficult round.

"This week we play these three games, late in the season, with two days in between, Thursday, Sunday and Wednesday, and it is tough.

"We see who we can field on Sunday and then who can play on Wednesday but it is not that we gave up on the Premier League, that will never happen.

"Liverpool is too big, too many people are interested. We don't play behind closed doors really without cameras, it is in front of our people and we feel the responsibility that in each game we have to give our absolute everything to win it.

"If that doesn't happen then people will think, 'That's not enough'. We don't change our attitude."

Klopp: Salah frustration at substitution is a 'normal issue'

Klopp says Mohamed Salah's frustration at being substituted during Liverpool's defeat to Chelsea on Thursday is a "normal issue" as he praised the forward's outstanding goal record this season.

Salah, who has scored a league-high 17 goals this season, was visibly unhappy, shaking his head, after being replaced 62 minutes into the Reds' fifth consecutive defeat at Anfield.

Klopp revealed after the match he had made the substitution because the Egypt international was "feeling the intensity".

Just after the substitution, Salah's agent Remy Abbas Issa posted a cryptic response to the change, tweeting out just a single full stop.

When Klopp was asked what he needed to do to ensure there is no lasting problem, he replied: "Talking. That's how it always is. I am not even sure if this situation is a reason for a 'proper talk' about it?

"We were 1-0 down, that makes no player happy, you go off and you can react in different ways because you are not happy about the general game.

"On top of that, you get subbed [as] a striker and you think you should stay on the pitch. That is all completely clear and a normal issue. It's just normal life."