Jesse Lingard has opened up on the troubles he endured when slipping out of favour with Manchester United and England, but is happy to be through those dark days and working towards a brighter future. 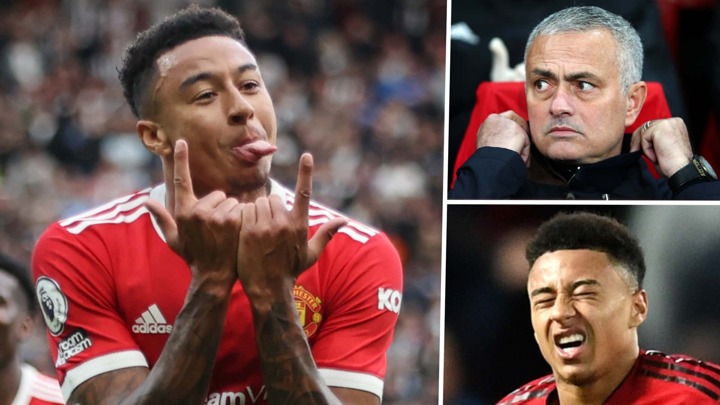 There was a time when the 28-year-old hit rock bottom, with even a positive working relationship with Jose Mourinho unable to prevent him from asking questions of whether he would ever rediscover a spark.

A loan spell at West Ham in 2020-21 helped bring the best out of Lingard and he is now able to look back positively on the experiences that have earned him favour with Ole Gunnar Solskjaer, Gareth Southgate and Bruno Fernandes.

Lingard had enjoyed a breakthrough campaign at Old Trafford immediately prior to Mourinho’s arrival in 2016 and would be a regular under the Portuguese before niggling injuries started to set in.

He has told The Players’ Tribune of working with one of the most charismatic coaches in world football: “Me and Jose had a good relationship generally, though, I have to say. He was good to me. Before all the injury stuff, he trusted me, put me in for important games. We won trophies and he made me a winner. He could just bring out that side in you.

“He also liked to have a personal connection with his players. Sometimes I’d look at my phone and I’d be getting a random FaceTime from him. Just out of nowhere — just to check in.

“I found it funny. And, to be fair, it showed how much he cared about us. But in terms of injuries, yeah, it was tough, because he didn’t want to hear it.”

Lingard suffered groin, hamstring and knee problems during 2018 and 2019, forcing him onto the treatment table at regular intervals and preventing impressive progress from being maintained.

As he fell down pecking orders with club and country the talented midfielder began to wonder whether it was all worth it, saying of that period in his career: “I couldn’t get back to where I had been. I was struggling mentally as well as physically. There was the off-field stuff with my mum and her battle with depression. I’ve talked about it before, and that isn’t what this story is about — but that affected me, too. It’s my mum, you know?

“Not playing only made things worse. But when I finally did play, even when I was fit again … I wasn’t me. My family kept coming to games, but they couldn’t even watch me. They were like, ‘This ain’t you. This ain’t your aura’. Games were passing me by like I wasn't there. Like a ghost.

“I even remember Bruno Fernandes coming to me before a game and saying, ‘Today I want to see the Jesse Lingard that I know’. All I could think was, ‘Mate, I can’t, ’cause this is not me!’

“I love football. Love it to death. But there were times when I thought, ‘I just can’t do this anymore’.

Lingard eventually secured a loan switch to West Ham in January 2021 and registered nine goals and four assists for the Hammers through 16 appearances to bring belief back to his game.

He has taken in six outings at United this season, and as many for England, with those that never lost faith in him delighted to see a bubbly personality enjoying his football again and proving any doubters wrong.

Lingard said of his revival: “Bruno Fernandes referred to me as the ‘best player in the Premier League’ in an interview with United … me!! Can you believe that?!? That’s coming from Bruno!

“I’ve got a lot of love for Bruno. He was dropping me messages of support throughout my loan. To get that recognition from someone at his level was just amazing.

“I wasn’t overachieving, though. What you saw at West Ham was the player I can be when everything is coming together. Let’s say it was an upgraded version of the old Jesse Lingard. Jesse 2.0.

“When I came back to United, I felt like a different person. I’m more mature, more confident. I’m taking more responsibility. To be fair, I’ve got to credit David Moyes and the West Ham lads for that. Cheers for everything, boys.

“I’ve been so excited about this season. It might sound like a funny thing to say when you’ve been at a club all your life, but I have really wanted to show people what I can do, you know what I mean?”