Not so long ago, you would have been forgiven for thinking today's Manchester derby could go some way to deciding whether the title would end up in the blue or red half of the city. 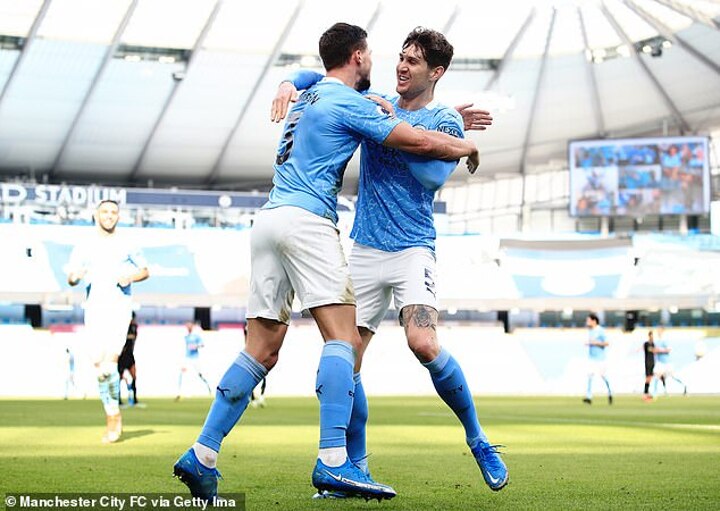 But when talk of a title bid really hit home for United, Ole Gunnar Solskjaer's side started to stumble and have not quite managed to get back up on their feet, while City have not looked back.

Pep Guardiola's side are looking to break even more records amid their ridiculous 21-match winning streak in all competitions, and the finishing line is firmly in their sights. 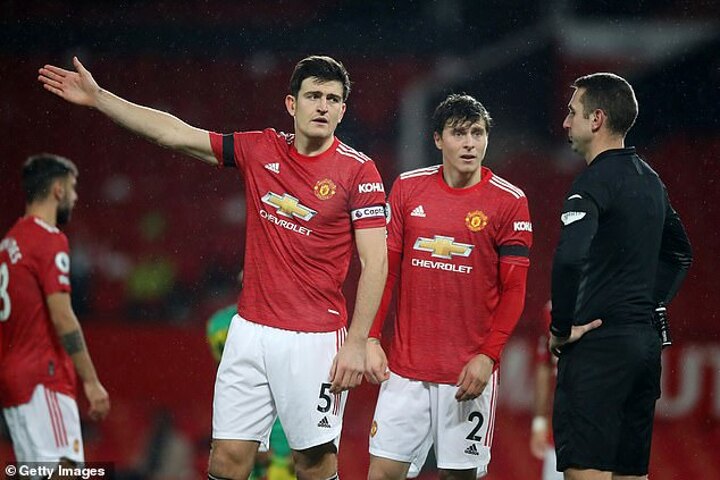 Following yet another setback for United on Thursday at Crystal Palace, City find themselves a massive 14 points clear with just 11 matches remaining, and are on course to capture their third Premier League crown in four years.

But while their free-flowing attacking football is winning plenty of plaudits, and rightly so, their renewed defensive fortitude has been just as integral.

And they have £64million signing Ruben Dias and his centre-back partner John Stones, who has enjoyed an incredible renaissance, to thank.

The pair, who both scored in last weekend's 2-1 win at home to West Ham, have provided the backbone for City's march to the title but across the city, United's defensive fortunes are very different.

Yes, goals have dried up in recent matches, but throughout the season both Harry Maguire and Victor Lindelof as a pair have not convinced, and the side have dropped far too many points due to a lack of authority at the back.

United legend and former right back Gary Neville has previously admitted his concerns over the central defensive partnership, insisting they cannot play together.

'I think he (Lindelof) is a really good player by the way, he understands the game, he reads the game, I think he is a good defender. I think if he was alongside a (Rio) Ferdinand or Van Dijk, I think he would make a great pair.

'The problem is he is alongside somebody who isn't the most mobile in Harry Maguire, and I think that is the problem that Lindelof has got. That actually they have invested £80m in Maguire, so they are going to have to put somebody beside him.

'They have got to have the nerve to make the stomach churn a little bit, that there is a bit too much space in behind them than there ordinarily would be and that is what the best teams have.' 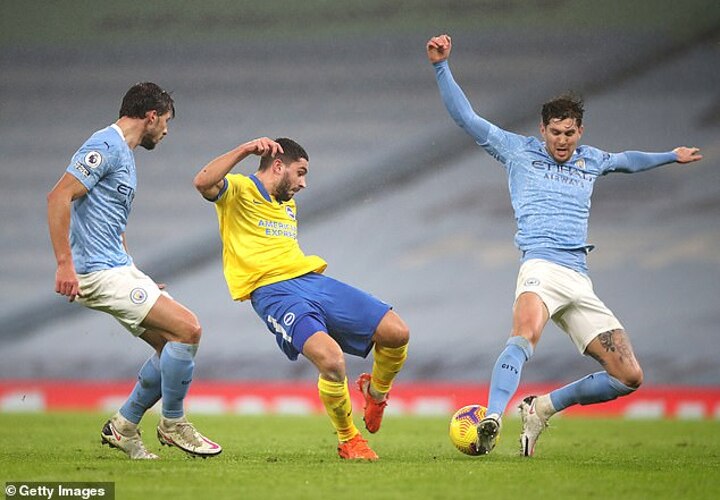 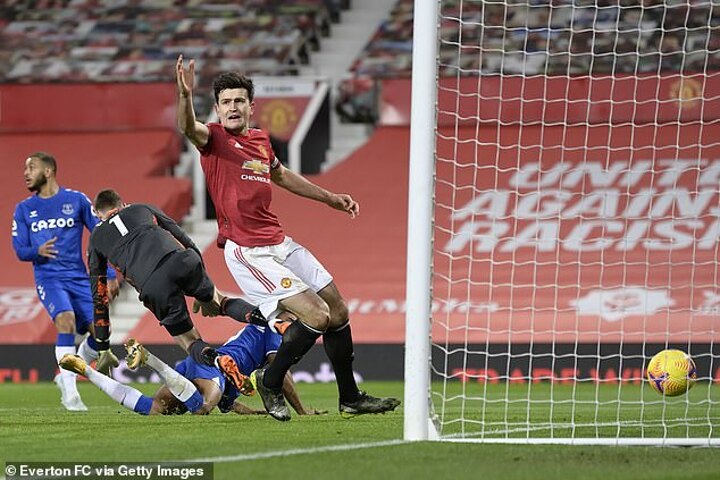 It's a far cry from the glory days when Rio Ferdinand teamed up alongside Nemanja Vidic in the heart of the defence, or going even further back when Steve Bruce played next to Gary Pallister.

And when you compare United's centre back duo to Sunday's counterparts the difference is there for all to see.

City are miles ahead of every other team defensively this season, it must be said, but you don't win titles without a formidable spine at the back.

Since Dias and Stones partnered each other for the first time this season, City have won 13 and drawn one of their 14 matches.

They have incredibly conceded just three times in that spell at a rate of only 0.2 goals per match.

The unlikely coming together has clearly helped reinvigorate City. Guardiola's side, with an array of talent at their disposal with Ilkay Gundogan, Raheem Sterling, Kevin De Bruyne and Riyad Mahrez all shining this term just to name a few, have full trust in their defensive duo that they can purely focus on the attacking aspect of things.

But this isn't the case for United, who flatter to deceive with Maguire and Lindelof at the back. In their 20 Premier League matches together this term, United have won just 10 times and their eight draws stand out with a points average of 1.9.

The Red Devils have conceded 22 times with Lindelof and Maguire in central defence - shipping in goals at an average of 1.1 times per match. 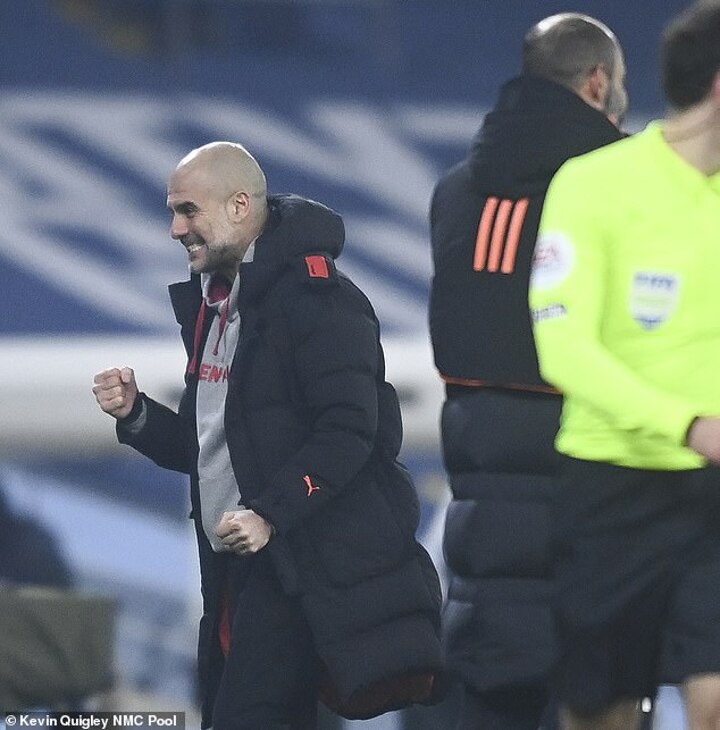 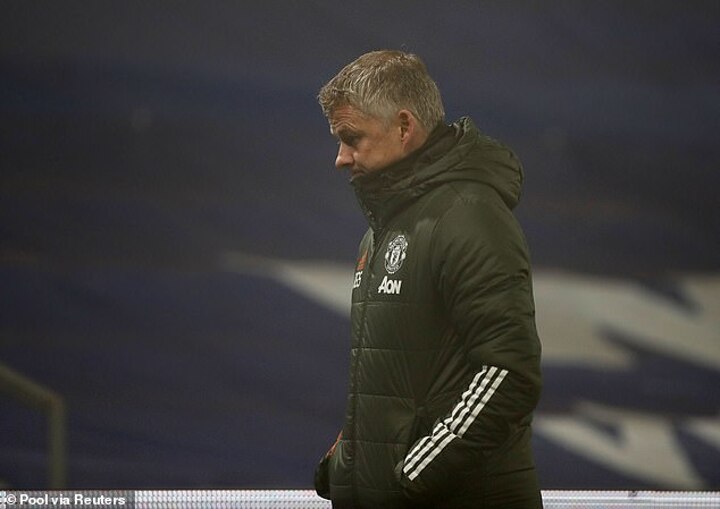 Mistakes continue to creep into their game, and opposition teams are there to punish them when they switch off. And that was evident against both Everton and West Brom recently.

Against Everton, after edging 3-2 in front after initially letting a two-goal lead slip, they had just seconds to see out the victory at Old Trafford. But from a Toffees free-kick in injury-time, United deployed a deep backline in their own box (echoing Neville's comments), before playing Dominic Calvert-Lewin onside, who had the easy task of tapping home.

And away at West Brom, Lindelof was far too easily out-muscled as Mbaye Diagne headed the hosts in front at the Hawthorns. The pair are vulnerable and opponents know they can be got at.

The United duo are also conceding 11.1 shots each fixture, which is four more exactly compared to Dias and Stones.

If the Old Trafford outfit have hopes of winning the title anytime soon, regardless of how good their attack is, it is very unlikely they would do so with Maguire teaming up with Lindelof.

City are putting their defensive counterparts to shame, but while we can continue to talk about United, Guardiola's backline are in fact embarrassing everyone this term.

And throughout the 2020-21 campaign so far, City have conceded just 17 times in 27 matches. Chelsea boast the second best defensive record but that is still eight goals worse off while Arsenal, Tottenham and Aston Villa are two further back.

In fact, if City keep up their emphatic resilience, they will take their place among the most successful defences in Premier League history.

City currently sit joint-second with Arsenal (1998-99) in terms of least goals conceded in a Premier League season, with only Chelsea's 2004-05 title winning team letting in less with 15 overall.

Yes there is still 11 matches to go for City, but if they can somehow only concede four goals or fewer until the end of the season, they will stake their claim as the joint-second best defensive side in the Premier League era.

Following a slow start to the season, which saw the club fall eight points off top spot in November after losing 2-0 at Tottenham, City have not looked back and have demolished everyone in their wake.

In years gone by, it has largely been City's front line that has powered them to the title, and while their attacking talents are delivering once again this season, Dias and Stones will be widely recognised for laying the foundations.

The City juggernaut is showing no signs of slowing down and come Sunday afternoon, it would be hard to look past another Guardiola victory.