Only at Manchester United could the news that arguably the club's greatest-ever player leaving with immediate effect be gazumped just a few hours later by the 'for sale' signs going up at Old Trafford. 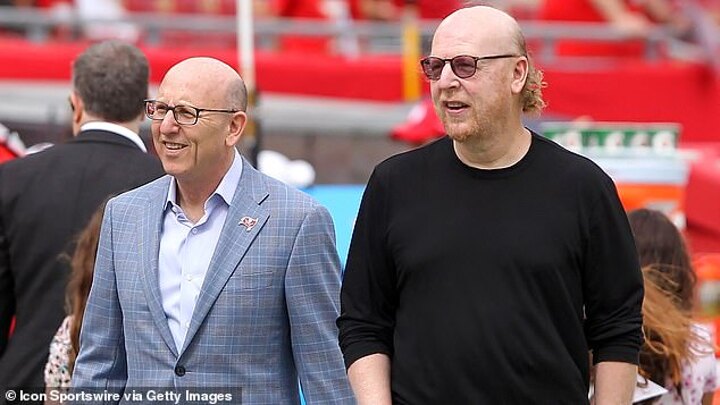 Even by United's standards, Tuesday evening was quite spectacular. At 5.30pm, the club issued a statement confirming that Cristiano Ronaldo had left by mutual consent in the wake of his TV interview with Piers Morgan.

At 9.30pm, another statement from United revealed that the Glazer family are exploring 'strategic alternatives' and may be ready to sell up after 17 years in power. 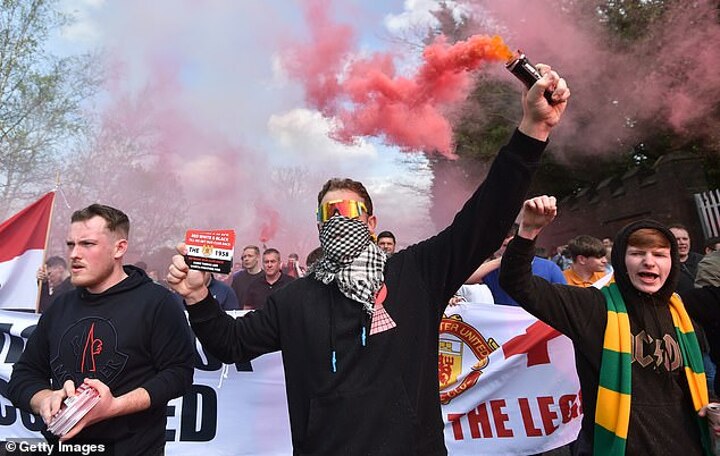 Seasoned observers of United are used to big stories breaking at any time, but this was something else.

If the Glazers follow Ronaldo out of the Old Trafford exit, which now seems to be increasingly likely, what will they leave behind?

There is little doubt the vast majority of United's fanbase around the world would be delighted to see the back of them.

The American owners started out on the wrong foot with their leveraged £790million takeover of United in 2005, and didn't do a whole lot right after that in the eyes of supporters.

Trying to defend them is a rather thankless task in these parts, even when it's pointed out that they have outspent most of their rivals with well over £1billion paid out for players over the last 17 years.

No, the Glazers are toxic and nothing would ever change that at United. The takeover, the debt, the dividends, the state of the stadium and the lack of success mean there never will be any way back. 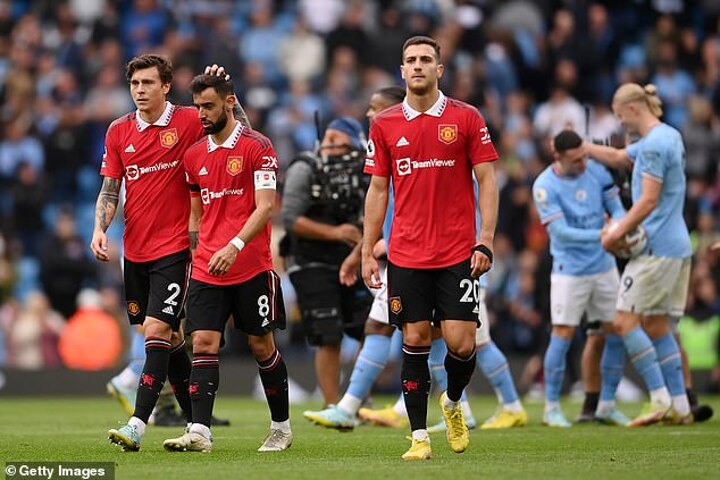 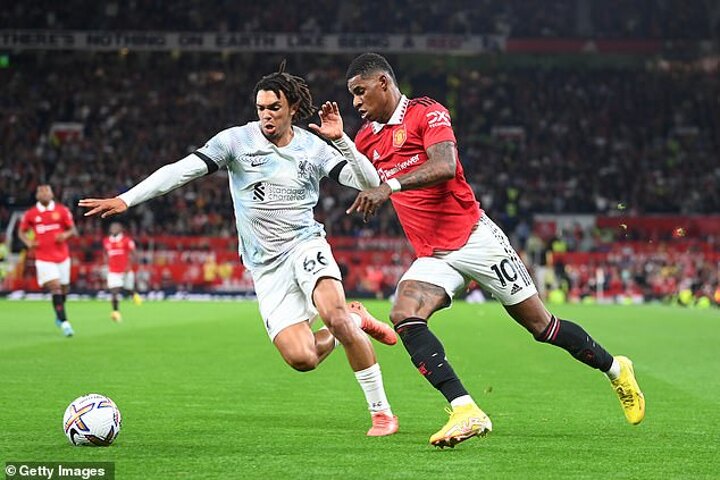 Anti-Glazer sentiment has reached unprecedented levels since the collapse of the European Super League in April last year with demonstrations inside and outside Old Trafford, even when the team are winning.

Songs about cutting up chairman Joel Glazer 'from head to toe' are commonplace.

None of which bothers the owners, of course. They're too far away to notice or care. It isn't their homes being menaced by protesters who managed to seek out executive vice-chairman Ed Woodward and his successor Richard Arnold.

For the Glazers, it will always be about money. If they sell United, it's because they want to, not because they are being forced to.

The £4.25billion sale of Chelsea and a rather pessimistic economic climate in the UK has suddenly made selling up sound like a very good idea. United's owners, like the Fenway Sports Group at Liverpool, have been tempted to test the market. 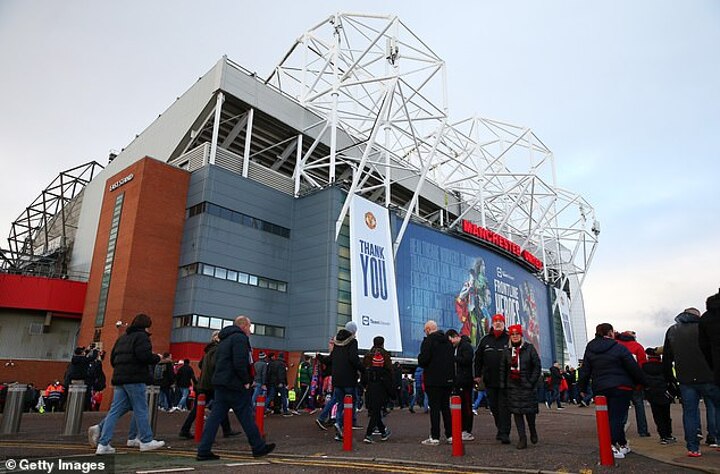 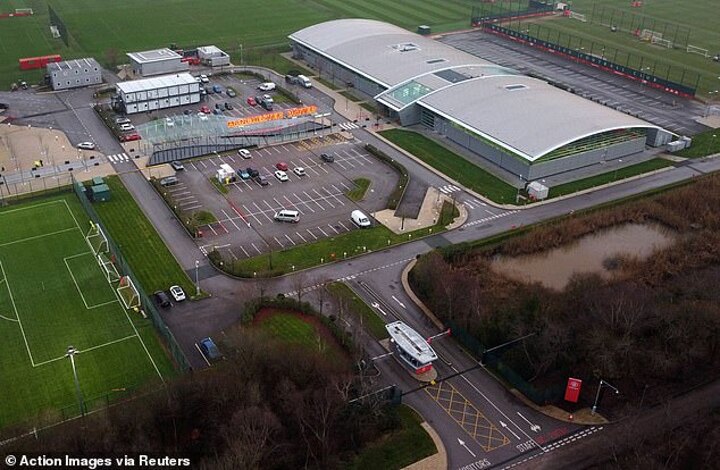 No-one at Old Trafford would be sad to see them go and that is the starting point for any new owners.

Just about anyone would be seen as an improvement on the current regime as long as they are prepared to make United debt-free and inject the kind of money needed to take the club back to the top.

Old Trafford, a cathedral of English football, is in dire need of a facelift.

United have appointed master planners to assess the feasibility of improving the current stadium, knocking it down and starting again, or moving elsewhere.

The suspicion is that the Glazers would favour the cheaper first option, but there will be no easy solution.

United's Carrington training base, once lauded by Sir Alex Ferguson as best in class, has now fallen behind others in the Premier League. It isn't just the dodgy tiles in the swimming pool, mentioned by Ronaldo, that need sorting out. 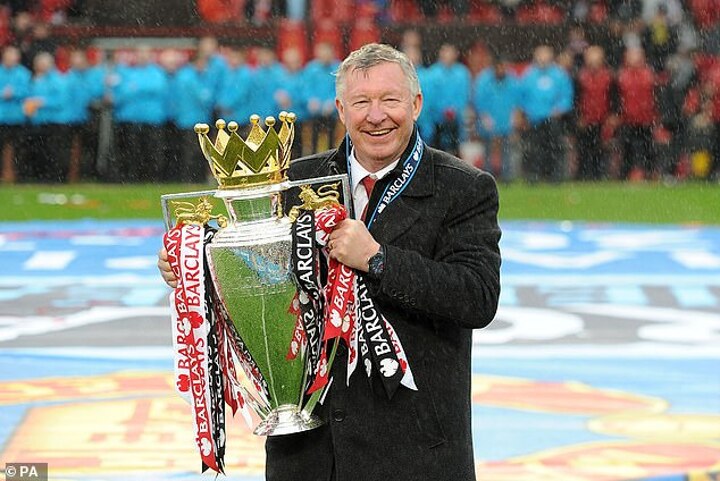 Millions more needs to be spent on upgrading Carrington, and plans that have been drawn up include the possibility of a club hotel on site for the players.

On the pitch, United are actually in the best shape they have been for some time. In Erik ten Hag, the club have appointed a progressive new manager who has already made a significant impact.

A lot of dead wood was cleared out in the summer and it's fair to say that all the new signings made by Ten Hag – Lisandro Martinez, Christian Eriksen, Casemiro, Antony and Tyrell Malacia – have improved the team.

Arguably, the only thing holding United back has been the circus surrounding Ronaldo, and that left town on Tuesday night.

One area where the new owners must learn from the Glazers' mistakes is building a better relationship with fans. 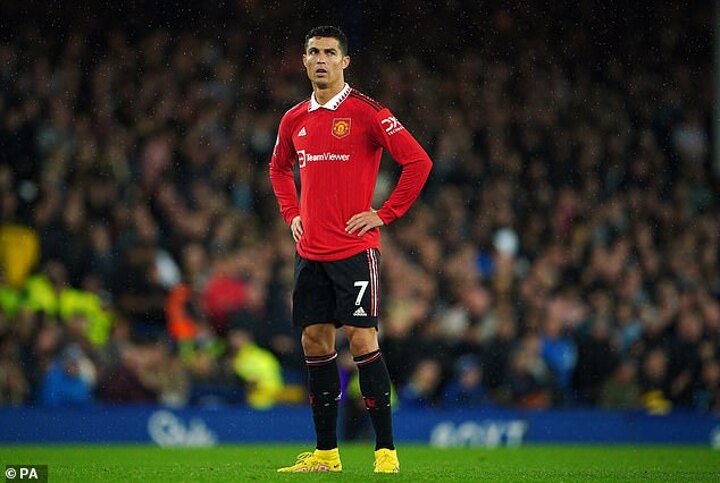 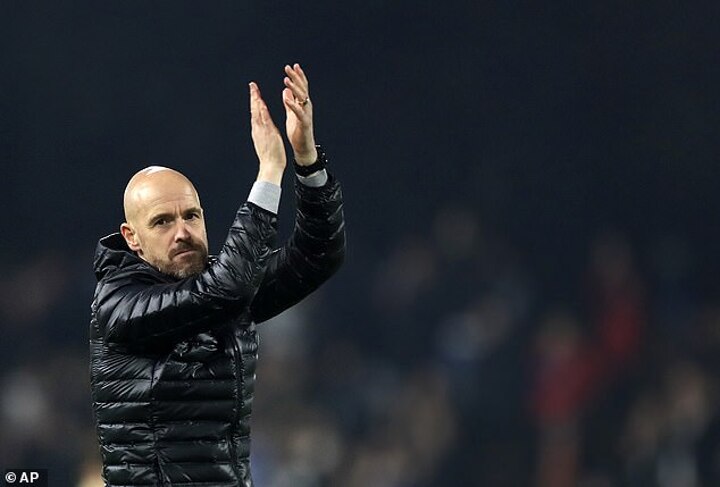 Joel Glazer realised that too late in the wake of the ESL debacle. Setting up a fans' advisory board and promising a fan share scheme were sticking plasters that were never going to heal the deep wounds.

The Americans became a rather shadowy lot, entrenched in Florida and Washington DC and rarely seen at Old Trafford. The new owners need to be open, visible and accessible. In this day and age, that really isn't too much to ask.

They need to give the fans more say in the running of their club. They need to show that it's not just about the money.

As and when any takeover happens – and it's not certain that it will – the bar has been set woefully low. Any new owners of United will have a head-start for one simple reason – they're not the Glazers.

Manchester United co-owner Avram Glazer has broken his silence after putting the club up for sale.

The 62-year-old spoke of finding 'strategic alternatives' for the club and also thanked the departing Cristiano Ronaldo for all he has done for the club.

He was confronted in the street by a Sky News reporter in Palm Beach, Florida, after Tuesday's shock announcement that the Glazers were inviting fresh investment at United and were potentially open to a sale.

They value the Old Trafford club at upwards of £5billion and there is expected to be plenty of interest in buying one of the biggest names in world football.

Asked why now was the right time, an awkward-looking Glazer replied: 'As we announced yesterday, the board went through a process and it has decided it is going to look at different strategic alternatives and that's what we're doing.' 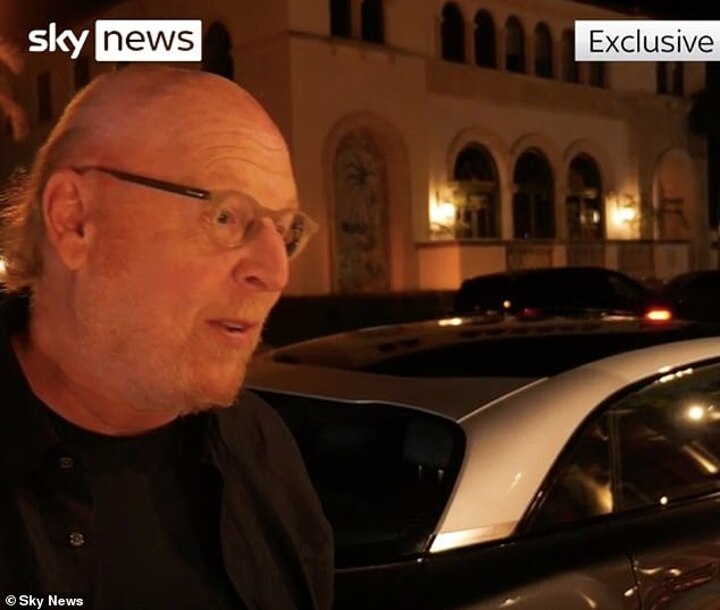 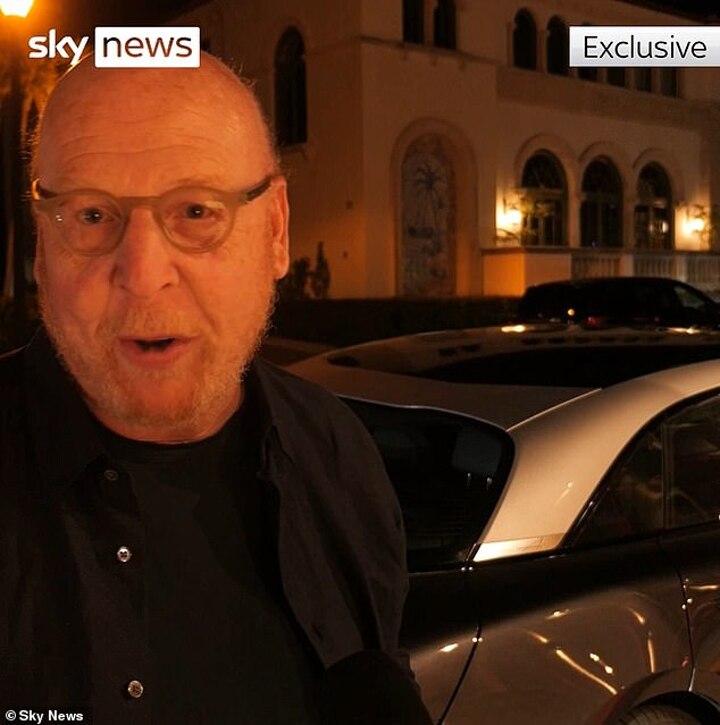 When it was put to Glazer that most United fans feel his family should have sold the club years ago, he answered: 'Once again, we are going through a process, we will look at all different strategic alternatives and we will see where it leads us.

'I appreciate you talking to me tonight and I'm going to wish everyone a happy Thanksgiving.'

Asked about the acrimonious departure of Ronaldo, Glazer said: 'I will tell you about Cristiano Ronaldo, he is a great Manchester United player and I appreciate everything he has done for the club and I wish him the best of luck in the future.'

It was announced in a 333-word statement late on Tuesday night that the Glazers, who have owned United since 2005, are willing to invite outside investment or even sell completely.

The statement said the club's board 'is commencing a process to explore strategic alternatives for the club…. To enhance the club's future growth.' 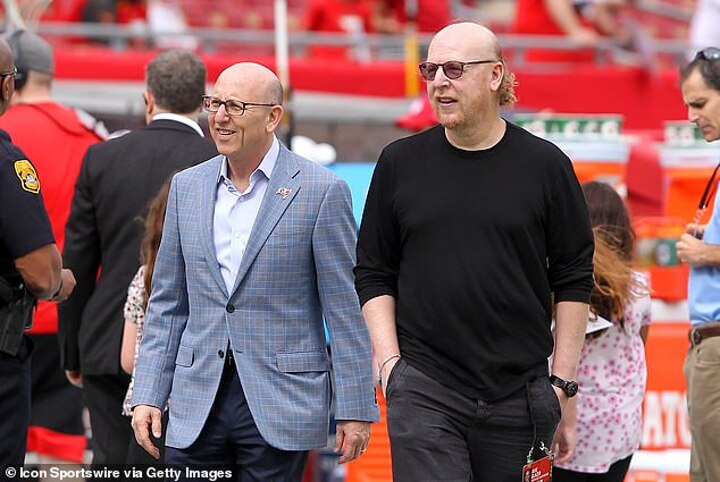 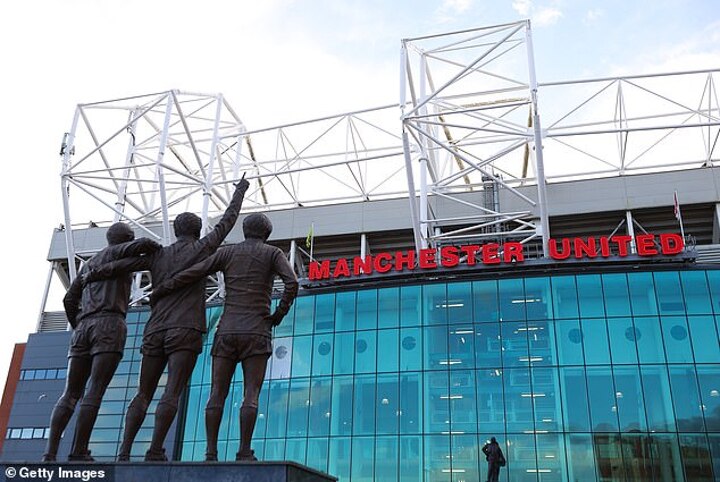 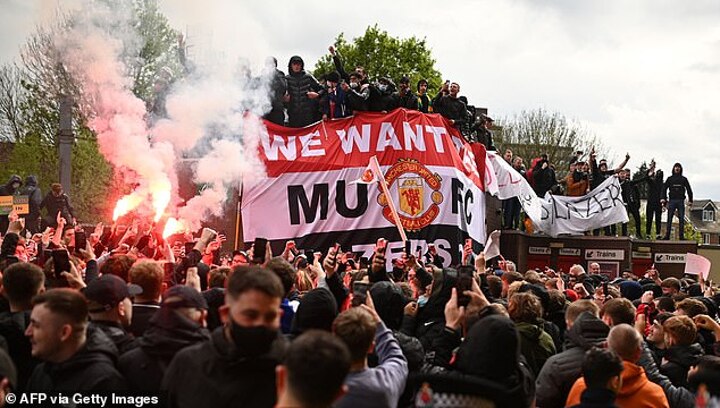 The next paragraph explicitly says the Glazers would consider all options, including 'new investment into the club, a sale, or other transactions.'

The statement also outlined that Raine Group, the New York-based merchant bank, have been appointed as United's 'exclusive financial advisor.'

Fans who have protested against the Glazers regime with increasing ferocity in recent months reacted with delight at the news though any sale process will likely be a slow one. 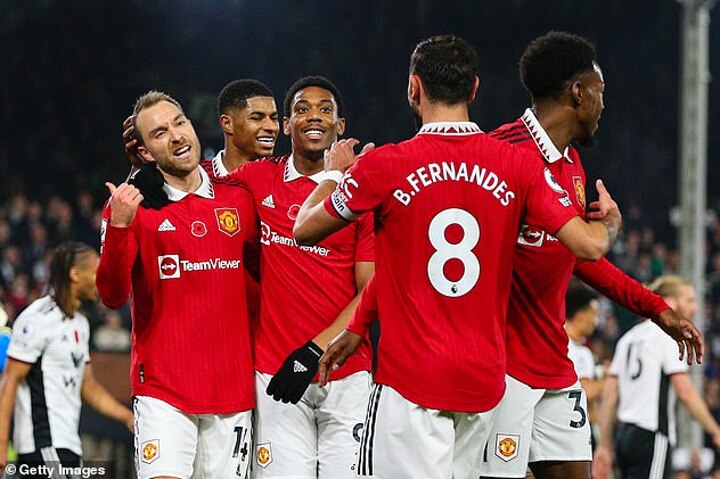 Ronaldo, 37, was highly critical of the Glazer family during his explosive interview with Piers Morgan - comments which led to his departure from United on Tuesday.

He said: 'The Glazers, they don't care about the cub. I mean, professional sport, as you know, Manchester is a marketing club.

'They will get money from the marketing - the sport, it's, they don't really care, in my opinion. 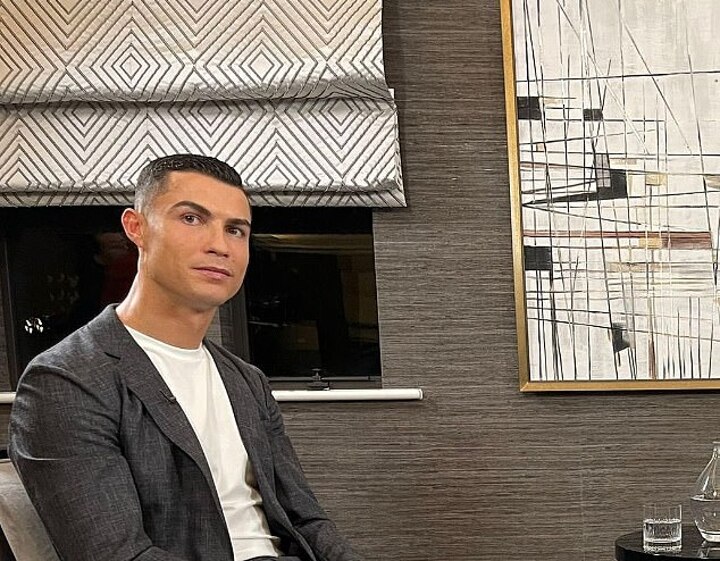 'The fans, they're always right. I think the fans should know the truth, should know that the players want the best for the club.

'I want the best for the club. This why I came to Manchester United.'

Glazer clearly saw no need to further antagonise the situation, instead praising Ronaldo for his contribution to United over two spells.

It came as reports suggested United legend David Beckham was open to holding talks with any potential buyers of United.

Though Beckham cannot afford his old club by himself, he could form part of an investment consortium to purchase them. 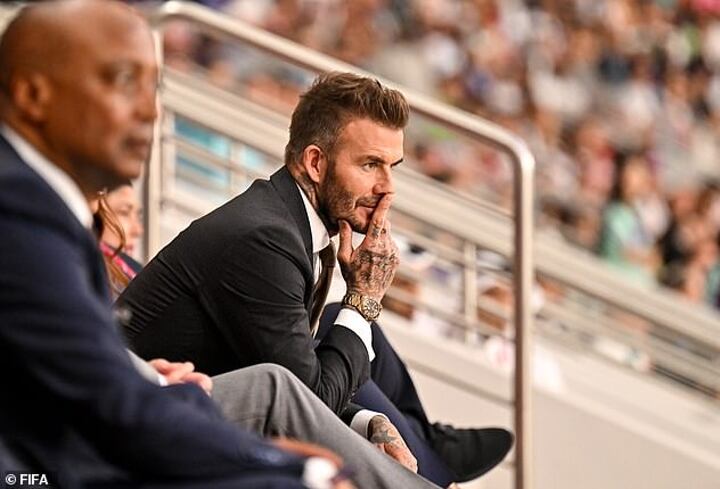 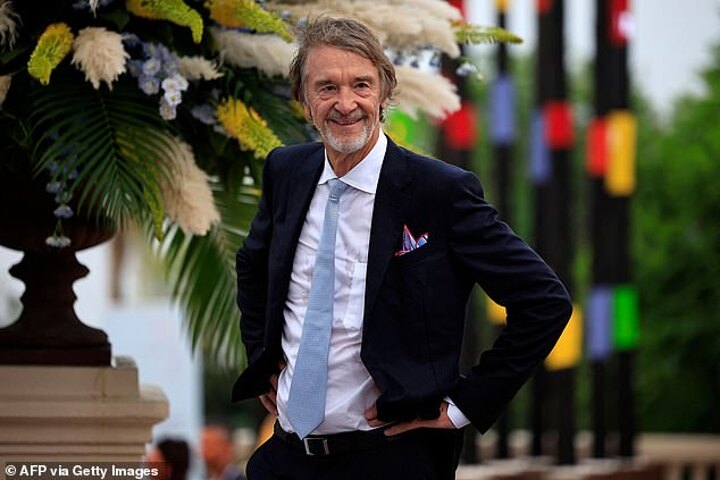 Other reports have said billionaire Sir Jim Ratcliffe, the wealthiest man in the UK, will launch a bid to buy out the Glazers.

The United fan was one of the first to express an interest in buying the club when talk of a sale arose in the summer and he was unsuccessful with a late offer to buy Chelsea.