Newcastle supporters will travel to St James' Park on Sunday full of optimism that a brighter future awaits under their new Saudi-backed owners, following the departure of Mike Ashley. 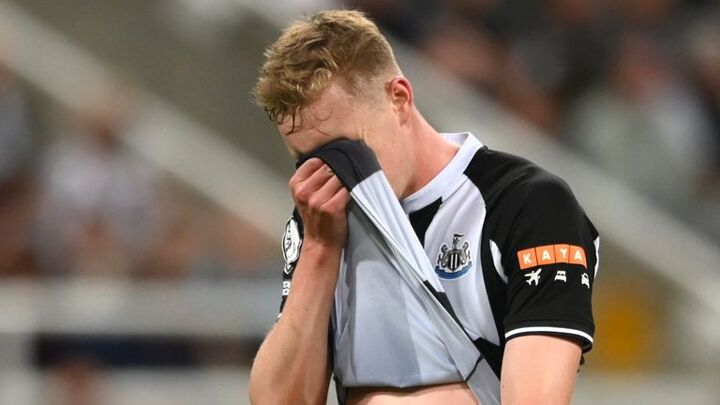 However, whatever the outcome against Tottenham in the curtain-raiser to the new era, one thing is certain: it will take time, investment and a lot of hard work to move Newcastle up the Premier League table and into a position to compete with the best sides in the country.

Here, Sky Sports statistician Sven Alexis takes a look at the numbers around Newcastle's current situation to reveal the work that needs to be done on the pitch to take the team to the next level...

A familiar, slow start to the season

Unfortunately for the Geordie faithful, a slow start has been a common theme in recent seasons. Newcastle have failed to win any of their opening seven games in four of their last seven Premier League campaigns.

It remains to be seen what uplift the takeover will have on this squad - and what impact any new arrivals in January will have - but Newcastle, once again, are already playing catch-up.

In fact, only Southampton have conceded more Premier League goals than Newcastle since Steve Bruce's appointment in July 2019. They have also faced the most shots per game of any Premier League side.

Bruce has at times been criticised for the style of football his Newcastle teams have played but it certainly hasn't led to good defensive numbers.

Since mid-December, Newcastle have conceded 62 goals in 34 league games, the most conceded by any Premier League side in the last 10 months.

This season, while Newcastle rank around mid-table for their attacking output, their defensive stats are among the worst - if not the worst - in the division. 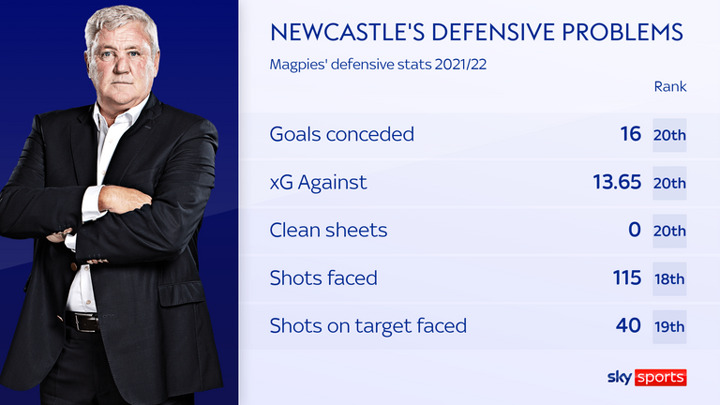 One thing that has gone against Bruce in the last year is the lack of starts that Allan Saint-Maximin and Callum Wilson have had together. They have both been in the starting line-up in only 13 of Newcastle's 45 Premier League games since the start of last season.

When you include sub appearances, they have both featured in 20 Premier League games together, with Newcastle winning 40 per cent of those games. However Newcastle's win rate drops to 16 per cent when one or both are missing. 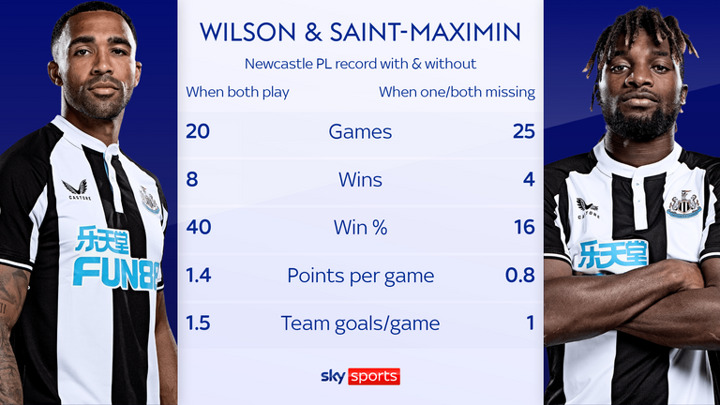 Not only was he Newcastle's top scorer last season with 12 Premier League goals, he also recorded the most assists (5).

The importance of Saint-Maximin playing is also evident with the fact that Newcastle have not won any of the last 12 games the Frenchman has missed in all competitions.

Saint-Maximin or Wilson have been involved in six of Newcastle's eight Premier League goals scored this season, with the winger recording two goals and three assists, and the striker notching two goals.

Bruce was the last of eight permanent managers during the 14 years of Ashley's tenure and it is clear that to improve the club's fortunes from their current position won't be an easy task.

Their overall win percentage and points per game have also dropped significantly during his ownership.

Their struggles to kick on have been going on for some time.

The Magpies have won only three of their last 16 PL home games and a worrying statistic is that St James' Park has not seen back-to-back PL home wins since December 2019. They've also kept just two clean sheets in their last 26 PL home games.

Interestingly Steve Bruce won exactly the same number of points as Rafa Benitez did in each of their two full Premier League seasons at the club. Bruce's side scored three more goals but conceded 25 more goals when compared to Benitez. 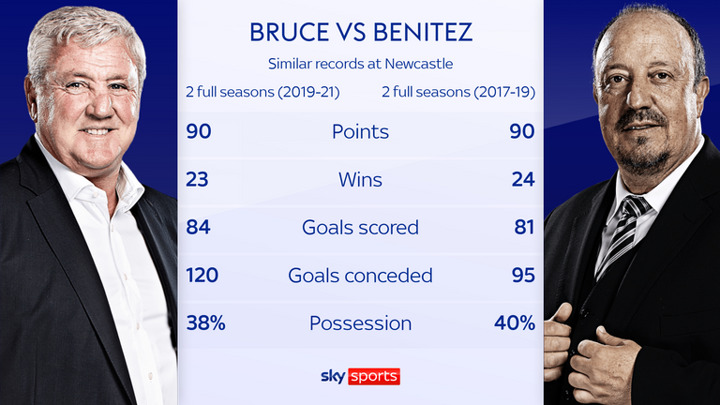 That suggests it is going to take a major shake-up to get the club moving in the right direction again - and you can see what Newcastle fans hope will be the first step towards that when they host Tottenham, live on Sky Sports on Sunday.