The FIFA 20 Ultimate Team ratings are now starting to come through, after the top 100 players were revealed earlier this week, with the full FUT20 ratings of the entire Manchester United squad now available. 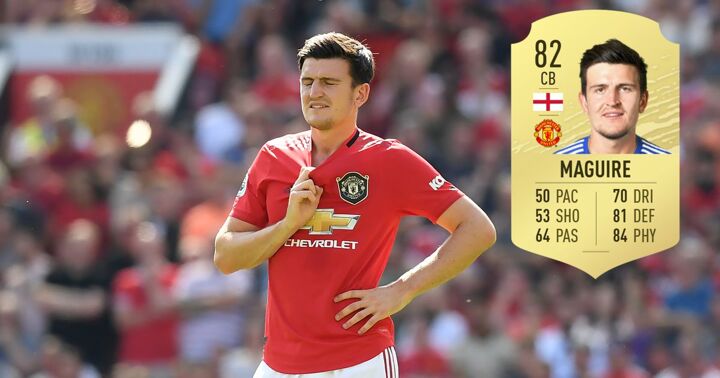 There were some really interesting changes to the United squad ahead of FIFA 20, including upgrades to Marcus Rashford, Scott McTominay, Aaron Wan-Bissaka and Daniel James.

However, the likes of David De Gea, Anthony Martial, Phil Jones and Nemanja Matic have all had significant downgrades to their ratings.

One of the most interesting stories to come from the FIFA 20 ratings was the overall rating given to United's summer signing Harry Maguire, who wasn't upgraded at all, and retains his 82 overall rating that he had at Leicester City.

This means that his defending attribute isn't very impressive, at just 81 out of 100, and lags behind the world's best, and some of the not so good too.

Here are the players with a higher defensive attribute than Harry Maguire on FIFA 20 Ultimate Team.

Incredibly, Arsenal defender David Luiz, who has developed a reputation for making horrendous defensive mistakes, actually has a higher defensive rating than Maguire.

The Brazilian also has a higher overall rating, with higher pace, shooting, passing and dribbling.

Arsenal's other central defender also has a higher defensive rating than Maguire, with Sokratis rated at 84 overall, which is a whole two points higher than United's new signing.

His pace and defending his higher than Maguire, but the English defender is higher in every other attribute.

Even Maguire's defensive partner Victor Lindelof has a higher defensive rating, as well as better passing, pace and dribbling.

Although, Maguire does have a higher overall rating.

Despite making a number of high-profile defensive errors over the past 12 months, City defender John Stones has a much better defensive rating than Maguire on FIFA 20, and has a higher overall rating.

A player who developed a reputation for being unable to defend in his time at Manchester City, Kolarov still has a higher defensive rating than United's Maguire. Incredible.

Coates has been a strong performer in recent seasons for Sporting, but it's easy to forget that the Uruguayan had an extremely poor spell in England with both Liverpool and Sunderland earlier in his career, being part of the Black Cats side who conceded goals left, right and centre.

Despite this, the Sporting defender has a higher defensive attribute than Maguire on FIFA 20.