When Patrick Vieira was appointed as Crystal Palace boss in the summer of 2021, he became just the tenth Black manager in the 29-year history of the Premier League. 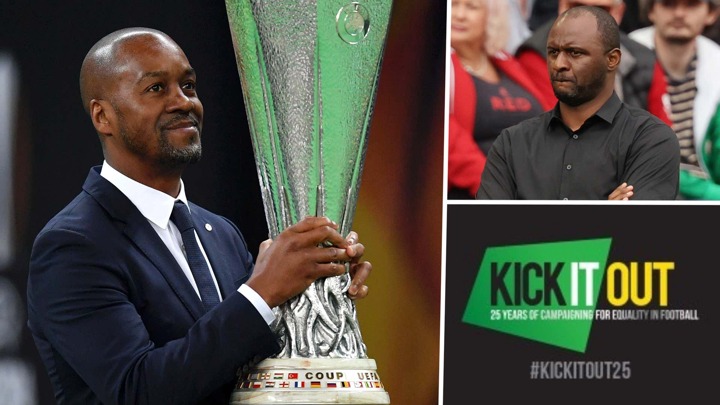 Vieira is one of just eight head coaches of colour currently in charge of one of the 92 clubs in England's top four divisions, as the fight for more inclusivity within the game goes on.

Players taking the knee before games is as much about highlighting the need for more diversity among decision-makers in football - whether that is at executive or coaching level - as it is about the racial abuse they suffer on an almost-daily basis.

Progress, though, continues to be slow, with individuals like ex-Chelsea coach Eddie Newton tired of empty gestures without clear action being taken.

"You know what stops me (getting a manager's job)," Newton, who took his first steps into managment with Trabzonspor in Turkey having grown frustated at the lack of opportunities he was afforded in England, tells Goal .

"There’s some managers who just go from one job to another and keep failing. They still get the next job and you ask, 'is that success?'. It seems like the same old faces just keep going around the system. Society is different now and you need to move in a different direction with fresh blood.

"All the talking and adverts have been done on anti-racism, it becomes a token gesture. You want action now. There’s still not enough being done on the field. That’s my main obstacle, but it is not the same in Turkey, I must say that.

"It is more about football politics here, but it isn’t an issue of race in Turkey. I’ve been at the top, I won the Champions League (as a coach), FA Cups as a player, and there’s Black coaches coming through the system who haven’t done all that.

"So if I am struggling, what must that coach who’s maybe played at a lower level be thinking?"

A winger for Chelsea during the 1990s, Newton's playing career was ended at the age of 28 due to persistent knee injuries, and he soon pivoted into working towards a coaching career.

After spells at MK Dons and West Brom, he returned to Stamford Bridge in 2012 as assistant manager to Roberto Di Matteo, and was part of the coaching staff that led the club to its first Champions League title later that year.

After Di Matteo left, Newton was placed in chage of formalising Chelsea's now world-famous loan programme, before returning to the bench as part of the coaching staff under both Guus Hiddink and Frank Lampard.

Newton eventually left the west London outfit early in 2020 before taking up a coaching role at Trabzonspor, where he won the Turkish Cup after stepping up to become manager in the final weeks of the campaign.

And though he was sacked from that role early in the 2020-21 season, he believes he has proven his credentials enough to earn further opportunities in the dugout.

"I want to keep managing. I know I have the skill and ability to do it, without being big-headed. I know how to get a team to function in different systems, prepare them physically and mentally for games and through a season," he explains.

"I know how to build a coaching staff, have a philosophy, build a culture. Football clubs need cultures so people hold onto and believe in something. I know I can build that if I have a club willing to go in that direction.

"I have vast experience at the top level and lower down, as well as European experience, so why wouldn’t you take me?

"I have won medals as a player and a coach. I feel I should have opportunities and should get the chance to take the next job."

Goal put Newton's comments to English football's equality and inclusion organisation, Kick It Out, who admitted that more needs to be done to helps those in his position.

"The representation of Black and Asian communities in professional coaching is definitely not where it should be," Tony Burnett, Kick It Out CEO, told Goal .

"These are communities that actively participate in football at grassroots, and there are lots of Black players at the top of the game, but we need to look at improved pathways and opportunities provided for Black and Asian talent to coach at the highest level.

"Our Raise Your Game programme helps young people wanting to break into football with the mentoring and leadership opportunities that help them thrive, whether that’s in coaching or any other part of the industry.

"But there is so much work that needs to be done in this area. We’d like clubs to commit to ambitious diversity targets for coaching positions. The FA’s Football Leadership Diversity Code is aiming to address this, but we would like to see more clubs to sign up to it.

"Black and Asian coaches could also be fast-tracked to their professional license, to increase the number of candidates from underrepresented communities."

For now, though, it is a sad indictment on the English game that Newton's best chance of earning another shot at management is abroad, with the 49-year-old still living between Istanbul and London as he awaits his next opportunity.

It is clear, however, how much of an impact the Turkish game has left on him.

"One thing I want everyone to know is I loved being at Trabzon. The fans were unbelievable," he concludes.

"I am talking about it now and the hairs on my arms are raising. Looking at the fans on the coach, wherever I go in Turkey I am stopped by Trabzon fans. It is like the Newcastle of Turkey! Everything in Newcastle is about the team, that’s Trabzon.

"Unfortunately, the side I was then working with was dismantled. We lost five or six senior players. The president didn’t have real control over the transfers coming in and the players weren’t good enough coming in, I thought.

"I did my best with those players and tried to develop some young players, but it was very difficult and at week seven, he sacked me. Unfortunately, we couldn’t build on what we started.

"We were expected to build something again from nothing. It was a difficult baptism of fire in management, but you learn."