The Teranga Lions are the first team to have confirmed their place in the playoff round after extending their 100-percent record to four matches with two further victories in Group H. 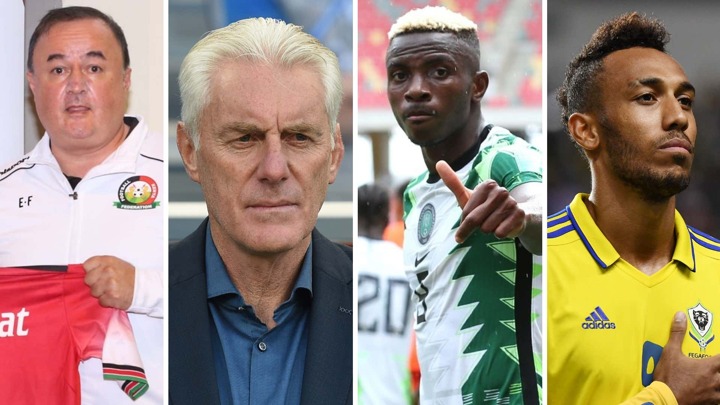 They struck seven across their two matches with Namibia, eliminating the Brave Warriors—and all the other teams in the group—in the process, to roar into the Second Round.

Famara Diedhiou was the standout performer of the international break for Senegal, netting in the 4-1 victory in Thies before striking a hat-trick in the ‘away’ game in Johannesburg.

It’s perhaps a bit harsh to call Nigeria ‘losers’, after all, they remain in pole position in their group and have qualification in their own hands.

However, major questions have to be asked of the players and the set-up after they were defeated at home by the Central African Republic on Matchday Three.

They may have won the return fixture between the two sides in ‘neutral’ Douala, but that loss in Lagos will have stung—it was their first in 39 qualifiers, stretching all the way back to 2004.

The second team into the next round, Morocco have made light work of a group that contained a few potential banana skin when it was drawn out.

Obviously, they’ve been helped by Sudan and Guinea’s implosions, but 14 goals scored and one conceded across four matches is the kind of return that should get opponents sitting up and taking notice.

They scored 12 across this international break, and appear to be doing just fine without Hakim Ziyech.

Kenya didn’t actually start the qualifying campaign too badly, with a pair of draws, but things have subsequently unravelled spectacularly to the point where they are officially out of the running to make the tournament.

The appointment of Firat Engin on a two-month contract was bizarre from the off—and it certainly hasn’t worked, with Kenya humiliated in a 5-0 defeat by Mali.

The loss of Victor Wanyama, who announced his international retirement after being overlooked, also underpinned a miserable few weeks.

Parted ways with Hossam El-Badry after the last international break, and are clearly enjoying life under his successor Carlos Queiroz.

The ex-Iran boss registered two wins out of two over the last week, including home-and-away triumphs against Libya.

Even without Mohamed Salah among the goals, the Pharaohs have taken firm control of Group F.

By contrast, Pierre-Emerick Aubameyang’s hopes of reaching a maiden World Cup with Gabon appear to be all but extinguished.

The Panthers currently have four points from four games, and need Egypt to lose both matches if they are to unseat them from top spot.

Aubameyang struck a vital goal to send Gabon on their way to victory in Franceville over Angola, but the Panthers will definitely regret losing away in Luanda in the first meeting between the pair.

Also under new management, Bafana Bafana weren’t quite as stylish as Egypt this international break, but they nonetheless picked up maximum points from Ethiopia home and away.

The Johannesburg bout may have been stuttering, but they were excellent in Bahir Dar to pick up a 3-1 triumph away from home.