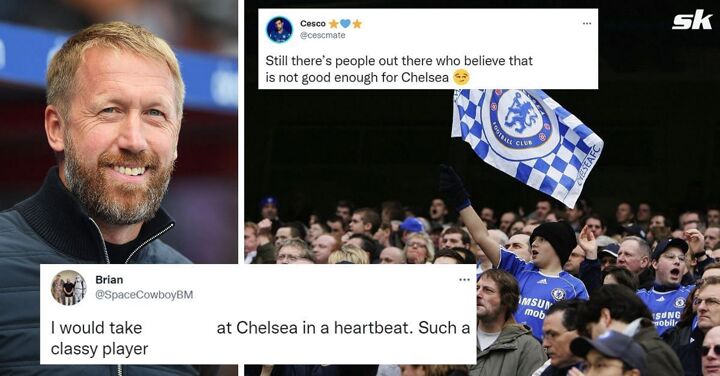 The Blues watched their side come back to beat Crystal Palace 2-1 in their Premier League clash on Saturday. However, it was the Belgian who has won the hearts of the Stamford Bridge faithful following his display against Liverpool.

He scored a hat-trick at Anfield to help the Seagulls play out a 3-3 draw. It is the first hat-trick from an opponent at Anfield since Andrey Arshavin's hat-trick over a decade ago.

Taking to Twitter to voice their opinions, the supporters called on the Chelsea hierarchy to make a move for Trossard. Here is a selection of their tweets:

Trossard was instrumental in Brighton's 3-3 draw against Liverpool, where he scored a hat-trick to keep the Seagulls in the game. His first goal came in the fourth minute with a deft touch to take out Trent Alexander-Arnold before placing his shot into the right-bottom corner.

He scored again only 14 minutes later to double their lead, with the forward getting into the right place at the right time to receive the pass.

However, Roberto Firmino was on form for the Reds, as he scored two goals to level the scoreline. Brighton seemed set to lose the game after Adam Webster scored an own goal to put Liverpool ahead, but Trossard wasn't done with his display.

Putting a sword to the Liverpool defense yet again, the Belgian impressively snuck into the far post to receive a low cross. He unleashed a powerful shot that Alisson could not keep out, putting the Seagulls at par with their hosts.

This eventually saw them finish with one point in a game they might have lost without Trossard's input. Brighton remain fourth in the Premier League table, while Liverpool dropped to ninth.

Unlucky for Crystal Palace, they did not have Leandro Trossard to keep Chelsea from taking home all three points on Saturday. The Eagles scored first at Selhurst Park. Odsonne Edouard sneaked in between the defenders to power a shot past Kepa Arrizabalaga and into the top corner.

Chelsea soon equalized, thanks to an impressive strike from new signing Pierre-Emerick Aubameyang. A header from Thiago Silva into the box found the former Barcelona man. The Gabonese striker took a quick turn before firing a powerful shot into the bottom corner to level the scoreline.

Palace's former loanee Conor Gallagher then blasted the ball into the top corner to secure three points in stoppage time. The youngster's astonishing effort caused heartbreak for the Eagles, who will feel like they deserved to take home a point against Chelsea on the day.