Barcelona manager Xavi Hernandez has given an honest assessment about Frenkie de Jong's situation, with Manchester United reportedly interested in the midfielder. 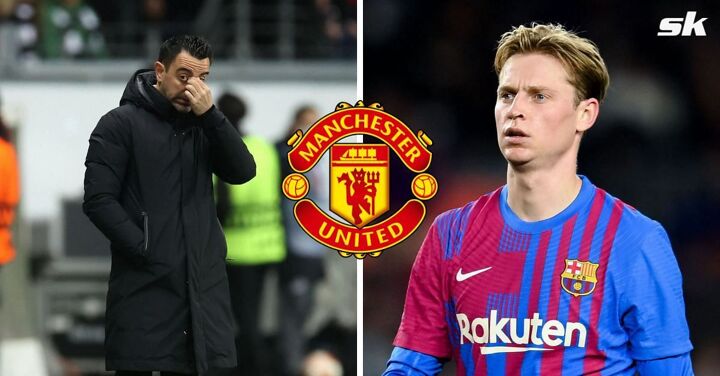 De Jong, 25, has been at the Blaugrana since 2019, joining from Eredivisie side Ajax for £77.4 million. Many anticipated the Dutch midfielder to be part of Xavi's Barcelona for years to come. However, recent reports suggest that United are looking to bring De Jong to Old Trafford, with the player's former Ajax manager Erik ten Hag set to take charge next season.

Gerard Romero (via BarcaUniversal) has claimed that a deal for the midfielder to become a Red Devil is 95% done. Barcelona have financial issues that stem all the way back to the departure of Lionel Messi last summer. The Argentinian left, as the club couldn't offer him a new deal without falling foul of La Liga's financial fairplay regulations.

Now Xavi has admitted that the current financial situation at the Camp Nou could have an impact on De Jong's future. He has seemingly opened the door on the player's potential United move. Xavi said (as per BarcaUniversal):

“He’s an important player for me, and he started every game except for a few due to rotations. But it depends on the economic situation. For me, Frenkie could be one of the club legends.”

De Jong has made 138 appearances for the Blaugrana, scoring 13 goals and contributing 17 assists. This season, the midfielder has managed four goals and five assists in 45 appearances across competitions. The fee being touted to lure De Jong to Old Trafford is £68 million.

Manchester United's interest in the 25-year-old De Jong makes perfect sense. His former manager is going to be taking the reins at Old Trafford this summer. The two had success at Ajax, winning the Eredivisie as well as making the UEFA Champions League semifinals (2019).

Two of United's top midfielders - Paul Pogba and Nemanja Matic - are set to leave the club this summer. So De Jong could be the perfect player to come into the Red Devils midfield.

He has composure on the ball, can pick a pass and has quick feet. He would almost certainly need protection, but if he works his magic, he could flourish at Old Trafford.

However, Barcelona is a difficult club to leave, given their pedigree. Does De Jong really want to join a club that have suffered a disappointing season, where they have failed to show any fight?

The Red Devils have exited all cup competitions and will finish outside the Premier League top four. That is perhaps one major aspect De Jong will have to ponder about joining United, who are far from the Premier League elite at the moment.