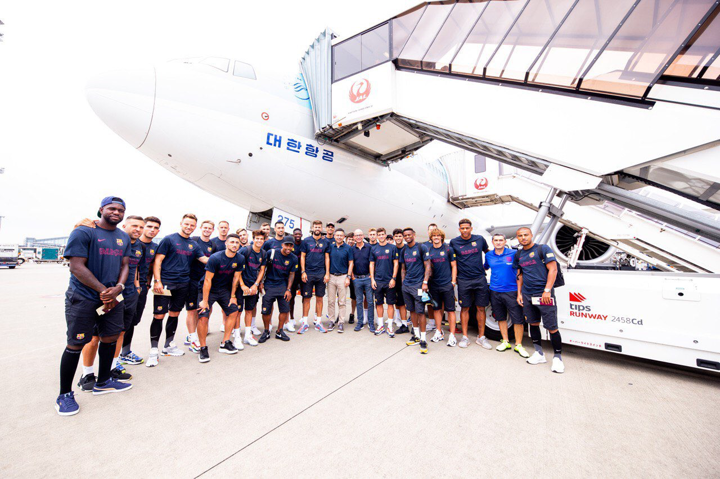 Between July 20 and 28, the first team will visit the cities of Tokyo and Kobe, where it will play in the ‘Rakuten Cup supported by Scalp-D’, with games against Chelsea FC and Vissel Kobe. Also, for the first time on a pre-season tour, they will be accompanied by the Barça rugby team.

15:50: Departure of the FC Barcelona expedition on flight KE9912 to Tokyo

16:30: Welcome reception hosted by Rakuten for FC Barcelona at Ana Intercontinental Hotel in Tokyo, to be attended by FC Barcelona President Josep Maria Bartomeu, and members of the Board of Directors

10.30: FutbolNet Festival for Social Inclusion organized by the Barça Foundation and Konami at the Tachikawa Tachihi Arena, Tokyo to be attended by FC Barcelona first vice-president Jordi Cardoner and Barça ambassador Juliano Belletti

18.00: Reception with the Barcelona Japan Fan Club at the Hotel Hyatt Regency Tokyo, with Josep Maria Bartomeu, FC Barcelona President, and members of the Board of Directors

15.40: Visit by Rugby Team to NCCHD Hospital in Tokyo with Jordi Cardoner, FC Barcelona first vice-president, and Oriol Tomàs, Board member, to attend

16:30: Opening of the Fan Zone at Saitama Stadium with Board Member Pau Vilanova and from 17:30, Barça ambassador Juliano Belletti to attend

14.51: Arrival in Kobe and transfer to Hotel Kobe Portopí

19.30: Rakuten reception for FC Barcelona and Vissel Kobe, attended by Josep Maria Bartomeu, FC Barcelona President, and members of the Board of Directors

14.00: Joint training between Barça Rugby with Kobelco Steelers at Kashiwahama Ground, with Board member Oriol Tomàs in attendance

17.00: First team press conference at Noevir Stadium featuring the coach and a player

15:00: Opening of the Fan Zone at Noevir Stadium Kobe and attendance of Barça ambassador Juliano Belletti from 16:00

*Training sessions indicated in programme will be partially open to the media. Any other sessions may take place behind closed doors