He remembers the confidence going into the game on Boxing Day second in the table with the chance to close the gap on the visiting leaders. And he remembers what happened next.

Liverpool beat Leicester 4-0. Their most complete performance of the season. Barnes hardly got a touch and was subbed before the hour.

All of a sudden the hope of another unlikely title challenge became a stark reality of Leicester's place in the pecking order. Back-to-back defeats to Manchester City and Liverpool.

'It was a real insight into the levels that you do need to hit to be at a top team and to be challenging for that title,' said Barnes.

'We went into that game very confident and thinking we could win. They turned up and showed us what you need to hit and what you need to do to win a title. They had that quality throughout the whole season.'

Leicester and Liverpool meet again this afternoon. Again, it's a top-of-the-table clash. Again, it's likely to define how serious Leicester's title challenge may be. A few things are different this time. It's at Anfield for a start. But also because it's Leicester who lead the pack after their best start to a top-flight season. Liverpool, a point behind, are third on goal difference. And, what's more, Leicester have already beaten Man City.

Barnes was only 18 when Leicester won the title. He had not yet made his senior debut but he remembers the buzz around the place. 'There was definitely an atmosphere that you could sense,' he said. He admits there have been some 'crazy results' this season too. From the outside, it has all the makings of another 'Leicester' season. But will it be them again?

The City win was a mark of their improvement. 'Not too many teams will go there and get the result that we did. The pleasing thing for us was the way we set up, we executed it perfectly. They didn't know how to deal with it.

'There have been times this season when we haven't played as well as we can but we have got results. End of last season, we weren't quite playing as well as we could have done but also results were going against us as well. That is something we have managed to knock out of our game a bit.'

And they have done it with a patched-up squad. For all the talk about Liverpool's injury woes, Leicester have reached the summit while suffering their own. Ricardo Pereira hasn't kicked a ball this season, while Jonny Evans, Caglar Soyuncu and Timothy Castagne have all been absent with injury. So has Wilfred Ndidi. So has Jamie Vardy. So has James Maddison.

'We've managed to deal with that really well,' said Barnes. 'It's been a credit to us that we've lost some key players out of the starting 11 and we've still managed to be where we are in the table and maintain that quality. For us there will be players coming back, so there will be competition for places. Hopefully that will just push us on.' 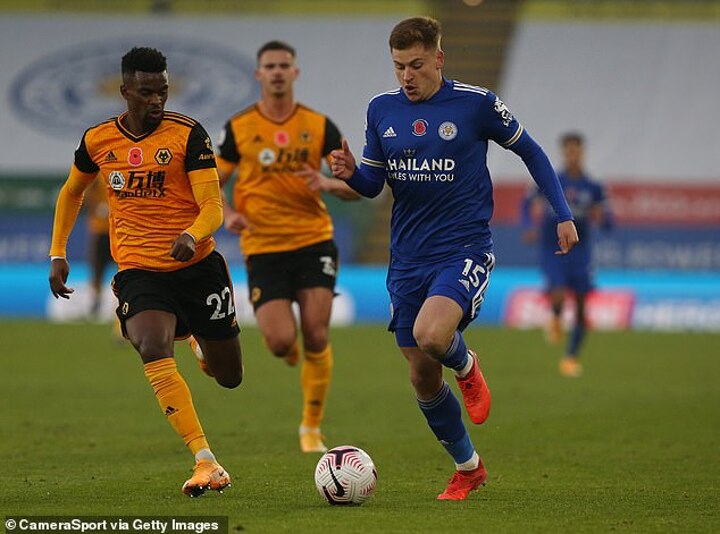 Barnes is relishing that competition. On the face if it, Barnes is a relaxed kind of lad. As the Leicester winger dropped into the other side of the Zoom screen, there was small talk about his international break and being left out of the England squad.

There was disappointment but no resentment. Barnes is laid-back about it. It just meant he could focus on Leicester. He could give Netflix a 'battering'. And, anyway, he'll just have to 'force the manager's arm' next time.

Behind it all, though, there's a resolve. 'He has an inner steel and aggression,' says Rodgers. 'When he gets angry, he's at his best. He's not naturally an aggressive boy, he has a lovely calm manner but hen he gets aggressive he is really hard to stop.

'It is funny, if you talk to Hamza Choudhury and those boys who played with him in the youth team, they all say that when Harvey got really angry, he would just be so electric on the pitch. I just have to find a way to make him angry.'

Rodgers continues to push Barnes to improve. He's got history of getting the best out of his wingers. It was under Rodgers at Liverpool that Raheem Sterling blossomed into a regular England international.

The message to Barnes, from Rodgers and to himself, is clear. 'You see the top players around you and they score goals. I'm trying to base my game on them and hit the levels that they are hitting. Raheem throughout the last few seasons, the goals he's been getting.' 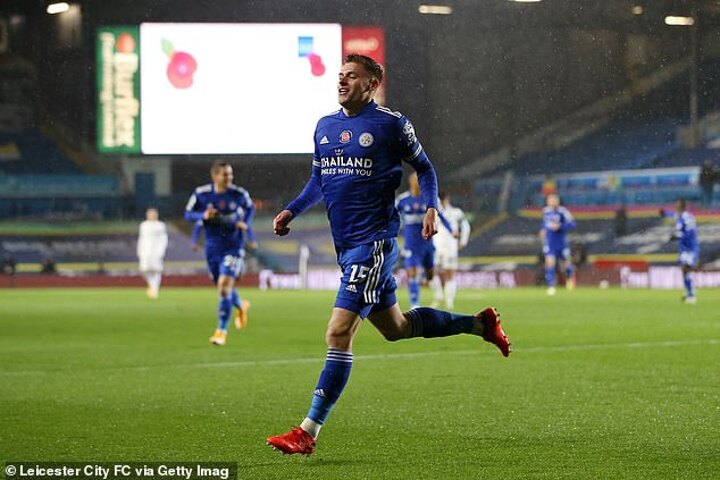 Barnes has two Premier League goals so far and another in the Europa League. He's had more shots and touches in the opposition box than Jamie Vardy. But he needs to be more clinical.

He's taken advice from Alan Shearer, who commented on Match of the Day last year that he should look up before he shoots. He's worked on that in training. He's picking up as much as he can from Vardy too. 'Being able to play with him and watch him is the best way to learn. He is one of the best at it and the perfect example to learn off and add those things he does so well in his game into mine.'

Leicester's opponents today are reaping the rewards of a long-term project under a one of the game's top coaches. Rodgers has made Leicester a top-six team in 20 months. Just how far can they go?

'As a squad we are still very young,' said Barnes. 'We still have a lot to learn. We have seen a lot of improvements under the gaffer. We know we have still got a lot to come. if we can keep the whole squad together, and progress with the manager then we are only going to get better and better.'