Arsenal defeated Crystal Palace 2-0 in the opening game of the Premier League on Friday, August 5. 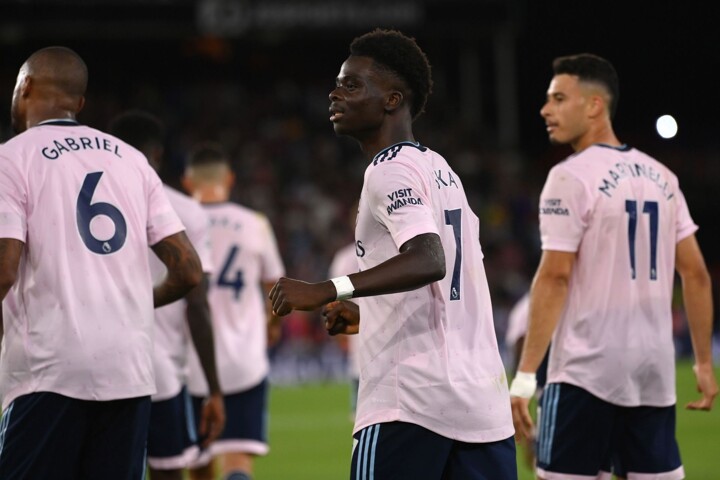 Selhurst Park hosted a curtain-raiser for the new season, a stadium where the Gunners have had mixed results in the past. Mikel Arteta fielded a full-strength lineup for this game, one which he used regularly during pre-season.

Palace, on the other hand, were without last season's star performer Conor Gallagher, who returned to Chelsea following the end of his loan deal. However, with several other talented youngsters at his disposal, Patrick Vieira fielded a strong lineup.

Arsenal began the first half on the front foot, playing with vigor and intensity. They barely allowed Palace any time on the ball, pressing in groups and creating overloads in key areas.

Gabriel Martinelli headed in the first goal of the new Premier League season from a well-worked Arsenal corner in the 20th minute. Oleksandr Zinchenko made a smart run to the far post to provide the assist for the Brazilian to make it 1-0.

Granit Xhaka received the first yellow card of the new season, having been booked by Anthony Taylor for simulation. The Gunners dropped off towards the end of the first half, allowing Crystal Palace a few half-chances. However, they held on to a narrow one-goal lead at the break.

Crystal Palace looked reinvigorated as they came out for the second half, creating a few early chances. Eberechi Eze came close after Wilfried Zaha played the ball into his path, but Aaron Ramsdale was equal to it.

The hosts continued to play in expansive fashion, trying to carve out an opening using their pace on the flanks. Martin Odegaard had a chance to double Arsenal's lead but tried to pass when he could have shot and lost the ball.

Arsenal stumbled on their way towards the dying embers of the game and had a stroke of luck in 85th minute. Bukayo Saka received the ball in a tight angle in the box. He attempted a powerful shot which was headed into his own goal by Palace captain Marc Guehi to make it 2-0.

Arsenal held on to secure all three points, starting the season in perfect fashion with a win and a clean sheet. That said, let's take a look at how the team performed.

Aaron Ramsdale made a slightly shaky start to the game as he was involved in a couple of nervy moments mid-way through the first half. However, he made some key stops to deny Palace the opportunity to score. He made two saves in the game and passed the ball with a 70% accuracy.

White did well to keep Palace's main threat Wilfried Zaha under check using his positioning and pace. He made eight tackles and four clearances to thwart the opposition. He won 12 of his 19 duels and was also booked in the second half.

Saliba put in another performance that made it seem as if he has been a part of this squad for a long time. He made seven clearances and blocked one shot. The Frenchman also won three of his four duels. Saliba was named man-of-the-match on his league debut for Arsenal.

Gabriel had a few nervy moments that put his side in danger of conceding. Most notable was when the ball hit his hand, but the referee and VAR deemed it unintentional. He won six of his nine duels, blocking two shots and making three clearances.

Zinchenko provided a sharp assist on his league debut for Arsenal, making it five assists in his last 11 appearances in the competition. He made three interceptions and five tackles in the game. The Ukrainian also won seven of his 14 duels. He was subbed off just after the 80-minute mark.

Xhaka was a key presence in Arsenal's midfield, adapting to an advanced role in the new-look side. However, he earned his side's first booking of the season for simulation. He won nine of his 11 duels and passed the ball with 85% accuracy.

The Ghanaian looked composed in midfield, using his physicality well to thwart Palace's advances. He won eight of his 14 duels and made seven successful tackles.

Saka appeared in multiple positions in the final third as the Gunners displayed their versatility and ability to change shape. He attempted three shots, one of which forced an own goal to make it 2-0.

Arsenal's new captain controlled the tempo of their play, playing key passes to bring his teammates into the game. He missed a golden opportunity to double his team's lead in the second half. He won three of his four duels and attempted two shots. He was replaced in second-half stoppage time.

Martinelli scored Arsenal's first goal of the new campaign as he headed in following a smart set-piece by the Gunners. He played three accurate long balls with 100% accuracy. He also won five of his 12 duels.

Jesus looked lively as he displayed his dynamism in attack. He dropped deep on several occasions to receive the ball and dribble forward himself. He completed six dribbles at a 100% success rate. The Brazilian also won 10 of his 21 duels.

The Scotsman came on in the 83rd minute and performed well. He won both of his ground duels, making two successful tackles in the process.

Nketiah came on late in the game and played well. He completed one successful dribble and won one of his two duels.

He arrived as a late-game substitute and did not play enough minutes to warrant a rating.