Chelsea's trio joined the team's foundation to surprise the children of Middlesex County during the workshops and soccer session organized by the 'Blues.' 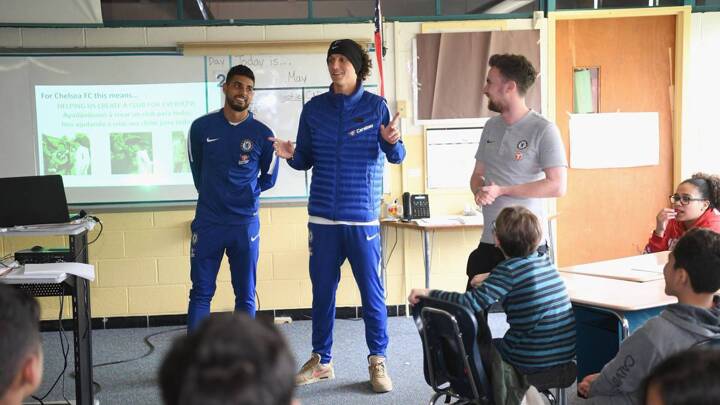 On Tuesday, David Luiz, Ruben Loftus-Cheek and Emerson combine with Chelsea Foundation coaches to surprise students during the workshop and football session at Middlesex County.

David Luiz and Emerson were huge hits with the kids, joining them in exercises, besides going to the classrooms to talk about the significance of diversity, equality, and inclusivity not only in sports but also in life.

'It doesn't matter where you come from, it depends on your heart,' were David Luiz words to the kids, mentioning he tried to treat them all the same way by speaking Portuguese, English or Spanish to make them feel comfortable.

Chelsea's Foundation has been doing a fantastic job outside the pitch, focusing on using sport to raise awareness and bring people together and with the help of Middlesex District Attorney, Marian Ryan, the event was able to happen.

Ryan explained why the workshop would have a significant impact saying; 'Middlesex County is a county that is diverse in every possible way, one out of every five people in our county of 1.6 million is born somewhere other than the United States. So it's particularly important for kids to be aware of diversity and equality. Schools are a great place to do that, and for kids, the best way to do that is around something like sports.'

The kids had a great time talking to the coaches, getting pictures with the players besides learning an important lesson in life.