East Bengal fans organised a peaceful protest against the club officials on Wednesday afternoon but it eventually turned violent as the local police had to resort to lath-charge to disperse the crowd. 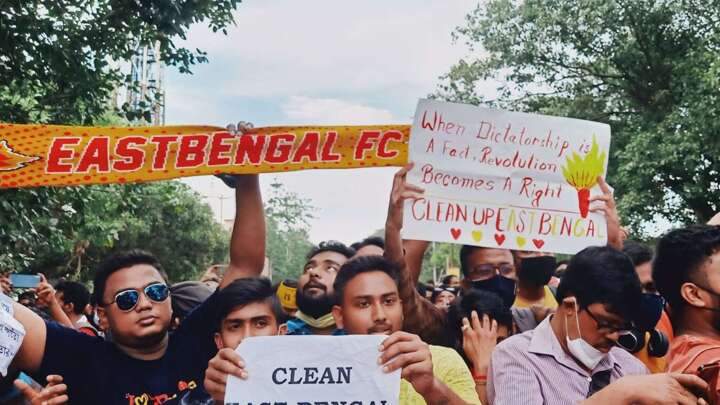 The protest was related to the ongoing tussle between East Bengal and their investor Shree Cement regarding signing the final agreement of a joint venture between the two parties.

Several Red and Golds fans had gathered near the club premise with banners and they raised slogans against the club officials in a peaceful manner demanding them to sign the final agreement.

But the peaceful protest suddenly turned violent and the police lath-charged to disperse the protesting crowd to maintain law and order. A couple of fans were injured while three or four fans were arrested as per police claims.

East Bengal senior Santosh Bhattacharya condemned the fan protest and said, "This was definitely not a good advert for the club. The people who are demanding we sign the agreement do not know the clauses of the final agreement. We cannot bring the final agreement to the public as it violates the understanding of the investors. This attack on the club is heartbreaking.

"Both the fans and us officials wish well for the club. We want them to send their representatives to the club so that they can look into the agreement. We cannot allow the club to go into private hands completely.

"Playing in the Indian Super League (ISL) ISL depends on the party who has the sporting rights of the club. Common ground can be reached through discussions but the investors do not want to meet us. They are constantly asking us to first sign and only then will they discuss the matter. ISL will start soon and they will not wait for East Bengal forever."

A senior official of the investors condemned the attack on the fans and suggested that the investors' stance is the same. If there is any difference between the final agreement and term sheet signed in September 2020, the officials must point that out in writing to them.

Describing the incident, a senior police officer said, "We patiently waited as two sets of fans protested. But after some time things went out of hand as the crowd turned mob so we had to charge and disperse them. No lathi-charge happened. Three or four people have been arrested and action will be taken against them."

After Quess Corp parted ways with East Bengal in June 2020 after being the club's investor for two seasons, Shree Cement came on board as their new investor which facilitated the club's move to the Indian Super League (ISL).

They then proceeded to establish a joint venture named Shree Cement East Bengal Foundation, in which the cement giants held 76 per cent stakes while the club had 24.

After Shree Cement's arrival, a term sheet was signed by both parties in September 2020 in the presence of West Bengal Chief Minister Mamata Banerjee who had played an important role in bringing the company on board as the club's new investor.

Based on the term sheet, the club’s sporting rights as well all its assets and properties (including intellectual) were reportedly transferred to the newly formed joint venture between the two parties.

Even though the term sheet has been signed, a final binding agreement of the deal is yet to be signed by the officials despite multiple reminders.

The club officials have remained firm on the claim that certain points in the final agreement are different from the term sheet that the parties had signed. The new management, on the other hand, claims otherwise.