Chelsea and Arsenal meet this Saturday evening in the FA Cup final at what will be an eerily empty Wembley. 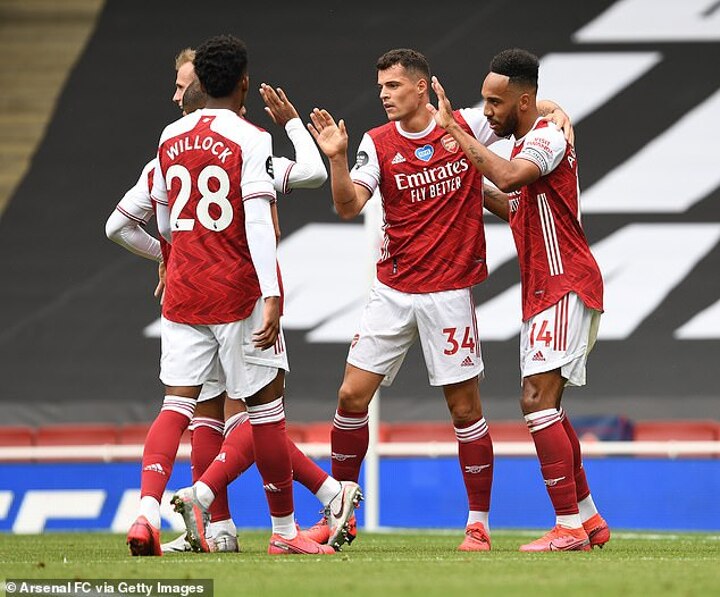 But while the supporters must stay away, it promises to be an entertaining contest with both Frank Lampard and Mikel Arteta desperate to win their first trophy in management.

This will be the fifth time the two clubs have met in a cup final this century and the third time in the FA Cup final.

We take a look back at the previous four encounters here. 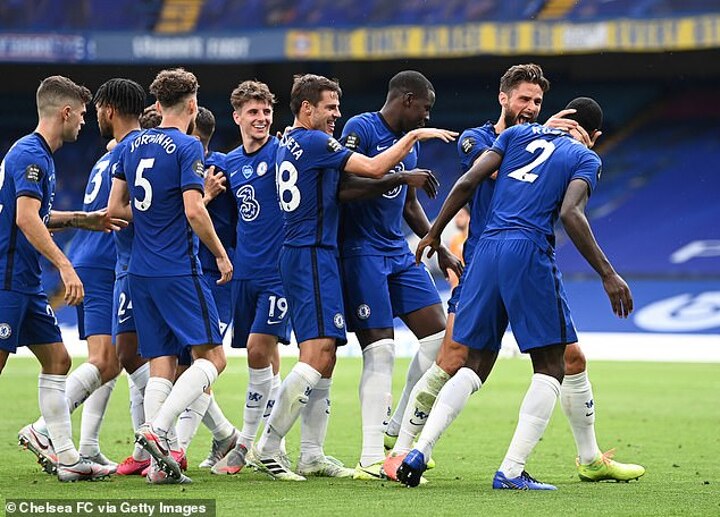 This was the season that Arsene Wenger's second great team at Highbury emerged from the shadow of Manchester United to achieve their own domestic dominance.

By the time of this final at Cardiff's Millennium Stadium, Arsenal hadn't lost domestically since December 18, building up ahead of steam that would see them win a second Double in five seasons.

This was actually the first leg of that success, the Cup final taking place on the strangely early date of May 4. Four days later, Wenger's side won 1-0 at Old Trafford to clinch the Premier League crown as well.

It was a classy Arsenal team - not quite as good as the Invincibles vintage that would come two years later, but nonetheless boasting Thierry Henry, Patrick Vieira, Sol Campbell and Dennis Bergkamp. 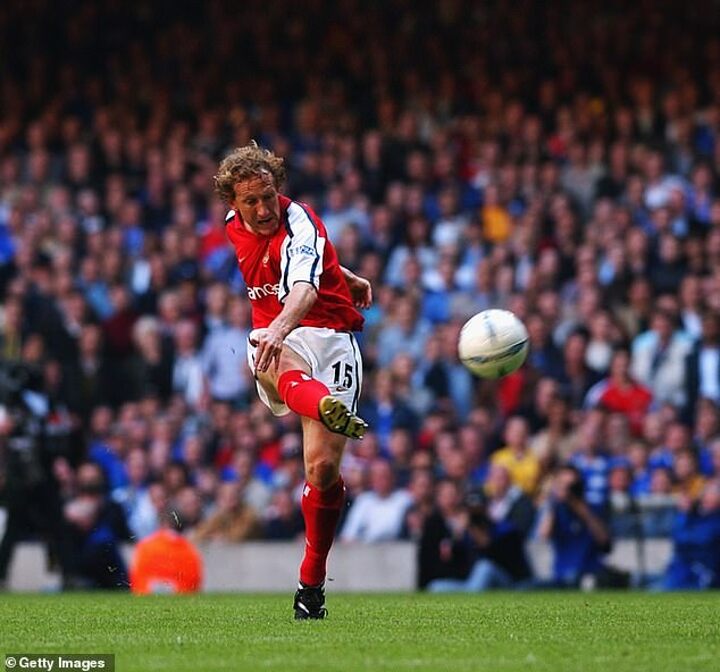 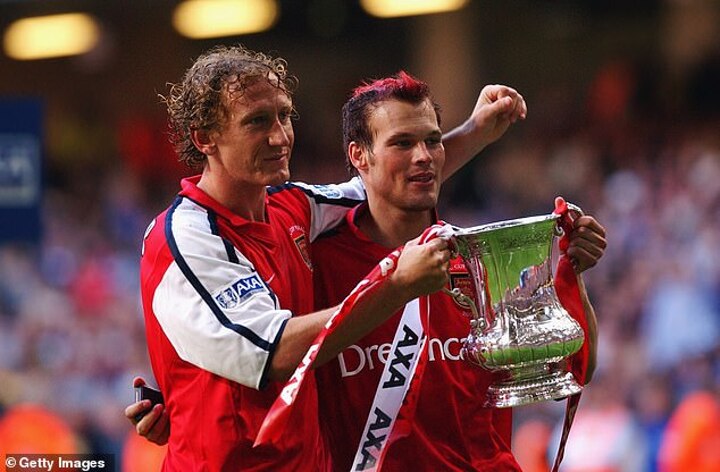 But for all those stand-out names, it was the unlikely figure of Ray Parlour who broke the deadlock in this final after 70 minutes of underwhelming stuff from both sides.

It was a dazzling goal from a workhorse of a player. Collecting the ball just inside the Chelsea half, the Soccer AM presenter and Chelsea fan, Tim Lovejoy, commentating on Sky's Fanzone coverage, famously said: 'It's all right, it's only Ray Parlour'.

Indeed, surrounded by blue shirts, the odds were stacked against him. With nobody to pass to, Parlour decided to shoot instead, curling a beauty into the top corner. 'I don't score many like that,' Parlour admitted.

Freddie Ljungberg made sure it was Arsenal's day seven minutes later, capping a mazy dribble with a similar curled finish that looked like it was going well wide until the last moment. 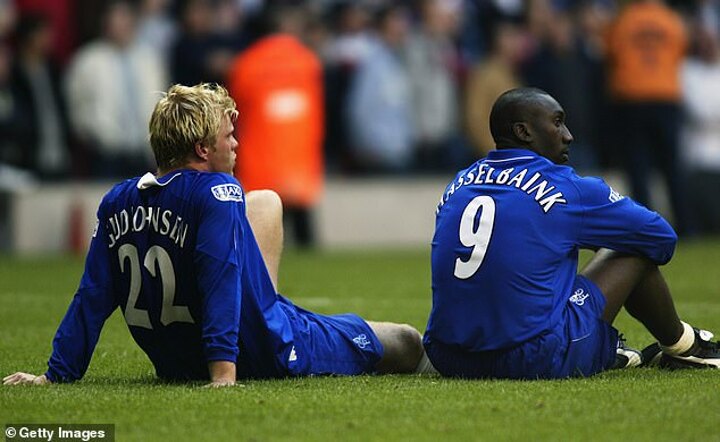 Indeed, Wenger admonished Parlour for trying to sneak a drink on the flight back from Cardiff to London, threatening the 'Romford Pele' with a £30,000 fine and even following him down the aisle to the back of the plane.

Years later, Parlour admitted he drank 10 pints of Guinness with his brothers later that night when out of Wenger's stern gaze and struggled somewhat in training the next day.

Fortunately he put in a man of the match performance in the win at Old Trafford and got away with it.

By 2007, enriched by Roman Abramovich's roubles, they were a very different proposition. Back-to-back league champions under Jose Mourinho, they'd assembled a powerful team.

Just look at the midfield they put out in this Cardiff final - Claude Makelele in the holding role with Frank Lampard, Michael Ballack and Michael Essien ahead of him. Oh, and Arjen Robben came off the bench.

Contrast that with a distinctly youthful Arsenal team with an average age of less than 21 years - the youngest to play in a major English cup final. 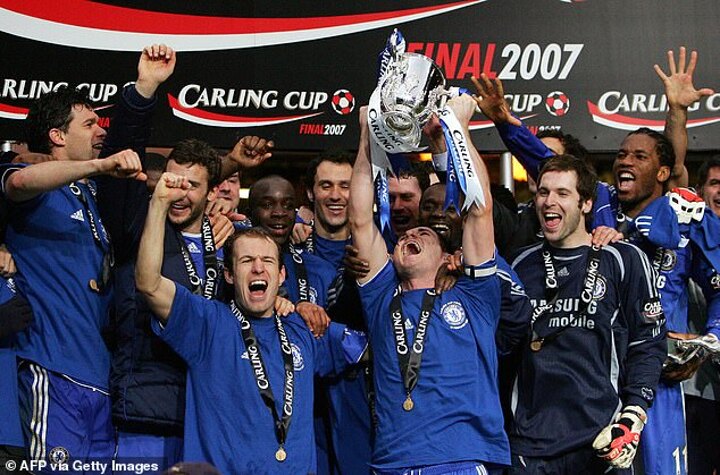 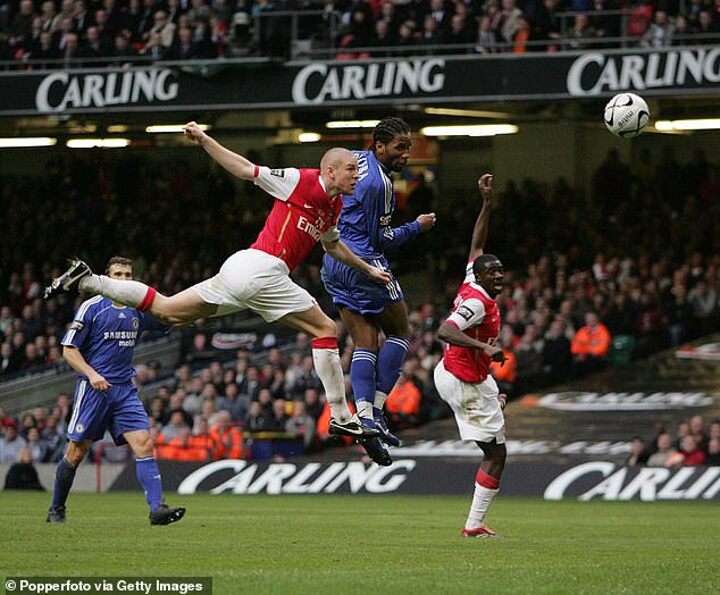 Arsenal had been the pre-eminent team in England before Chelsea came along and snatched their crown and it's almost as if all their pent-up frustrations spilled out in the mass brawl that rounded off a cracking final.

The sight of Mourinho and Wenger storming onto the field to act as peace-makers after a tussle between Kolo Toure and John Obi Mikel over shirt-pulling escalated in the blink of an eye with Lampard and Emmanuel Adebayor wading in.

Referee Howard Webb flashed red cards at Mikel, Toure and Adebayor, where Lampard, quickly dragged away by Cesc Fabregas, got away with a yellow.

What followed was a classic Mourinho soundbite: 'It's a pity that happened. I do understand it's emotional and I understand how the players are feeling. Arsenal were losing the final so I think their emotions took over.'

They weren't early on. Arsenal's kids started the better and Theo Walcott waltzed through to score after 12 minutes. But a composed Didier Drogba finish soon had Chelsea level. 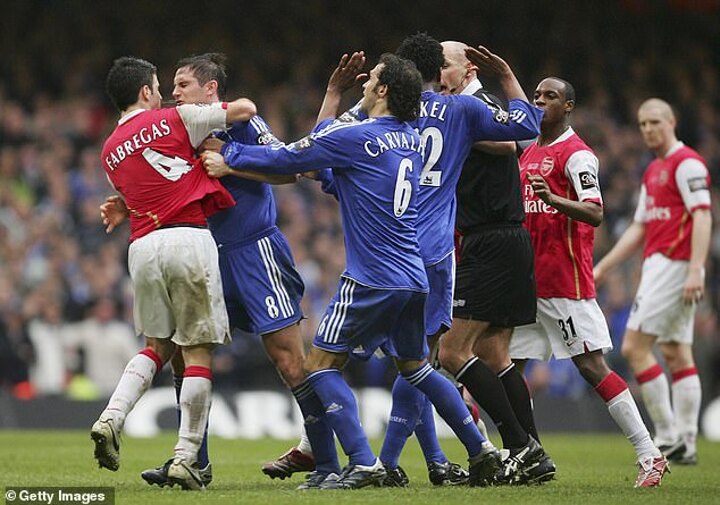 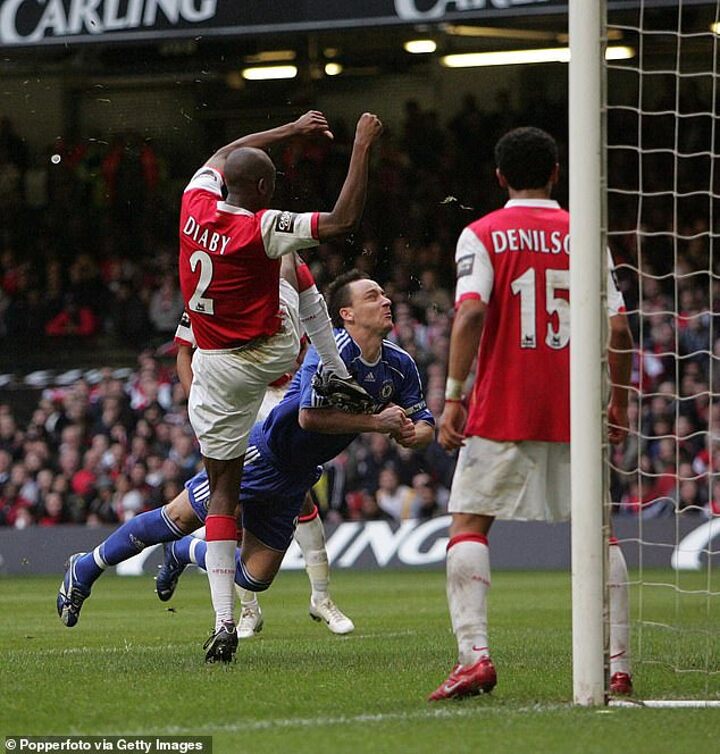 Another memorable moment came early in the second-half when John Terry was knocked out cold when Abou Diaby kicked him in the face while attempting to clear the ball.

Lampard revealed that Terry, despite only waking up in the ambulance, recovered sufficiently to make it to Chelsea's post-match celebrations.

They were celebrating thanks to Drogba, their reliable cup final scorer, who thundered in a header from Arjen Robben's cross with six minutes of normal time left.

But despite also winning the FA Cup that season, it was the beginning of the end for Mourinho's first spell at Chelsea. Amid disagreements with Abramovich, he left 'by mutual consent' on September 20.

Fast forward another decade and both clubs had been affected by the shifting sands of form and fortune.

Arsenal's trajectory under Wenger was one of steady drift and decline and this unexpected Wembley victory was a shaft of sunlight in the twilight of his 22 years at the helm following a season in which he'd been heavily criticised.

Chelsea's journey had been more of a rollercoaster, the chopping and changing of managers often bringing short-term gratitude but long-term friction.

This season was one of the highs, with Antonio Conte delivering the Premier League title. But they would be thwarted in their efforts to win another Double on a warm late May afternoon at Wembley. 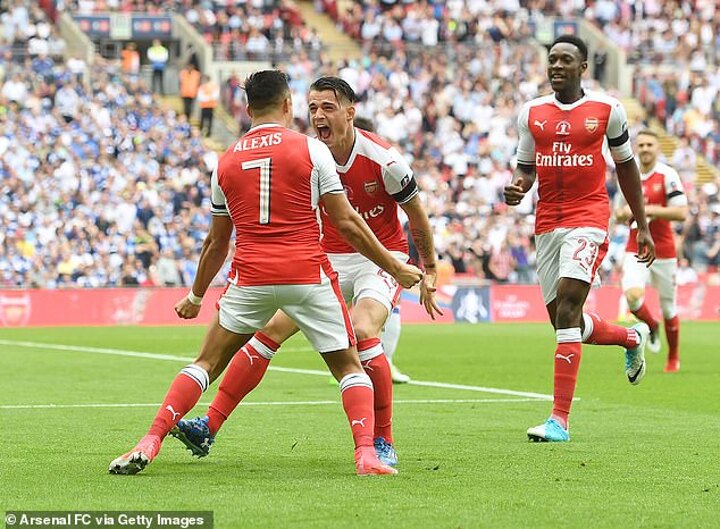 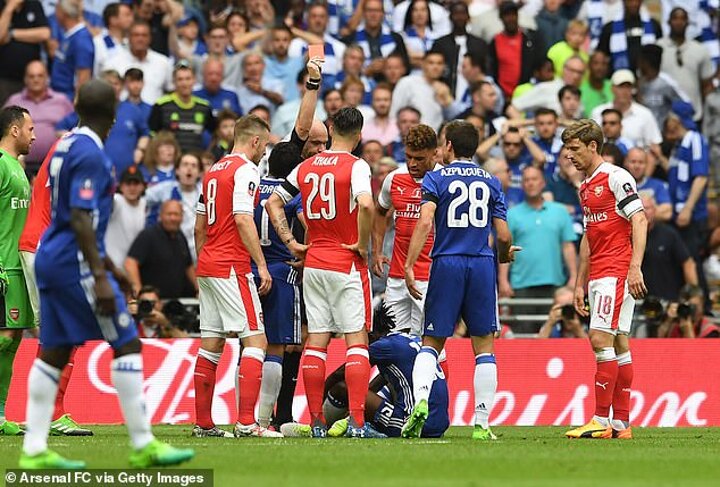 Arsenal, who'd failed to qualify for the Champions League for the first time in 19 years the previous week and had been written off by many before the final, started brilliantly with Alexis Sanchez netting inside four minutes.

The controversy that unfailingly comes with this fixture didn't take long to materialise with Aaron Ramsey flagged offside in the build-up before referee Anthony Taylor overruled his assistant.

Arsenal struck the post twice after that and were further boosted when Taylor showed Victor Moses a second yellow card for diving in the box.

Despite this huge advantage, Arsenal almost contrived to muck things up in a very Arsenal way. Diego Costa equalised for the 10 men with 14 minutes to play, his effort beating David Ospina with a deflection. 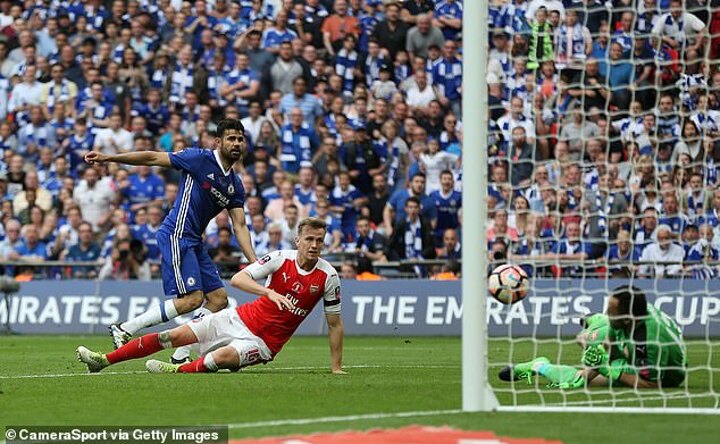 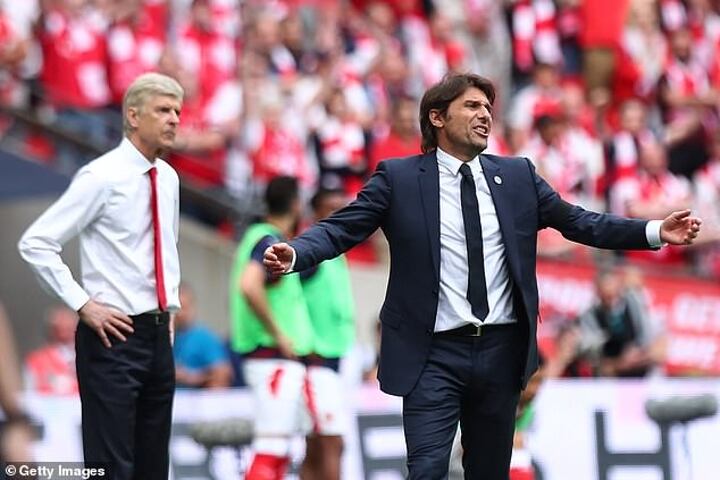 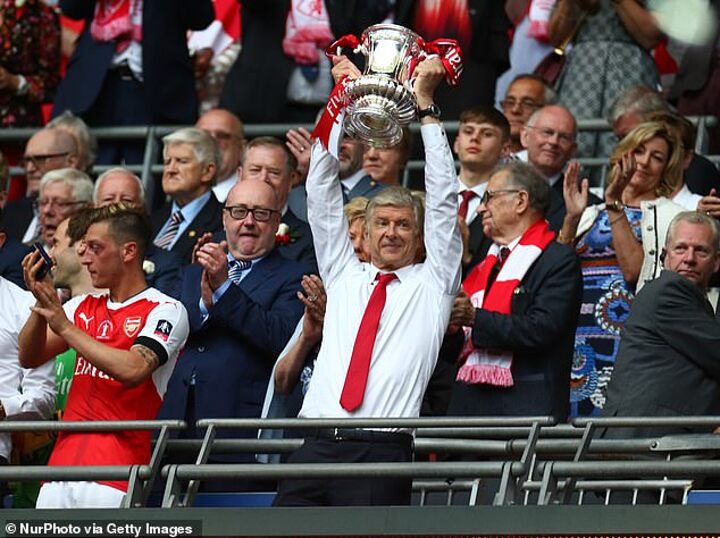 But Arsenal didn't crumble and scored their winner through Ramsey moments later, heading home Olivier Giroud's cross after the Frenchman just came on as a substiture.

His contract was up and Arsenal had slipped from their familiar fourth place to fifth in the league. But this cup win was rewarded with a two-year contract extension four days later.

The Frenchman carried on despite describing some of the criticism he'd faced as a 'disgrace' he'd 'never forget' in the lead up to this final.

In the end, he'd last just one more season. As would Conte.

A final between two teams from London played - for reasons apparent only to UEFA - some 2,500 miles away on the shores of the Caspian Sea in Baku.

With direct flights a near-impossibility, fans of both clubs set out on epic voyages of planes, trains and automobiles. One final unnecessary slog at the end of a pan-continental Europa marathon.

Arsenal, in Unai Emery's first season, had failed to break back into the Champions League, finishing fifth and there were already question marks about Wenger's successor. There would be more afterwards.

Chelsea, in what would prove to be Maurizio Sarri's one and only campaign, had come third but in terms of trophies, it was Baku or bust. 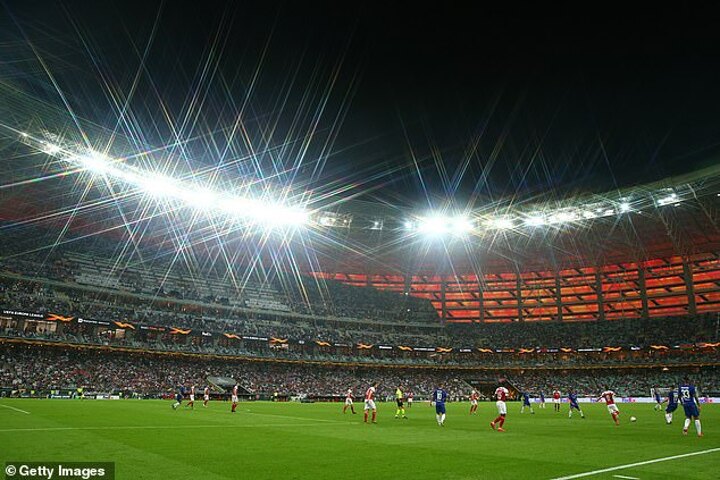 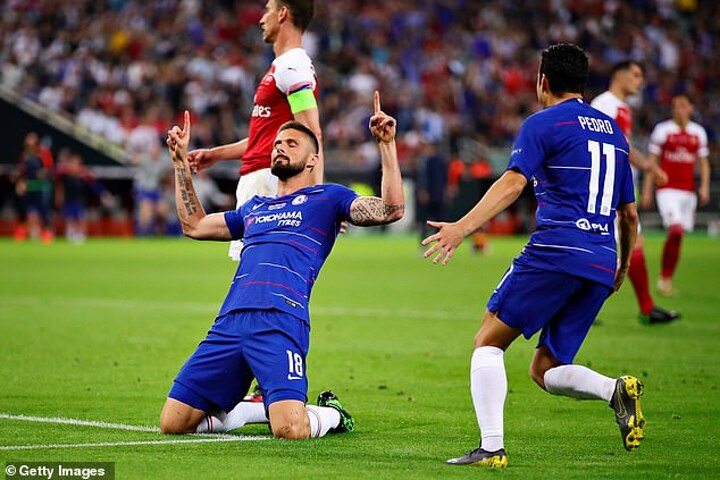 Only 5,000 fans from both clubs actually made it to Azerbaijan, making for a strange atmosphere in a half-full stadium, the match kicking off at 11pm local time.

The first-half summed up the flat occasion but the game sprung to life just after the break when Giroud headed home against his former employers from Emerson Palmieri's cross.

Pedro doubled Chelsea's lead on the hour with a low shot before Eden Hazard ended the contest with a penalty after Giroud had been fouled by Ainsley Maitland-Niles.

The best goal of the night, by Arsenal's Alex Iwobi, proved a mere consolation and Hazard side-footed home shortly afterwards on his final game for the club to kill remote hopes of a fightback. 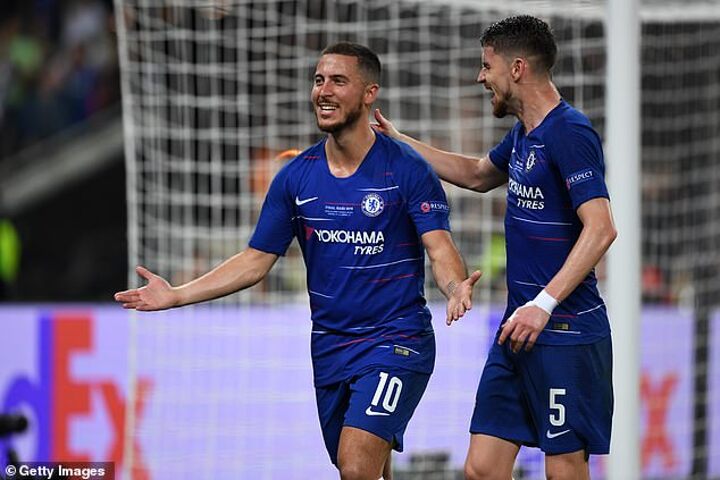 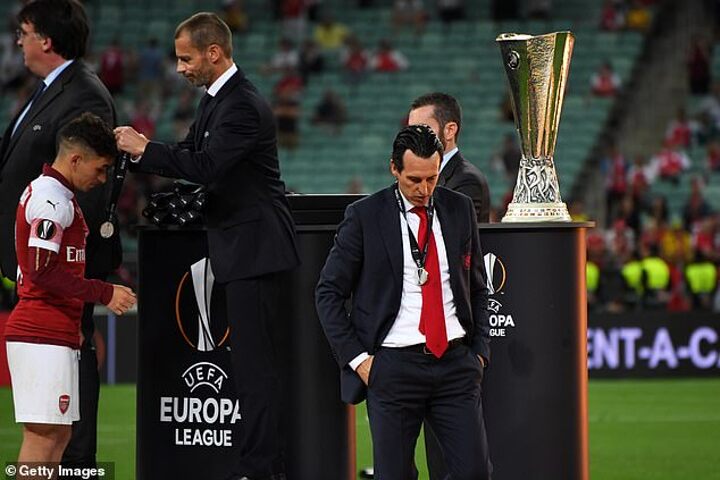 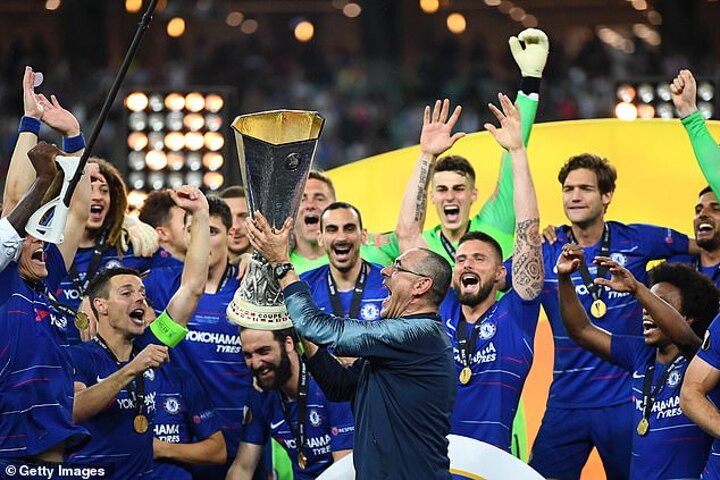 The painful scoreline summed up how far Arsenal had fallen behind their rivals - their performance was listless and summed up by the moody Mesut Ozil trudging off with 13 minutes to play.

Chelsea claimed their fifth European title but it wasn't enough for Sarri, who never looked the right fit.

'In my opinion, I deserve to stay at Chelsea but my opinion is not enough,' said the Italian, resigned to his fate. Two weeks later came the inevitable.