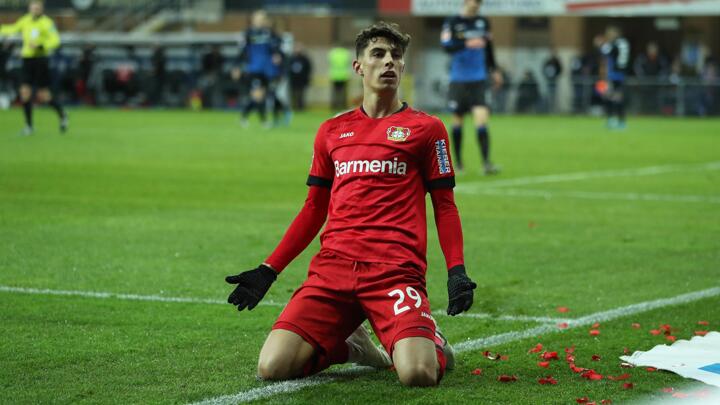 After flicking the ball on to Leon Bailey, the 20-year-old charged forward to receive the return pass and slotted past Freiburg goalkeeper Alexander Schwolow to round off an impressive team move.

The goal is Havertz's 35th in the Bundesliga since his debut in 2016 and he is the first player to hit that tally before the age of 21. He is now closing in on Leverkusen's top 10 scorers of all time - he needs just seven to catch 10th-placed former Leverkusen star Oliver Neuville.

In this calendar year, he has been the most productive player in Europe's top five leagues, scoring nine goals and assisting a further four.

Havertz, who has been playing as a centre-forward recently, has been on fire since the Bundesliga returned earlier this month. Friday evening's strike was his fifth in the four games Peter Bosz's side have played and his 15th in 38 appearances in all competitions this season.

The Germany international is expected to be nearing the end of his career with Leverkusen, as Europe's top teams have been linked in recent months.

Bayern Munich, Liverpool, Barcelona and Juventus are all said to be chasing Havertz, but the attacking midfielder is staying quiet about his future out of respect to his current side.

Leverkusen, meanwhile, have made clear they will not be selling for anything less than €100 million (£90m/$111m).

Havertz has been with Leverkusen since the age of 11 and is contracted to the club until 2022.

Leverkusen moved up to third in the table with the win on Friday, overtaking RB Leipzig, who face Koln on Monday.