Frank Lampard has been pleased with Kepa Arrizabalaga's reaction to being dropped, but Chelsea's head coach has refused to confirm whether the world's most expensive goalkeeper will return to the starting XI for Monday's home game against Manchester United. 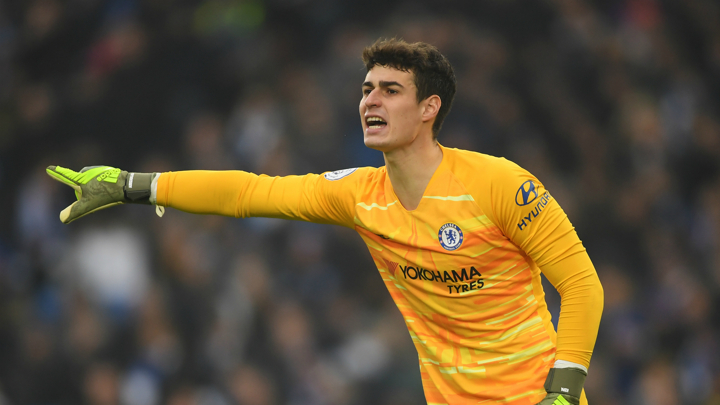 Kepa - a £72 million ($94m) signing from Athletic Bilbao in 2018 - was surprisingly left out for the trip to Leicester City a fortnight ago, with the veteran Willy Caballero handed a rare Premier League start for a game that finished 2-2.

Asked whether his usual number one would return against United, a smiling Lampard told a news conference. "I've decided. You'll find out [on Monday]."

He added: "The reaction has been good, as I'd expect. [He has been] training hard, head down. I haven't had lots of conversations with him this week and it'll be a decision for me to make.

“It doesn’t matter when you came to the club, I don’t take into account the fee. It’s the training that counts."

When it was suggested he may have been looking to give Kepa a "wake-up call", Lampard replied: "I wouldn't say that. I wasn't looking for that necessarily. I think I spoke around the Leicester game and said that I have to pick the team as I see it on form in every position, so it was just a selection on that day.

"Now I know with goalkeepers there's a bit more to it than that. We know it's a slightly different role than everybody else. But I want everybody's reaction all the time to be spot on and he came out the team, I know what that means, I know how that will feel for him.

"Every player has it, maybe [Lionel] Messi is the only one who doesn't, or [Cristiano] Ronaldo, but the rest of us do. And I had it in my career many a time, it's part and parcel of being a footballer and you have to show character in those little moments.

"I've been pleased with the reaction."