Dean Henderson has won the praise of Jose Mourinho, but two of his other former Manchester United players do not make his England XI. 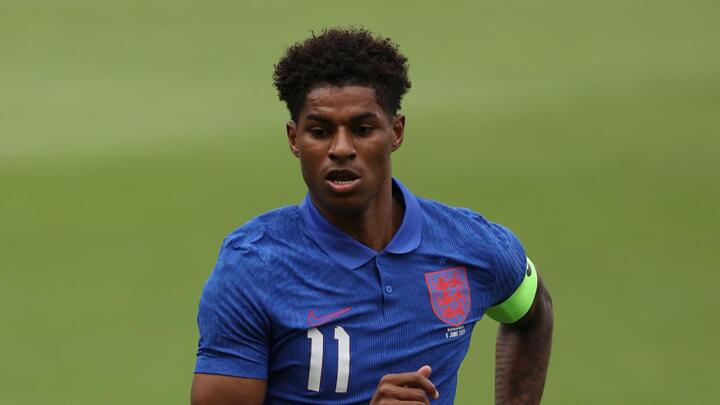 Jose Mourinho does not think Manchester United duo Marcus Rashford and Luke Shaw should be in England's starting XI to begin Euro 2020.

The former United boss has been involved in media controversies around both players in the past.

Mourinho feels Chelsea defender Ben Chilwell is a better option than Shaw at left-back for England, who open their campaign against Croatia at Wembley on Sunday in a World Cup semi-final rematch.

That is despite Shaw having a fantastic season for United, which saw him recently named the Players' Player of the Year at the club.

"I know that he plays normally with Chelsea in a five, but he is intelligent, he covers the space and the diagonals inside very well, he's dangerous in attack, he's good in the air and good on set pieces.

"He can defend well the possible long build up from Croatia on the first phase. He is very calm under pressure. I like Chilwell a lot.

"[Shaw] had a good season and clearly an evolution in terms of emotion, professionalism. But Chilwell has something more, especially with the ball, the way he thinks."

The new Roma boss also feels Rashford's only positional option is to play on the left of attack, where he would prefer to line up with Aston Villa star Jack Grealish.

Mourinho believes Grealish is an "untouchable" selection and compared his play to that of Real Madrid great Luis Figo.

United target Jadon Sancho was not in Mourinho's team, which does include Manchester City star Phil Foden and Harry Kane, who thrived under his management at Tottenham.

"For me, Marcus Rashford can only play there. When he plays on the right, he is completely lost.

"He is dynamic but on the right totally broken. He is very good on the left attacking spaces. But Grealish, for me, is tremendous.

"What he creates and his personality – 'give me the ball' – he reminds me a little bit of Luis Figo. I don't like making comparisons, especially with a Golden Ball winner, but Grealish reminds me of my Figo.

"The way Grealish gets the ball and attacks people, gets fouls, gets penalties, he is very powerful, I like him very much.

"So I would say Grealish on the left, Mason Mount as the number 10 and because I like the wingers to come inside, I would play Phil Foden on the right."

Mourinho a fan of Henderson

One United player who would be in Mourinho's starting team, though, is goalkeeper Dean Henderson, who he would start over Jordan Pickford.

"I am a Henderson fan," said Mourinho. "When I was at United he was a kid, and I tell this story because it shows his nature.

"He came to my office asking for a loan, he went to Shrewsbury, but this kid said to me then, 'When I come back, I want to be number one'.

"We looked at each other because we had [David] de Gea and this kid never played one game, but he has had incredible development.

"The loans were all very successful. The way United organised them I think United did amazing for him and he did amazing for himself. He has this arrogance in him, this trust and belief which I think an England goalkeeper needs."

Mourinho, though, would like to see Jude Bellingham play alongside Rice as the tournament progresses, describing the Borussia Dortmund prospect as "perfect" for such a role.

Kyle Walker, Tyrone Mings and John Stones made up the rest of his back four alongisde Chilwell.

England, who are in Group D, also face Scotland on June 18 and the Czech Republic on June 22.