The new-look Arsenal side secured an impressive 2-0 victory at Crystal Palace in their opening Premier League game of the season at Selhurst Park on August 5. 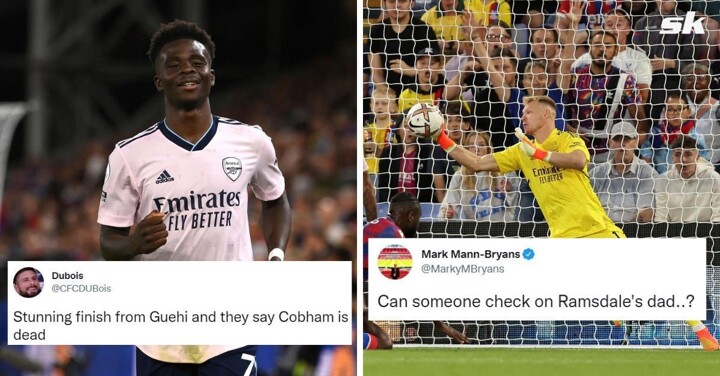 The Gunners got off to an electric start and created the first real opportunity of the clash after an incredible run from new signing Gabriel Jesus. However, his effort was blocked before Gabriel Martinelli screwed a simple chance horribly wide.

Fellow new signing Oleksandr Zinchenko had a decent effort on target parried away shortly after.

Mikel Arteta's side dominated much of the play throughout the first period. They eventually took the lead when Martinelli poked home following some abysmal Palace defending from a corner. Zinchenko, whose header set up the goal in the 20th minute, enjoyed an excellent first half for his new team.

Despite a few shaky moments, including some poor kicks from goalkeeper Aaron Ramsdale, the Gunners took a deserved lead into the break.

However, their efforts were tainted somewhat by a blatant dive from Granit Xhaka near the end of the half. It earned the much-maligned midfielder a booking.

The hosts improved early in the second half. Ramsdale was forced into a smart one-on-one save from Eberechi Eze, following some sloppy play from Ben White.

Patrick Vieira's side were well on top towards the end of the clash but were ultimately unable to find a breakthrough against a stubborn Arsenal backline.

Bukayo Saka's deadly whipped cross was turned into his own net by Marc Guehi five minutes from time. It was enough to secure an impressive away win on the opening day.

Jesus caused all sorts of carnage throughout the game with his high-press from the centre-forward role, as he looked as though he had something to prove. He won all of his dribble attempts (6) and eight of his 16 attempted ground duels.

The 25-year-old was often left on the bench by Pep Guardiola at Manchester City, but now looks set for a full season as Arsenal's first-choice number nine.

Meanwhile, William Saliba was also immense in his first Premier League appearance for the club, three years after the 21-year-old initially signed. Big things are expected of the French international centre-back this season. He won the Ligue 1 Young Player of the Year award last term on-loan at Marseille.

Saliba was named Man of the Match on his competitive debut for the club. His performance dominated much of the chat among Arsenal fans following the final whistle.

Here is a selection of the best Twitter reactions, with Gunners fans generally delighted by the victory over their London rivals: