U.S. men's national team full back Sergino Dest drew praise after his massive goal on Wednesday against Costa Rica, with USMNT boss Gregg Berhalter claiming that the Barcelona defender can "be as good as he wants to be". 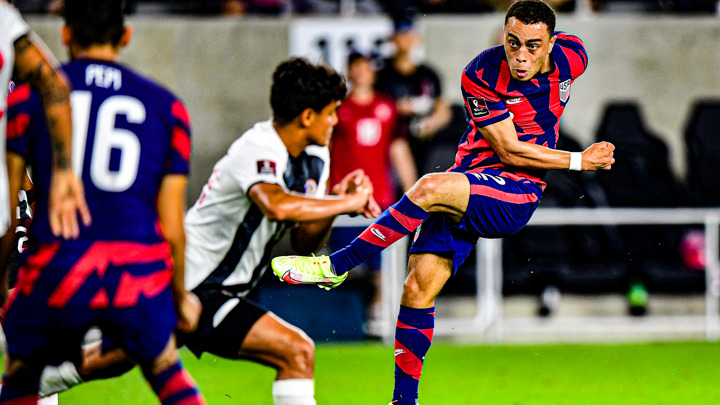 With the U.S. down 1-0 after conceding within one minute, Dest fired an equalizing goal into the top left corner in the 25th minute, giving Keylor Navas no chance to make a save.

Tim Weah then created the USMNT's second goal, leading the way in the 2-1 win that now has the U.S. back on track in its World Cup qualifying campaign.

"I was just running to my teammates, because we all do this together so I think we needed that moment."

Dest was also asked about scoring on Navas, prompting the Barcelona star to look back at the club's Champions League defeat to PSG in the spring.

Barca were crushed 4-1 in the first leg, with Dest playing 71 minutes, before drawing 1-1 in the second game to end what would be Lionel Messi's last Champions League run with Barcelona.

When asked about the significance of scoring on Navas, in particular, Dest added: "It's great to play against Navas again. Last year, my shot didn't go in the remontada against PSG, but today it went in and I was really happy with it. Before the game, we said hi to each other so that's also good."

USMNT boss Gregg Berhalter was full of praise for Dest after the win, despite recent criticism of the Barca star's defensive efforts.

Dest provided a goal and an assist on Wednesday and was named the USMNT's Man of the Match for his efforts.

"Sergino is an interesting player because it's almost like the sky's the limit for him," Berhalter said of Dest. "He can be as good as he wants to be and you saw today with his attacking play. It's unreal.

"With him and Yunus [Musah] on the side together, and Brenden [Aaronson], it's very difficult to deal with for the opponent.

"But, for Serge, it's just hanging in there mentally, really pushing himself to be the best when he's on the field. And I think in these moments again, we're forgetting how young of a player he is. A lot of times, defenders rely on experience, and he just needs to gain experience.

With Wednesday's win, the U.S. now has 11 points through the first six games of World Cup qualifying, keeping it right in the hunt atop the table.

Up next will be a clash with Mexico on November 12 in Cincinnati before traveling to Jamaica to finish off this year's slate of games four days later.

World Cup qualifying will resume in January, with the U.S. set to face El Salvador, Canada and Honduras in the first window of 2022.