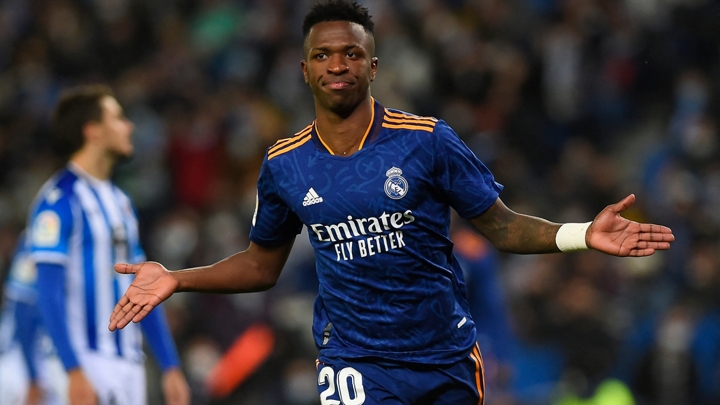 The 21-year-old, who has been in fine form this season, channelled his Favela boy origins to stun Oyarzabal, delight his supporters, neutral fans, and even leave some Real Sociedad fans impressed.

Vinicius, who was in the sights of Oyarzabal, received the ball from right-back Ferland Mendy and left the onrushing Sociedad player completely stranded with only his first touch.

Vinicius scored his tenth league goal of the season in the game and completed a number of dribbles, but his skill to go past Oyarzabal was perhaps the biggest highlight of the game.

The Brazilian joined Los Blancos in 2017 from Flamengo in a big-money move. Widely regarded as one of the world's best talents at the time, he struggled to show the reason why he was so highly rated.

The 21-year-old is now showing his quality and fans are beginning to appreciate the young Brazilian.

One Twitter user echoed the sentiments of many fans. "Vinicius is probably the most exciting player to watch right now, and I can’t even lie," @dayjee_1 wrote. "Give him the ball and let him move your attack down the opponent’s box."

"Imagine Vinicius is a Barcelona player and he does HALF the things he's doing at Madrid this season," Twitter user, @MrOdanz wrote on the app in a subtle dig at Real Madrid's El Clasico rivals.

GOAL Africa posted Vinicius Jr's stats on their Facebook page after the match and fans praised the 21-year-old.

"He was excellent today against Real Sociedad. I'm surprised he didn't win man of the match award; instead it was handed over to Jovic," Damian West wrote.

Levi Levin on Facebook sees a Ballon d'Or in Vinicius Jr's future. "Vinicius will win the ballon d'or if Brazil wins the world cup," he wrote.

There's no doubt about Vinicius Jr being one of the standout players of the season and fans will be looking forward to more skills from the Brazilian.