Barcelona are desperate to muscle in on the Brazilian market following Real Madrid’s agreement to sign Endrick Felipe, the next big thing to come out of Brazil in the eyes of many. The latest starlet they have been linked with is Vitor Roque. 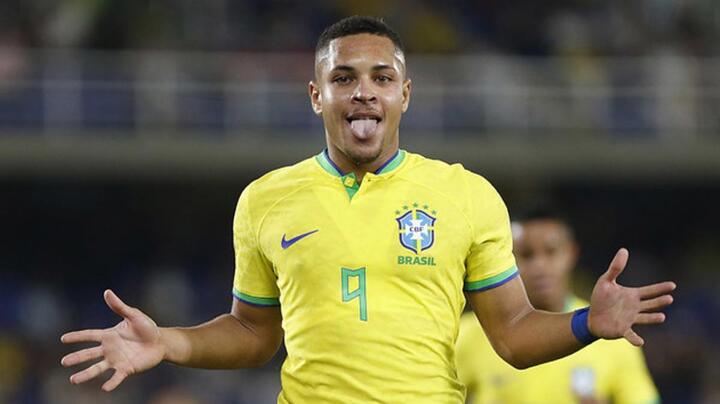 Relevo say that the meeting between Deco and part of the recruitment department at Barcelona was regarding the 17-year-old, who currently plays for Atletico Paranaense. They will try to negotiate a deal for Roque that comes in under €25m, although the way in which they reach that fee might be inventive.

Sport believe it is more likely to be closer to €30 in three equal payments. Atletico are open to a sale and Roque is keen on the move too. Who exactly is he though?

Roque came through the ranks at America Mineiro, before moving to Cruzeiro. There he burst onto the scene, scoring 6 times in just 16 appearances, leading Atletico PR to buy him for a fee of €4.7m already. Turning 18 towards the end of February, Roque already has 52 senior appearances to his name, from which 19 direct goal contributions have come.

At Atletico PR, he has 7 goals and 3 assists in 36 appearances, although around half of those appearances were from the bench. Despite being relatively short, Roque has a stout figure and exhibits good strength, for that reason he has picked up the nickname of Tigrinho, little tiger.

He profiles as the typical Brazilian forward at this point in his career. Confident with the ball at his feet, Roque will back himself to beat a defender, but combines well with his teammates in order to unlock defences too. In addition to his strength, he is quick too.

Versatile, Roque can play across the front three or as a second striker, but has been used most often through the middle so far in his career. Otherwise, he mainly begins off the right, but most of his goals have come through the middle. He also ranks well in his defensive numbers compared to his positional peers, registering in the top 3% for interceptions.

While Roque is a flare player, capable of thinking one step ahead of the defender, he stands out for his goalscoring instinct too. Comfortable using both feet in order to put the ball away, Roque is surprisingly good at converting crosses. Despite not being a major target to hit, Roque reacts ahead of the defenders often. He is currently top scorer at the South American under-20 championships.

Whether Barcelona can secure his signature is another matter. Even with a favourably structured deal, the fact that money is not being used for the first time currently, it would be a surprise to see the Blaugrana spend so heavily.