Marc-Andre ter Stegen was the Barça hero in the shoot-out, where Riqui Puig held his nerve. Ousmane Dembélé led from the front in the absence of Messi. 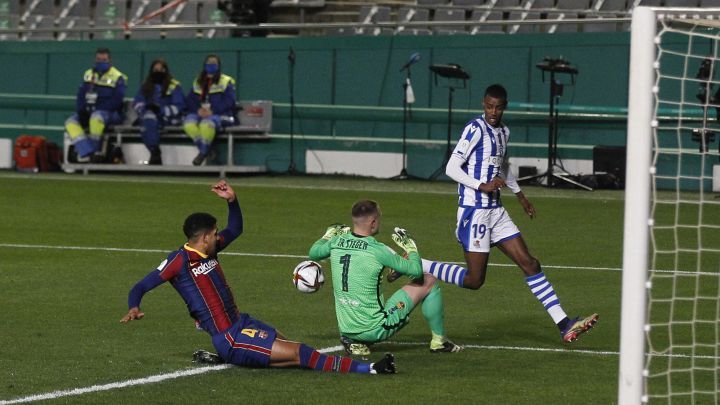 Barcelona secured their place in Sunday’s Spanish Super Cup final where they will play either Real Madrid or Athletic Bilbao after Ronald Koeman’s side overcame Real Sociedad in a penalty shoot-out after the game ended 1-1 following 120 high-octane minutes in Córdoba’s Estadio Nuevo Arcángel.

Here’s how Barça’s players fared on the night.

Ter-Stegen: The German stopped everything there was to stop, including the first penalty in the shoot-out and the second, which was the first Mikel Oyarzabal had failed to score in his professional career.

Mingueza: Koeman opted for the greater defensive virtues of the La Masia graduate over Sergiño Dest. The right back held his own but struggled a Little when the fresh legs of Barrenetxea came off the bench.

Araujo: The central defender had the toughest task of the night with Isak and Oyarzabal to deal with. He gradually contained the Swede and pushed Oyarzabal away from the areas where he does the most damage.

Lenglet: Better on the deck than he was in the air, where he made a few errors under La Real crosses.

Jordi Alba: Portu had the better of the early duels between the two but Alba’s experience gradually told. He didn’t offer much in attack in the absence of his usual partner in Messi.

Busquets: The job is still his. A vintage performance.

De Jong: De Jong is starting to play like the box-to-box midfielder Barça shelled out a fortune for. Perhaps on Wednesday a little too much. He scored the opener with a fine header but conceded the penalty for La Real’s equaliser at the other end. Hit the post during the shoot-out.

Pedri: A little off-key without Messi to link up with, Barcelona enjoyed their best spells when he dropped back to seek the ball between the lines.

Dembélé: Barça’s best outfield player. Some electric runs that took out the entire defence, the Frenchman ran himself into the ground, coming back on after a bout of cramp to score in the shoot-out.

Griezmann: Griezmann is not a number nine nor does he possess that undetectable element that Messi has been drawing on recently. He isn’t suffering as much in front of goal this season but still isn’t quite the decisive player he was. His penalty missed by a country mile. His assist for De Jong was excellent though.

Braithwaite: The Dane cannot be faulted in terms of effort and grit but doesn’t seem to be the answer to Koeman’s need for a “natural striker.” His incisive ball for Griezmann started the move for Barcelona’s goal.

Trincão: He removed more than he added simply by pushing Dembélé from the right wing to the left.

Riqui Puig: Koeman handed him some rare minutes of import and he responded perfectly by holding his nerve to bury the decisive penalty.

Pjanic: With Pjanic and Puig on the pitch Barça had more of the ball but lost a bit of control in the midfield.

Júnior: Koeman deployed him out of position on the right, but fortunately for Barça La Real were by then ploughing the other side of the pitch with Adnan Januzaj.