It takes a special talent to stand out as a young player in France given this is the country's most fruitful era for producing stars in a generation - but Eduardo Camavinga has done it. 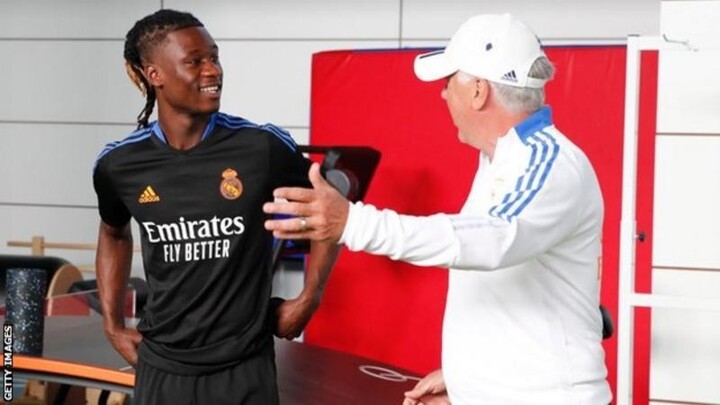 And for this gifted teenager, it is simplicity rather than the spectacular that has been the key to his rise.

The Angolan-born former refugee, who arrived in France as a two-year-old, settled into the Rennes first team at the age of 16 as if he had been there for years.

Now, at just 18, he is at Real Madrid - one of the biggest clubs in the world - and scored on his debut at the Bernabeu against Celta Vigo on Sunday, making an instant impact after a £27m summer move.

'When he plays, he smiles'

"He is a team player, and an elegant player," France Under-19 coach Landry Chauvin, who worked with Camavinga in the youth set up at Rennes, tells BBC Sport. "He is not an individual or a soloist; he respects the collective.

"He plays with his head up. He is always focussed on the position of his team-mates. When he plays, he smiles.

"When they make their professional debut, a lot of young players think they've arrived, so they complicate things. Eduardo is one of those who knew to stay simple, because he is so intelligent." 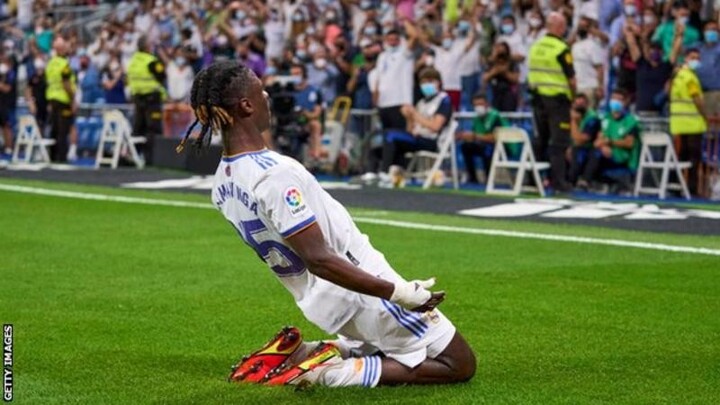 After exploding onto the scene in Ligue 1, the midfielder became the youngest senior France international since 1914 when he made his Les Bleus debut against Croatia in the Nations League in September 2020 - and scored his first goal a month later in the 7-1 friendly win over Ukraine.

As interest in him and speculation around him grew - with Europe's top clubs watching as his contract ran down - those distractions had an impact and his performances began to wane.

"He was starting to fall out of the Rennes starting XI last season," says French football expert Robin Bairner.

"Even at the start of this year, he hasn't played to his best level. He started the first game of the season but was substituted and roundly criticised for his performance. He's been a substitute ever since.

"While I do think he has the ability to play for Real Madrid, it is a very difficult time to be going there. With his form and confidence, it is going to be difficult for him to slot into the team. The fans there can turn on you if they expect you to be world class and you are struggling."

"We must give him time," Chauvin says. "He has had a lot of critics in France, but we must let him work, step by step. It is normal that his second season is more difficult."