Cristiano Ronaldo showed his disgust at Portugal for conceding a second goal to Ghana in their 3-2 World Cup win with scorer Osman Bukari performing the iconic ‘Siu’ celebration. 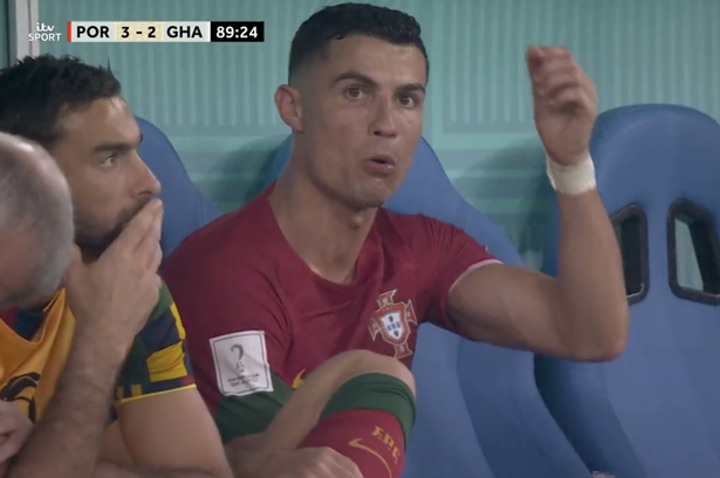 The superstar became the first men’s player to score in five World Cups after firing home his country’s opener from the spot on 65 minutes after being fouled in the area. Joao Felix cancelled out Andre Ayew’s equaliser before Rafael Leao made it 3-1 by the time Ronaldo was substituted off with a little less than 10 minutes to go.

Just before the clock struck 90 minutes, Bukari grabbed one back for Ghana much to the fury of Ronaldo on the bench. Whether it was in tribute or jest, Bukari’s celebration delighted the Black Stars supporters.

Ronaldo - who looked visibly emotional during the national anthem pre-match - was playing for the first time since his contract with Manchester United was mutually terminated following his controversial interview with Piers Morgan last week. It was the 37-year-old’s first outing since November 6 when United lost 3-1 to Aston Villa in the Premier League.

The attacker missed The Reds’ final two games before the break for the World Cup due to illness and sat out Portugal’s 4-0 warm-up win over Nigeria due to gastroenteritis. It’s the first time Ronaldo has been a free agent in his career and his future is unclear.

The veteran has come in for heavy criticism after last week’s comments about United and boss Erik ten Hag. But in a Portugal press conference earlier this week, he insisted that none of it was affecting him ahead of his final World Cup.

“I am bulletproof — I wear an iron suit,” he declared. “In my life, the best timing is always my timing. I don't have to think about what other people think. I speak when I want.”

He requested: “Stop asking my team-mates about me. If you ask other players about Cristiano Ronaldo, I would be upset. If you want to ask them about the World Cup and the team, I would like you to do that.”