Barcelona boss Ronald Koeman has confirmed that Clement Lenglet has assumed responsibility for his mistake against Cadiz, making clear that the Frenchman is trying to make amends. 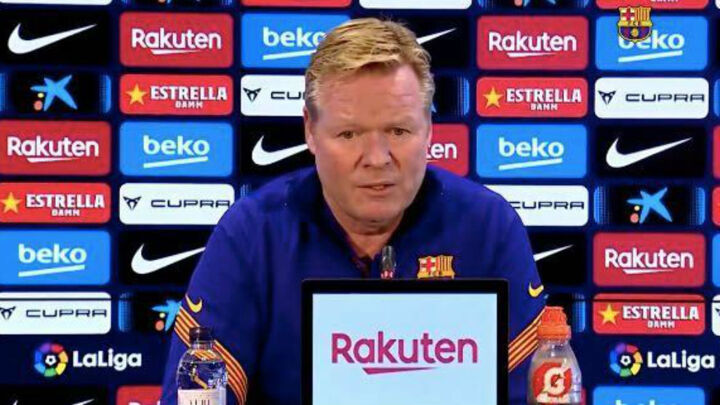 The penalty given away by Lenglet is the latest incident he has been involved in this season, with another high-profile one coming in the Clasico defeat to Real Madrid, when he pulled Sergio Ramos' shirt in the box.

"I spoke to him this morning. He is serious, a very good professional, who is taking this very personally," Koeman said on Tuesday ahead of Wednesday's match at home to Elche.

"It's a play in which he can do better and it's true that he has been in some moments when we have made mistakes, but we have also made mistakes in attack and with other players.

"At 2-0, a play in the last minute is not so decisive. Nor can he accept that the entire problem is his own. He has to improve things, like any player."

Toni Freixa has announced that he has reached an agreement with an investor, who is willing to pump 250 million euros into Barcelona to fund three 'superstar' signings, but Koeman does not want to get involved in the presidential election race.

"I don't know if this is true because until I talk to the new president, I can't say anything. I don't know," Koeman stated.

"We have to wait until we know who the new president is. He will be the one who will have to decide the future of the coach, the team... [and] see what possibilities there are. I'll wait until the 8th [of March, one day after the election]."

Barcelona seem to have missed Ronald Araujo since he went down with an injury, but Koeman has revealed that he could return against Sevilla in LaLiga Santander at the weekend or against the same opponents in the second leg of their Copa del Rey semi-final next Wednesday, February 3.

"He won't be here tomorrow," the Dutchman confirmed.

"He's improving, but first we have to do the group training to get the feeling if he's going to make it or not. There are doubts. We have to wait.

"Maybe at the weekend, next Wednesday... it's not good to give a concrete date. It all depends on how he improves."

Despite the disappointing results against Sevilla, Paris Saint-Germain and Cadiz, which have left Barcelona staring down the barrel of another trophyless season, the 57-year-old is trying to keep some hope alive.

"[My mood was] dreadful the other day after the match because I feel responsible and I think about how to improve," Koeman said.

"It affects me, but I'm not going to give up. I tell the team that we can do it. It depends on the next games.

"We have to win every game to be able to fight [for the title]. There is hope and, while there is hope, we have to go for everything."