Piers Morgan claimed that 'even Messi knows' that Cristiano Ronaldo is the greatest footballer in history after sharing a hilarious picture on Thursday night. 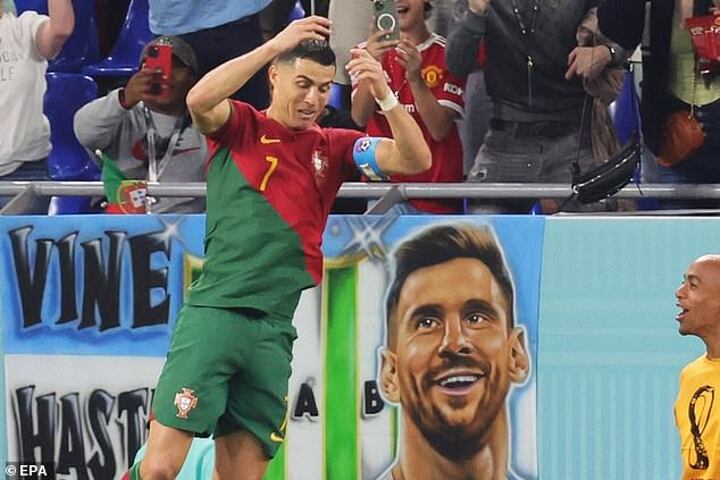 Ronaldo took part in Portugal's World Cup opener with Ghana and made history by becoming the first player ever to score in five consecutive World Cup competitions.

As the 37-year-old celebrated with his trademark 'SIU' celebration, he wandered in-front of a banner featuring his Argentinian counterpart and Morgan took the opportunity to share the moment with a cleverly worded caption. 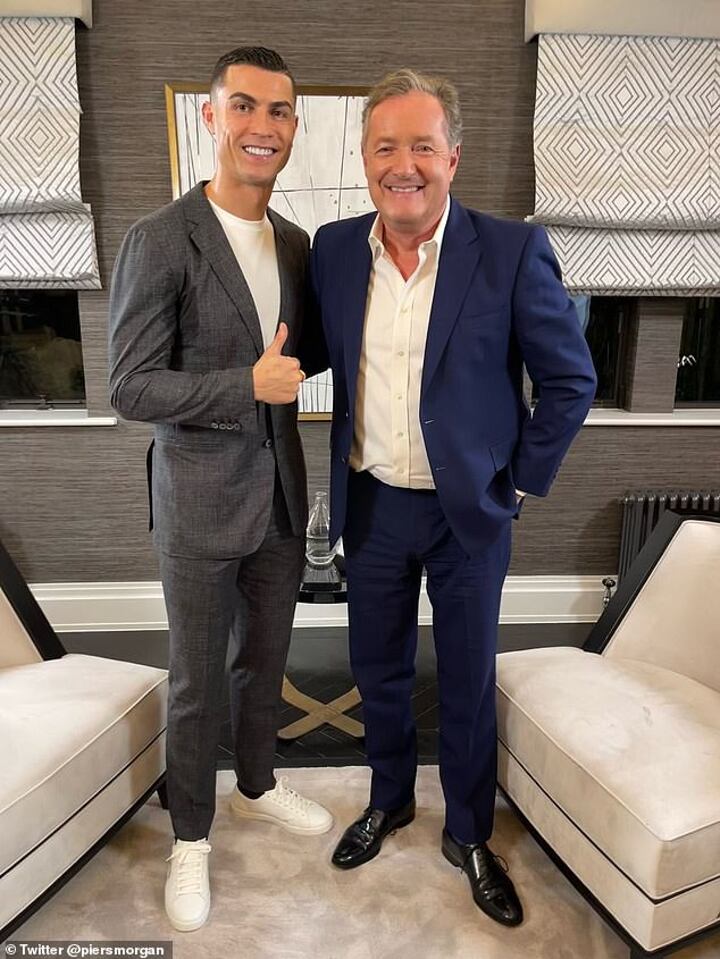 Taking to his social media on Thursday, Morgan wrote: 'Even Messi knows' with a goat emoji added at the end to represent the acronym; greatest of all time.

Veteran forward Ronaldo netted from the spot just after the hour mark to break the deadlock against Ghana in their first group game on Thursday evening.

It came in controversial fashion with some fans and pundits suggesting he went down easily under the challenge from Southampton's Mohammed Salisu.

In doing so, he moved into a league of his own - ahead of Messi, Pele, Miroslav Klose and Uwe Seeler - to become the only player to score at five World Cups.

Morgan has been a long-standing advocate of Ronaldo's ability on the pitch and recently even suggested his club Arsenal should sign the Portugal star - after he left Manchester United by mutual consent this week.

Sportsmail revealed earlier this week that United have not paid any compensation for the remaining seven months of his £500,000-a-week contract at Old Trafford. 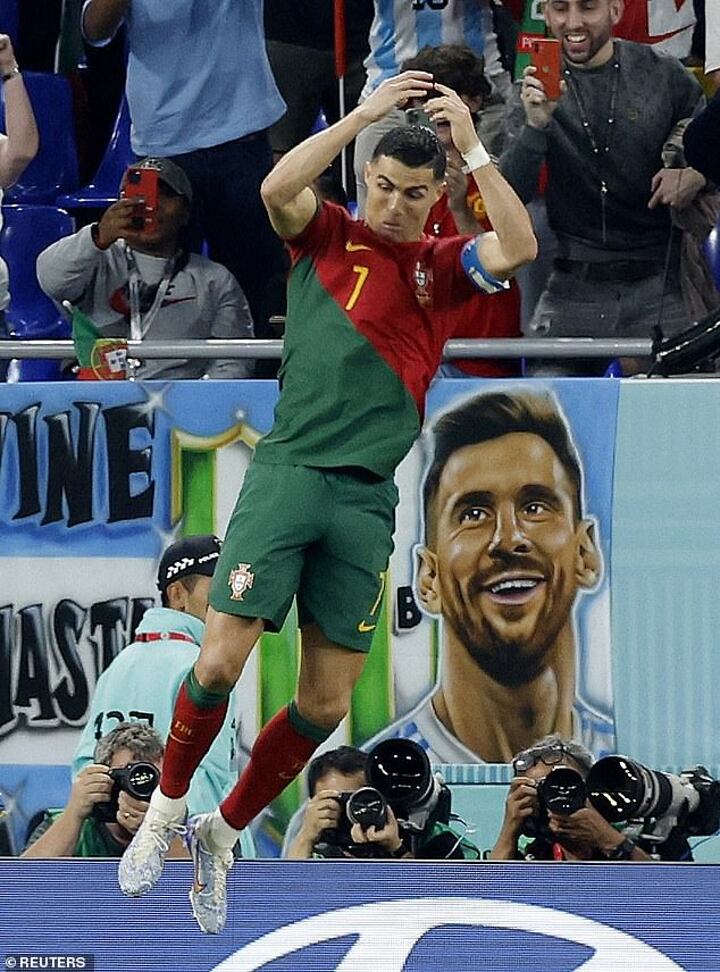 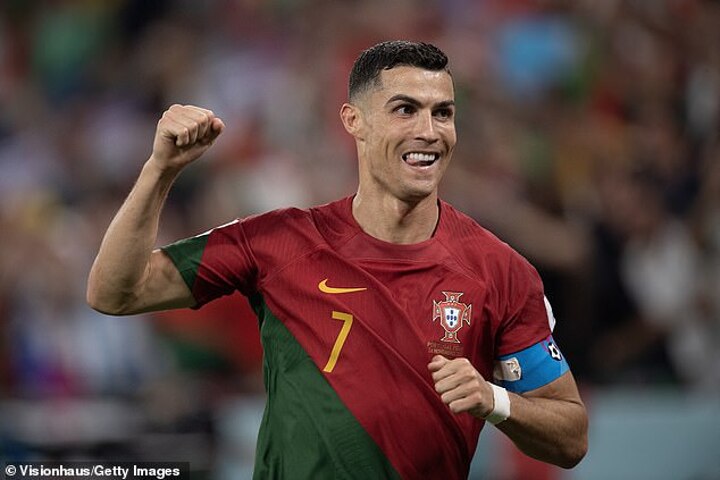 The 37-year-old's departure from the club stemmed from his bombshell interview with TV star Morgan where he vented his criticisms with the structure of Manchester United, past and present managers and the club's owners.

Ronaldo said: 'I don't have respect for him [ten Hag] because he doesn't show respect for me. Some people, they don't want me here - not only the coach but the other two or three guys. Not only this year, but last year too.'

He also urged fans to continue their protest against the Glazers' ownership.

He said: 'The fans, they're always right. I think the fans should know the truth - should now that the players... we want the best for the club.

On Tuesday it was announced that he would leave the club effective immediately in a blunt a 67-word statement on the club's website.

Portugal ran out 3-2 winners in their opening game but it wasn't for some late drama that nearly saw them pegged back by the Black Stars.

Ronaldo gave his side the lead from the spot before Joao Felix and Rafael Leao both netted to wrap up three points for Fernando Santos' side.

Ghana's Andre Ayew and Osman Bukari both netted to bring the deficit to just one goal but they weren't able to find an equaliser - despite a moment of madness in the final moments.

Ronaldo will be hoping to add to his tally when they take on Uruguay in their next group stage encounter. Meanwhile, Ghana will take on South Korea. 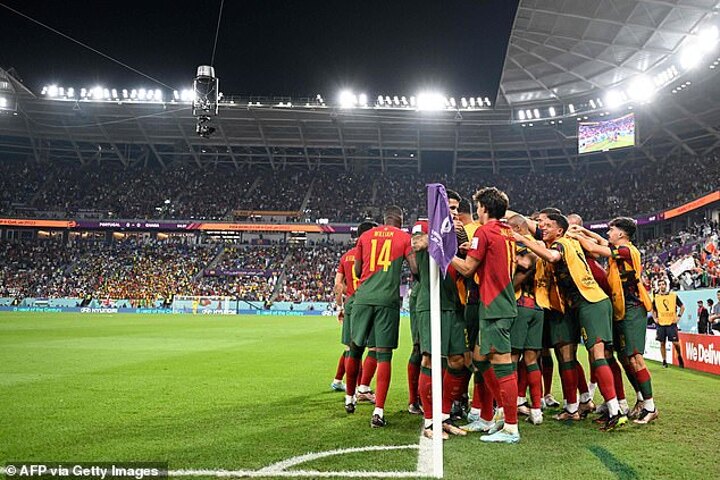