The Champions League group stages are nearing their conclusion, and the fates of the teams headed for the last-16 are looking pretty definitive after matchweek five. 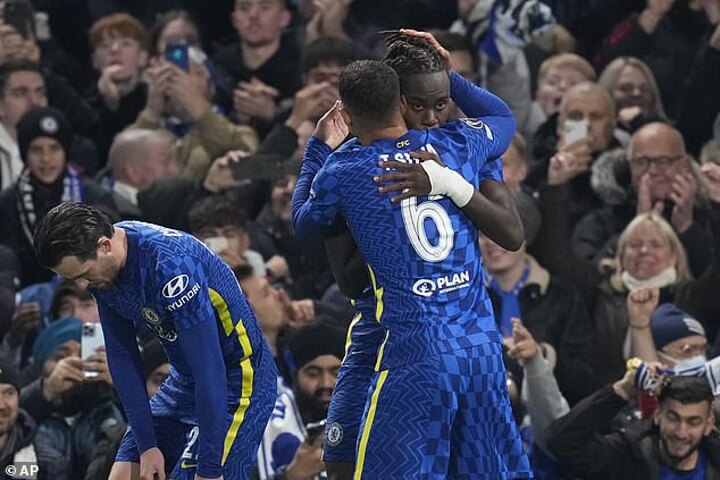 Manchester City, United, Chelsea and Liverpool are all guaranteed spots in the next round to make it a clean sweep of English teams in the hat for the knockout draw - with every Premier League side grabbing wins this week.

City saw off PSG, United beat Villarreal away from home, Chelsea thumped Juventus and Liverpool notched a win over Porto. The Blues were the pick of the bunch as they smashed four past the Serie A giants with a host of top performers.

But who has made it into Sportsmail's Champions League team of the week on this occasion?

It hasn't been an easy season for the Spaniard in the sticks, with Manchester United dealt a handful of difficult outings this season that has resulted in Ole Gunnar Solskjaer being sacked.

But while it was only one game under new interim boss Michael Carrick, De Gea looked like his old self - make a couple of world class stops to keep Villarreal out and help secure a clean sheet in the 2-0 away win.

He was hailed as 'an absolute monster' by pundit and former United star Owen Hargreaves after sharp reaction to palm away an effort from Manu Trigueros on the hour mark. He kept his side in the game before Ronaldo and Sancho secured the crucial away win to book their spot in the next round. He was vital. 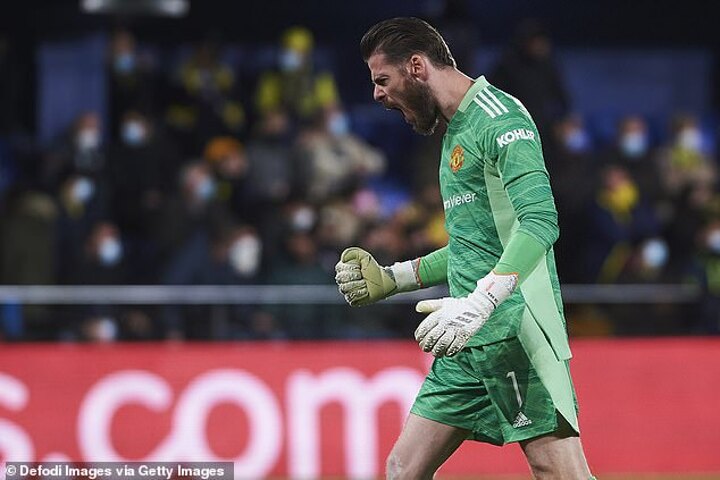 The Chelsea full-back is almost becoming an attacking player for Thomas Tuchel - and at least finishes like one after his superbly taken finish against Juventus.

James has been in irresistible form for the Blues this season and carried that into Europe this week after his man of the match display that saw him chest down a ball before rifling past Woijech Szczeszny.

He patrolled the right flank superbly in the 4-0 hammering and now has five goals and five assists this season and is becoming ever more influential at Stamford Bridge. 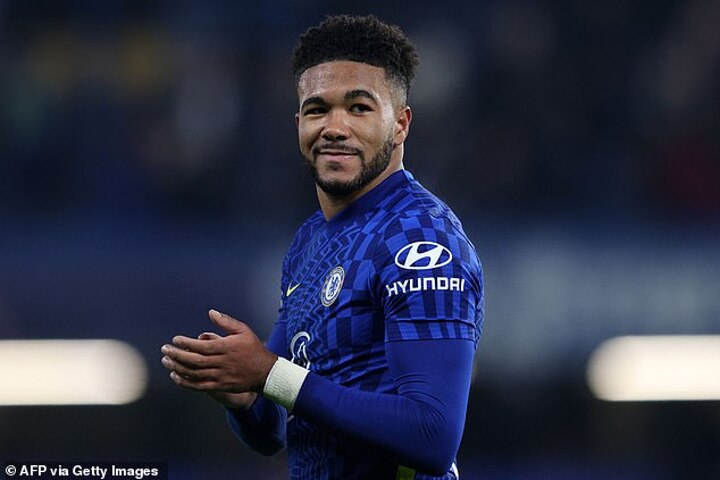 What a season the 22-year-old is having. He's started six times in the Premier League to help his side cruise to the top of the table and has now scored on his Champions League debut - and not a bad opponent to make your mark against.

The centre-back had his hands full up against Alvaro Morata and Federico Chiesa  and more than handled himself to secure a clean sheet and rounded off a solid display by slotting home on the half volley to set Chelsea on their way.

He now has three goals for the season and is doing his chances no harm as he battles to fight it out with Chelsea's top defenders for a place in the team. Looks a key part of the club's future now. 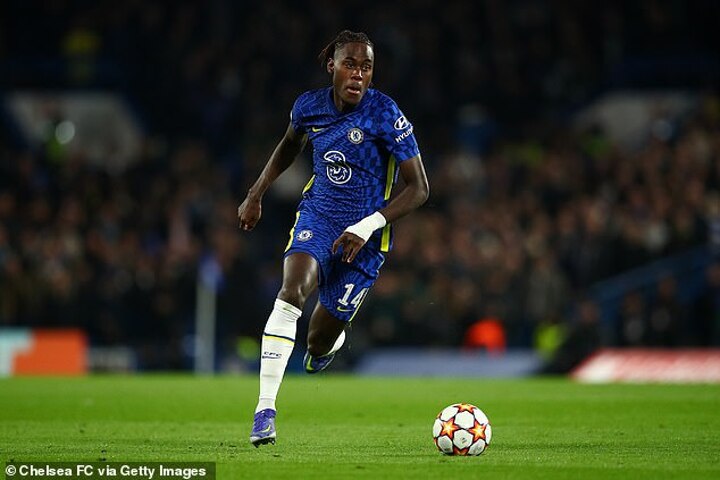 Chelsea score four and three of their defenders are in the team of the week? The Blues were superb up top but their performance would not have been complete without their solid foundation at the back, and while James and Chalobah both got on the scoresheet, Silva was crucial in ensuring none went in at the other end.

The Brazilian made a fantastic goal-line clearance when Morata's effort was destined to bounce into an empty net, as he raced back to acrobatically thump the ball away from danger as it was about to cross the line.

Silva's experience was so important in helping Chelsea win the Champions League last season and that will be a big factor coming into play as they look to retain their crown while also scooping the Premier League. 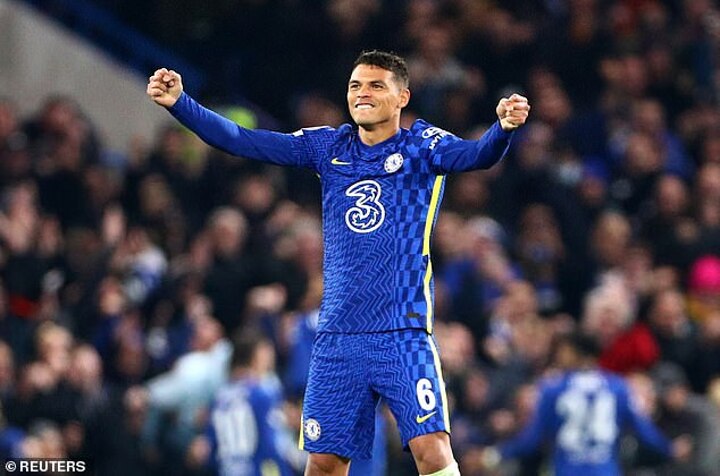 It was an outstanding performance from the Croatia star, who is enjoying a really impressive season for the Italian giants. He grabbed an assist in his side's 2-0 win against Shakhtar Donestsk to set up Edin Dzeko's second goal.

He now has three for club and country this term - as well as five goals, and he's showing his club exactly why they should offer him a new deal, with his current one expiring at the end of the season.

Perisic - who was also heavily involved in the first goal for Dzeko - is 32 but still has plenty more to give after also starring briefly for his country at the European Championships this summer. 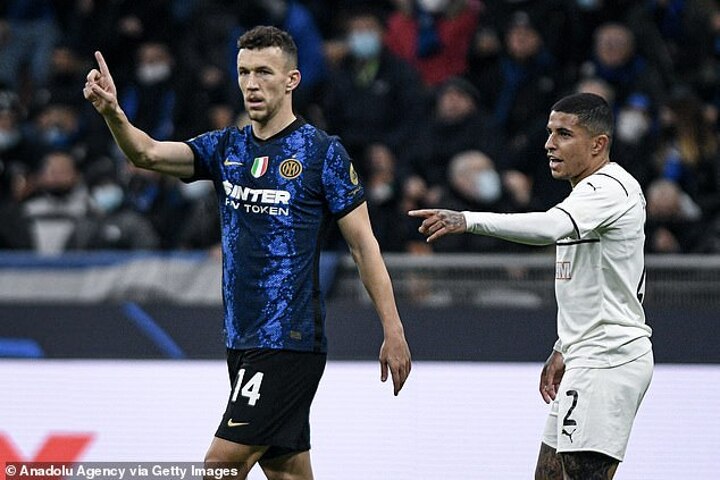 The Spanish midfielder may not have made the quickest start to life at Anfield but he is gradually producing more and more quality and certainly gave us a glimpse of what he is truly capable of in Liverpool's 2-0 win over Porto.

It was an absolute screamer from the former Bayern Munich star as he let rip from about 30 yards out to smash a howitzer than zipped all the way along the turf and lashing into the bottom right hand corner. Porto's keeper Diogo Costa was given no chance whatsoever.

He was arguably the Reds' best performer of the night with an 86 per cent pass success rate and setting the tempo for Jurgen Klopp's men before being withdrawn on 63 minutes, possibly to keep him fresh for the home clash against Southampton. 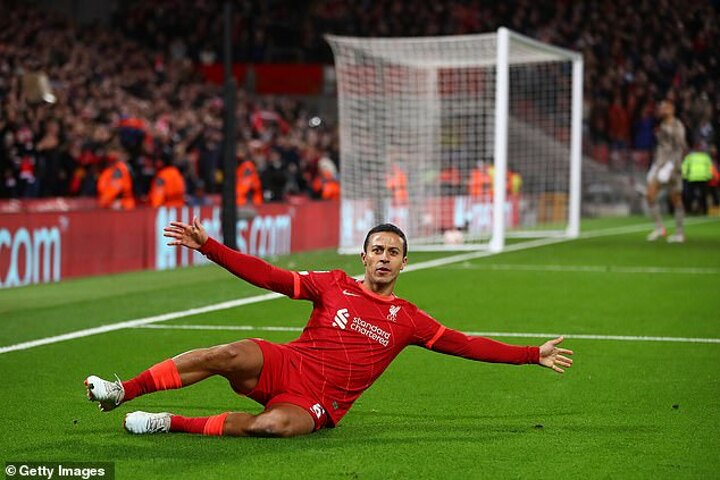 You could say Carlo Ancelotti's men were in Kroos control against Sheriff Tiraspol as their German playmaker ran the show. He not only got on the scoresheet, but totally dictated proceedings, completing 112 out of his 117 passes and making eight ball recoveries throughout.

He added a second goal against the Moldovan minnows, finishing off a superb passing move to ping a ball into the top corner - ricocheting off the crossbar and in, with goal-line technology ruling it had indeed crossed the line. It was superb technique from the 2014 World Cup winner.

It was his second goal in three games, and rounded off a brilliant run of games after he secured a man of the match display in their 4-1 win over Granada last time out. World class central midfielder who keeps performing at the top. 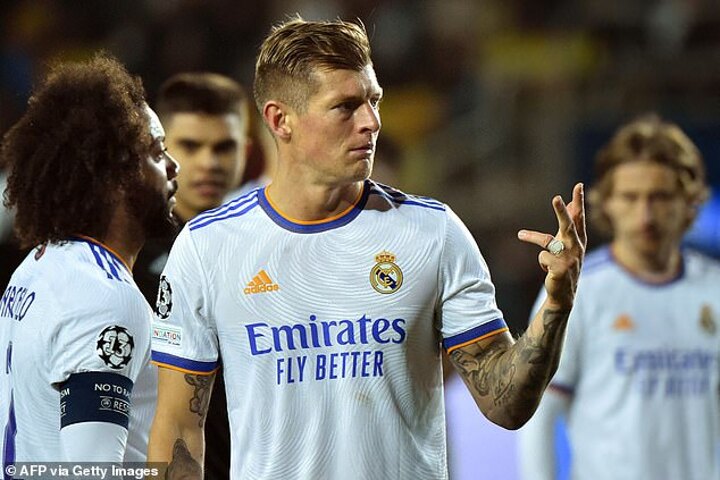 It would have been criminal to leave out the Frenchman. He has been in electric form this season, and was a huge part of Leipzig's 5-0 thrashing of Club Brugge.

He grabbed a brace and an assist too - with his record now standing at 13 goals and four assists for the campaign. His first of the game was simple enough - tapping home from a rebound to open the scoring, and wrapped up the win by having the final say - smashing into the corner after some pinball in the box.

Earlier he had set up Emile Forsberg's second goal and it was an all-round super display from the midfielder. Surely he'll have some serious interest at the end of the current season. 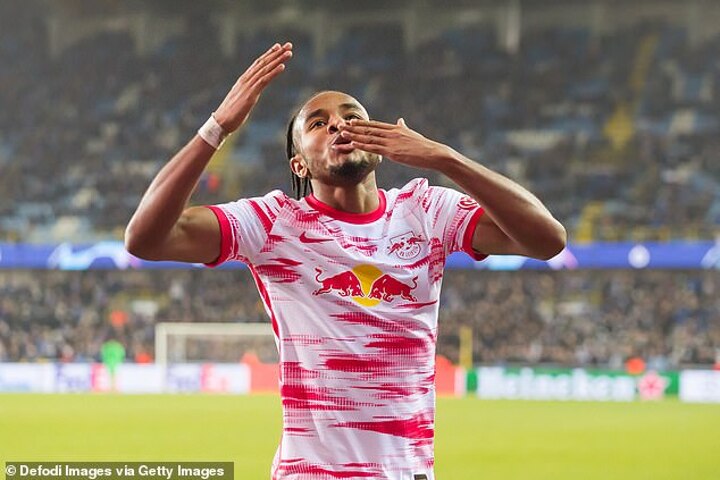 Forsberg was arguably even better than Nkunku after slotting home the penalty to make it 2-0, before his superbly taken rifled finish into the bottom left corner for the fourth goal.

Everything went through the Swede, and he was named man of the match for his efforts - having ensured his side were rampant and four goals up at the break.

His energy and flair made it hard to take your eye off him as he connected brilliantly with his team-mates to make it a tough day for the Belgians. 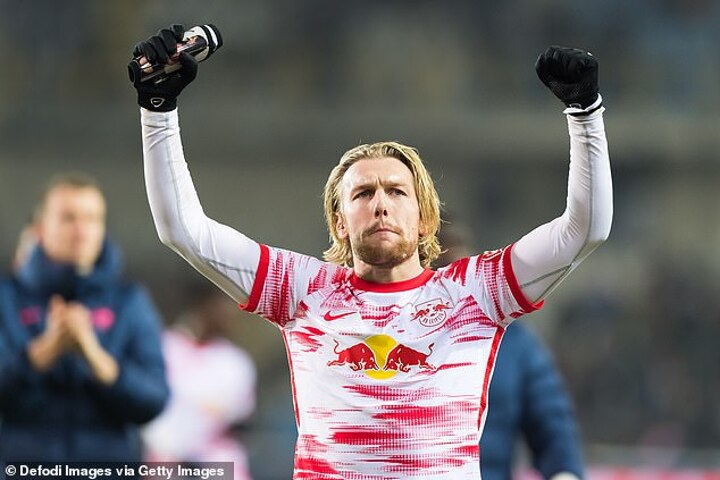 Remember this former West Ham striker? He didn't fare too well at the London Stadium, but is showing Hammers fans what could have been after a clinical showing up front for Ajax this term.

And he was at his ruthless best to score both goals in the 2-0 win over Besiktas in the second half - making it four goals in his last two.

Incredibly, he now has 18 from 19 games overall - with nine in the Eredivisie and nine in the Champions League - making him by far the top scorer. Was it a mistake to let him leave the London Stadium? 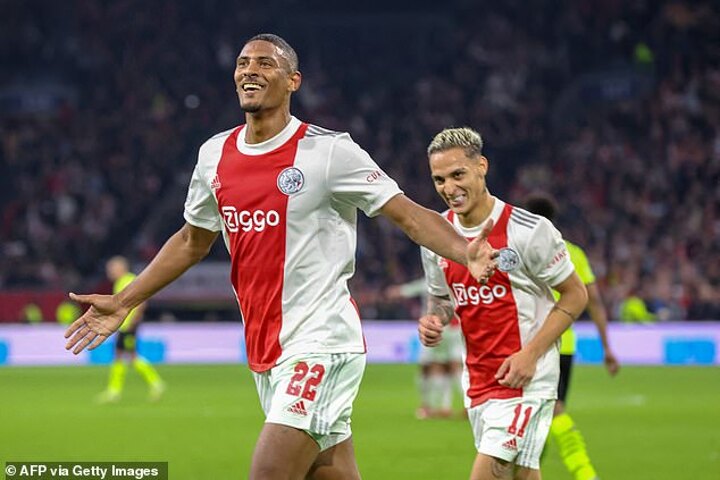 Even at the age of 35, the big Bosnian is still at it after he followed Forsberg and Haller in firing in a brace this week.

The former Manchester City striker seems to be a huge goal threat everywhere he goes and had a big task to replace Romelu Lukaku at Inter Milan. But he's wasted no time getting to grips with life at the San Siro - netting his tenth goal in the Italian capital already.

His first came outside the box as he thumped home following a goalmouth scramble, before pouncing from close range to head into the net from Perisic's cross. 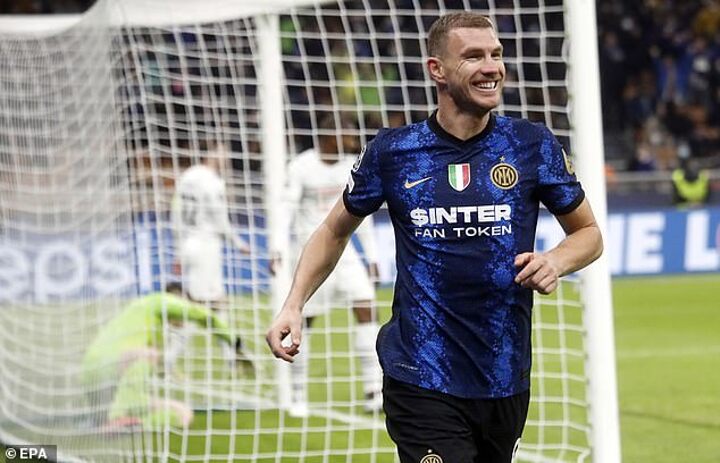 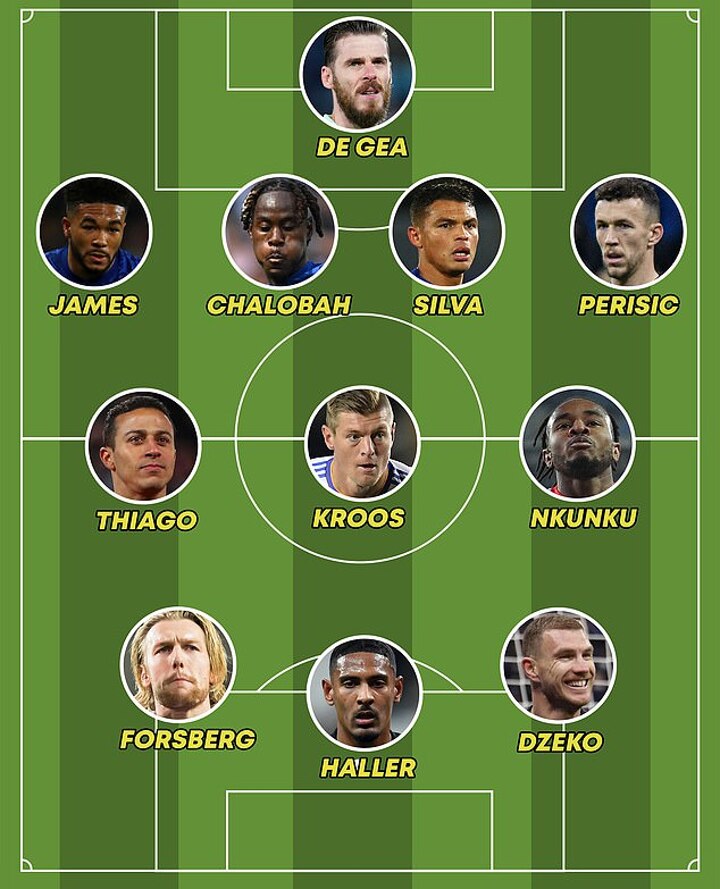