Luis Enrique delivered effusive praise for veteran Sergio Busquets after he won Player of the Nations League Finals award, despite Spain's defeat by France in the final. 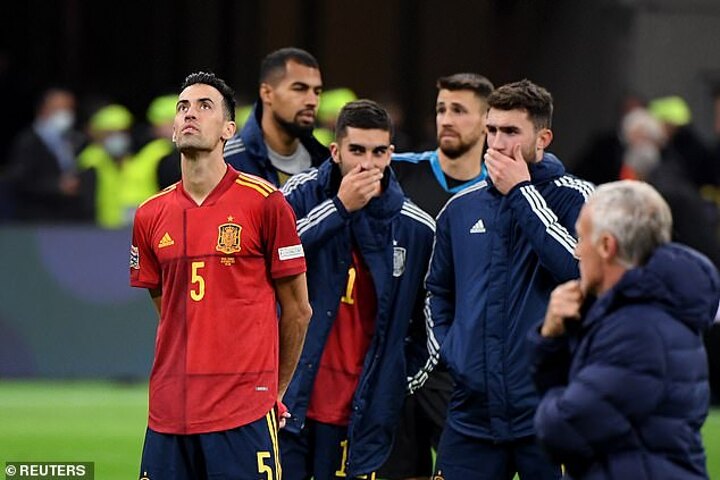 'He's vital for us. He's the captain, but not only that,' Enrique said during his post-match press conference.

'He's also somebody who gives some values off the pitch and on the pitch. He gives you calmness, quietness. He's our pillar on which our defensive and attacking game are based.' 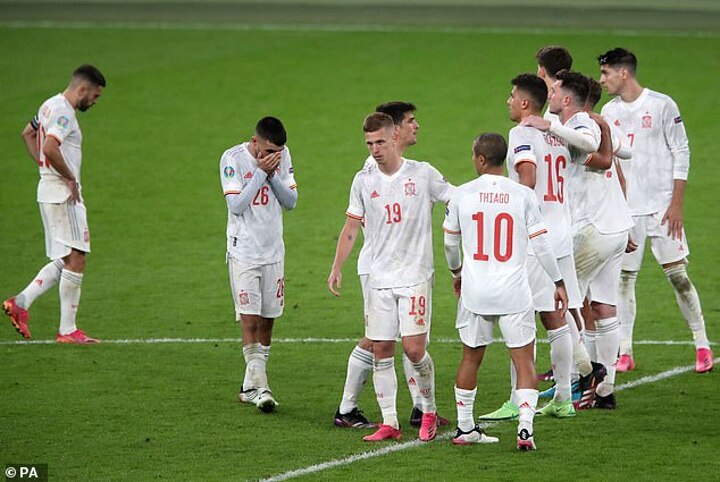 It was a major statement from the Spain boss for a player who is enjoying rather contrasting fortunes at club level with Barcelona.

His experience is undeniable but - along with Chelsea defenders Marcos Alonso and Cesar Azpilicueta - he was the only player above the age of 30 named in the starting XI to face Didier Deschamps' side in Milan.

And despite Busquets' impressive performances for La Roja in recent games, his anchoring role has not been the talk of the town when it comes to dissecting Enrique's men.

Among that starting XI against France were six players aged 25 or below, with a further eight stars in that category taking a place on the bench.

Similarly, there were six players below the age of 25 in the starting XI of the Euro 2020 semi-final defeat by Italy too.

It demonstrates the rebuild 51-year-old Enrique is currently overseeing as Spain seek to assemble a side capable of returning the country to its glory years of around a decade ago. 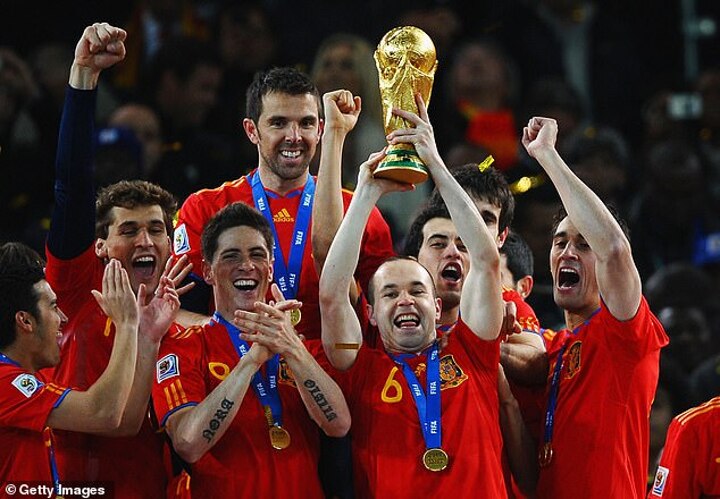 Back-to-back Euros wins either side of the 2010 World Cup was an unprecedented era in Spanish football. By comparison, a Euros semi-final loss and Nations League final defeat is a mere footnote when it comes to results achieved by the team in the 21st century.

The task the former Barcelona boss is therefore facing is an unenviable one, but there is a much greater project at work here which could elevate that footnote to being one of the most crucial stages in the nation's recent footballing history.

Spain swapped the chopping and changing at managerial level - which has seen four managers including Enrique appointed since Vicente del Bosque's retirement in 2016 - with constant alterations among the playing staff in recent years.

In Enrique's first Spain squad of 2019, Kepa Arrizabalaga, Jesus Navas, Dani Ceballos, Rodrigo Moreno and Iker Muniain were all named in the squad, with the latter returning to the fold after a seven-year absence.

Navas and Rodrigo are now in their 30s, while the likes of Kepa and Ceballos do not look like returning to regular action at club level any time soon, forget on the international scene. 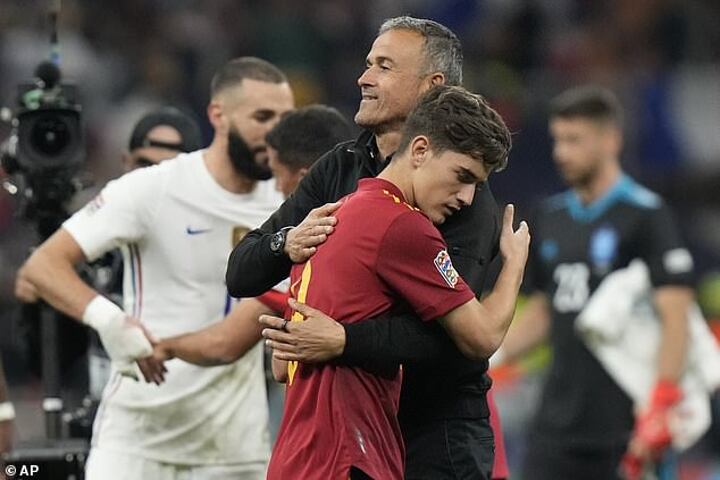 But in their place are a set of youngsters who are bringing genuine optimism to the table, and they are not playing just bit-part roles either.

Perhaps the most surprising call-up for this international break was 17-year-old Gavi, which even led Enrique to admitting him joining up with the nation's senior squad could have been premature.

'I have no doubt that Gavi will be important,' Enrique said ahead of the Nations League finals.

'Maybe I have called him early, but age doesn't matter. He's more than ready. I like what I see and I want to know if he can adapt to our play.'

On Wednesday, he became the youngest ever Spanish man to play for his country at 17 years, 62 days, having played just 364 minutes in his entire senior Barcelona career before then.

But soon enough against a vibrant home Italian crowd, it became immediately evident just why Enrique had publicly backed him with such confidence. 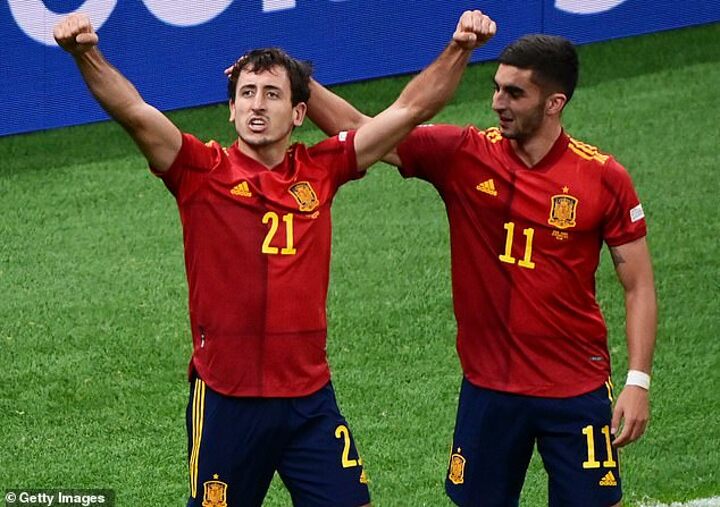 There was an incredible conviction about Gavi's performance in an advanced midfield position, and a wonderful turn which won a free-kick against France saw him draw comparisons with Andres Iniesta from Jamie Redknapp.

'He has personality, bravery, quality, football to play at this level and on top of it all he's physically superb,' Enrique said after the game.

'He had to mark [Marco] Verratti, who they have just told me was his idol, and he was more than up to the task. It's absolutely not normal to see a player with his personality.

'He has the typical profile that fits our system. He can move between the lines, play, deliver the last pass, he doesn't lose the ball. He's not just the future of the national team; fortunately, he's also the present.'

But the 17-year-old and Yeremi Pino - a year his senior and who also impressed against Italy with his direct runs which have brought Villarreal fans to their feet over the last couple of campaigns - are just the latest talents off the conveyor belt that have been introduced to the national team set-up. 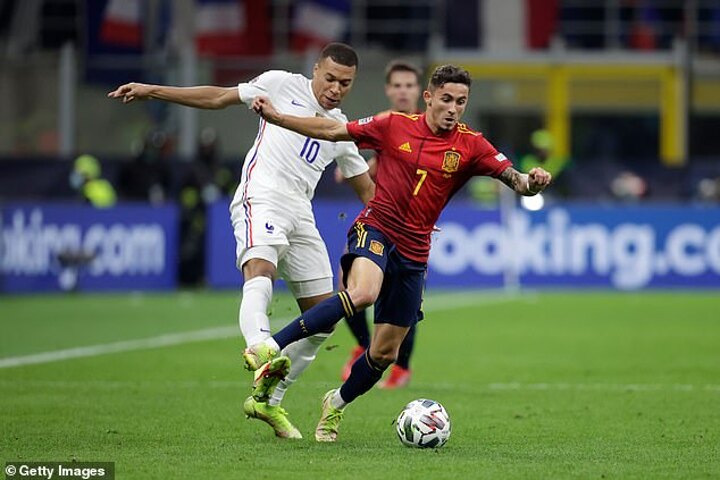 While Gavi was shining in midfield, Ferran Torres, 21, was scoring the two goals in the first half which saw Spain reach the Nations League final.

His first goal in particular was a gem and showed the true striker's instinct both Enrique and Pep Guardiola at Manchester City are extracting from him, beautifully guiding home a cross following a perfectly-timed run into the area.

He now has seven goals for club and country this term and while he may have been left out of City's last few Premier League matches, Spain will hope there is now another striker in the David Villa mould emerging.

And what better for fans hoping for such an outcome than praise for the man he could now look to emulate.

'Not just now, he already was when he was playing at Valencia. He has power, speed, shooting off both feet, long shots. And at his age…'

Meanwhile, that cross for his first against Italy was delivered by 24-year-old Real Sociedad star Mikel Oyarzabal, who has also been in excellent form for his club. 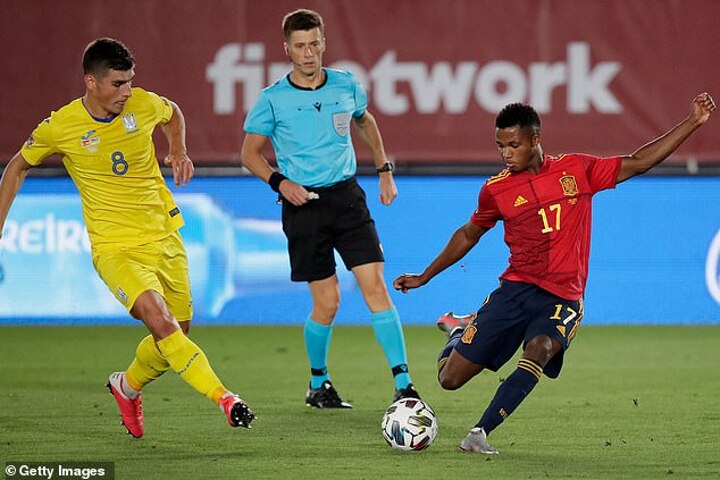 He has netted six goals in eight LaLiga games and now represents one of Spain's most versatile and technically gifted forwards, without ever having really pulled up any trees.

He certainly appeared to do that by adding to his two assists against Italy with a drilled finish past Hugo Lloris to give Spain the lead in the Nations League final, but a goal return last season of 11 goals in 33 games is hardly going to have Real Madrid or Barcelona swirling around him like vultures.

But 70 goals in 250 appearances for the Basque side is nothing to scoff at, and although some suggest he faces a critical decision as to whether the summer is the perfect time to move on, his current team sit third in LaLiga and a league title challenge is not entirely out of question in the next couple of seasons with the right additions.

And in any case, it is perhaps that understated quality - for the time being at least - that makes him a perfect addition for a squad that does not yet contain a clear standout in a similar vein to Villa and Fernando Torres before them.

Ansu Fati - the youngest ever player to score for Barcelona and for Spain - will surely come back into the frame sooner rather than later after injury cruelly robbed him of further development for the best part of 12 months.

His goalscoring return for the Catalan giants against Levante last month certainly raised spirits, and at the age of 18 he is no doubt going to be competing with Oyarzabal and Ferran Torres for a place in that front three. 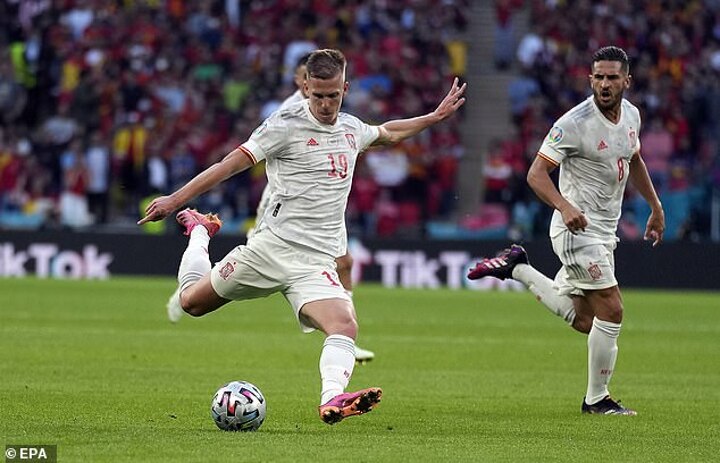 Similarly, Dani Olmo has had plenty of trust placed in him by Enrique, starring with three assists in Spain's run to the semi-finals of the Euros and later being named in their squad for the Olympics in the summer.

And surely a thigh injury was the only obstacle which could - and did - prevent the 23-year-old from joining up with his international team-mates this time around, while Tottenham's Bryan Gil, 20, is another man Enrique has his eye on after naming him as injured Marcos Llorente's replacement in his latest squad.

But it is not solely in attack where Spain are looking to the future with their selections.

Midfielder Pedri, 18, was another Spaniard who was included for the Euros and Tokyo Games this year - playing an incredible 73 games altogether for club and country in the process last season - and another who has missed out due to an injury.

It demonstrates the sort of endurance that has kept Busquets going so long, but Spain seem to have a ready-made replacement for him when he does call it a day in the form of City midfielder Rodri, 24. 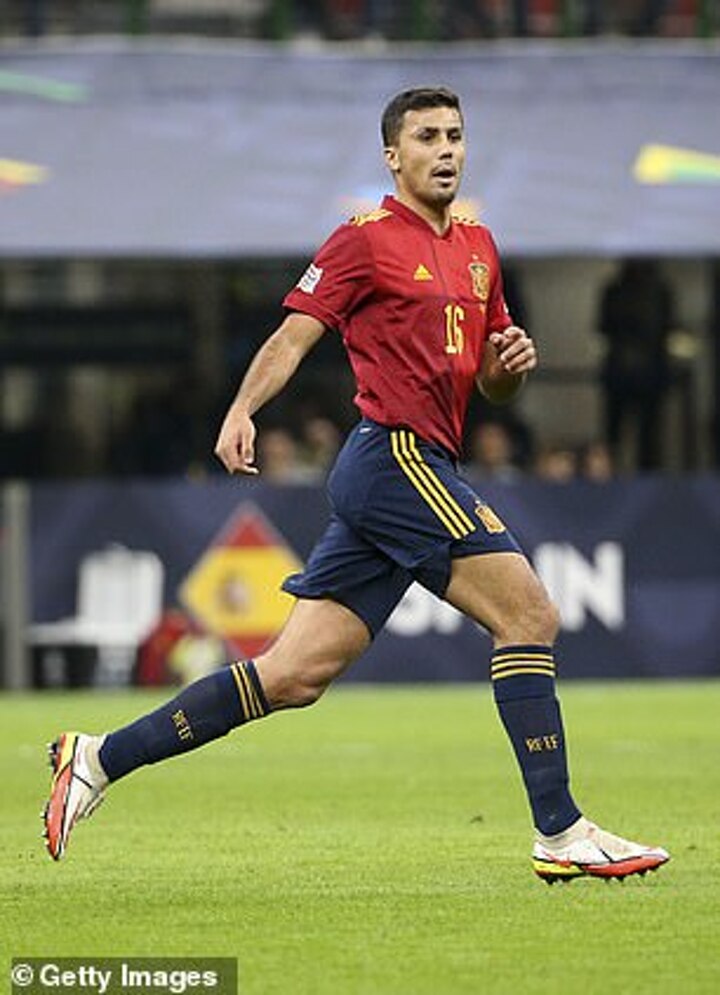 In defence, Manchester United goalkeeper David de Gea has been in excellent form for his club this season but continues to be ousted by Athletic Bilbao shot-stopper Unai Simon at national team level, despite enduring a mixed Euros with some high-profile errors.

But Enrique's backing of the 24-year-old has been unwavering, insisting he had the faith he would deliver the saves necessary to help beat Switzerland on penalties in their Euro 2020 quarter-final.

In front of Simon in recent matches has been Barcelona and former City centre-back Eric Garcia, who will soon hit 100 professional senior career performances at the age of 20.

Aymeric Laporte at 27 provides the experience in that area, but Pau Torres is viewed as the perfect rising commanding central defender in Spain having established himself as one of Europe's most promising centre backs over the past two seasons.

Manchester United were sniffing around before the opted to sign Raphael Varane instead in the summer, but a move to a more high-profile club appears to be a matter of when, not if.

The biggest compliment you can pay to the current incumbents in Spain's defence is that while the Spanish media have made claims of 'injustice' after Mbappe's controversial winner, there has not been a single peep about wanting Sergio Ramos to return to help steer the ship at the back once he returns from injury. 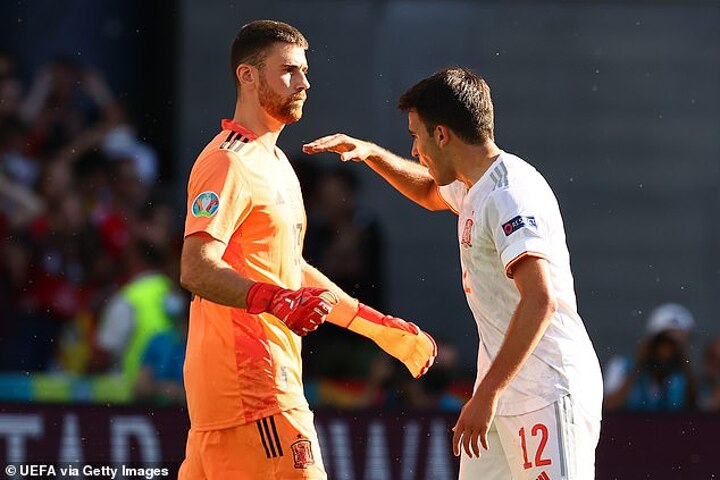 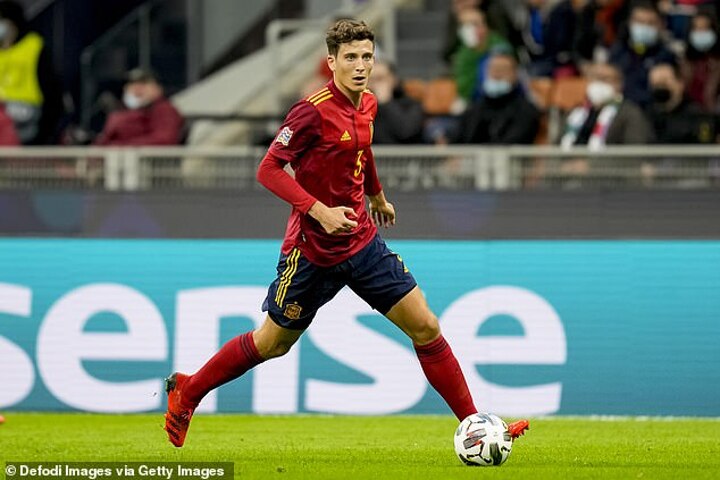 'I clearly believe that it is a decision that seeks the best for the group,' Enrique said about Ramos following his exclusion from the Euro 2020 squad after his final and injury-hit season at Real Madrid.

'It is not easy to convey something that is not positive for him. I have to stick to what is best for the team.'

And it appears that with a young squad at his disposal that has already experienced a semi-final and final, Enrique has done just that.

Whether the potential will develop sufficiently to almost guarantee Spain emerging as genuine contenders for next year's World Cup very much remains up for debate.

But the formula and blueprint to compete at Qatar 2022 has very much been set in motion, and right now the elements involved in the process are justifiably bringing more joy than despair. 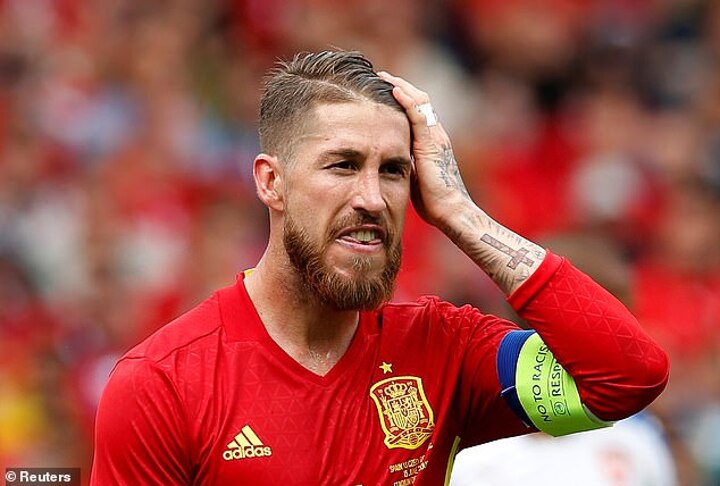