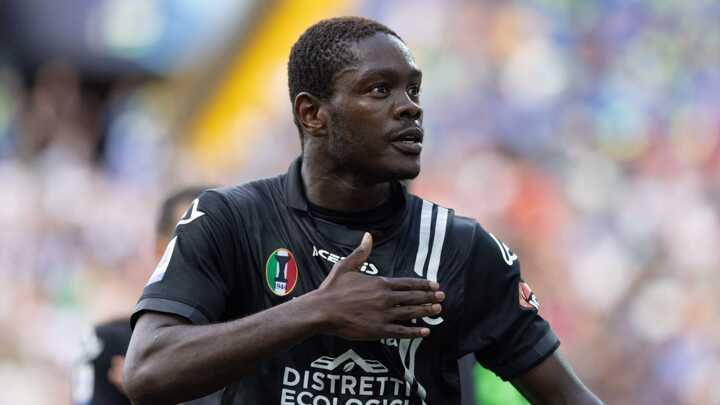 Emmanuel Gyasi was among the scorers as Spezia secured a 3-2 comeback win over Udinese in Saturday’s Serie A encounter.

Having lost their last four league matches (against (Inter Milan, Torino, Lazio and Atalanta), the Little Eagles travelled to Stadio Friuli – with the aim of returning to winning ways.

That aim was achieved as they picked their 10th victory of the 2021-22 Italian Serie A campaign.

Still fresh from their 1-1 away draw at Sassuolo, the White and Black took the lead after 19 minutes as Nahuel Molina rifled Destiny Udogie’s assist past goalkeeper Ivan Provedel.

However, the visiting side restored parity 10 minutes before the half time break as Daniele Verde smashed Salvador Ferrer’s pass past Marco Silvestri.

In the goal-laden first half, Thiago Motta’s men took the lead thanks to Ghana international Gyasi, who took a snapshot after profiting from Ferrer’s second assist.

Things got worse for Udinese two minutes into the second half as Giulio Maggiore drilled home a low shot.

Although chances were few, Rey Manaj had the opportunity to make scores 4-1 from the penalty spot but blasted over the crossbar.

Defender Pablo Mari scored Spezia’s second goal for Gabriele Cioffi’s side after making the most of Gerard Deulofeu’s assist.

Gyasi - who has now scored six goals in the 2021-22 campaign – was subbed off for Atalanta loanee Viktor Kovalenko with six minutes left on the clock.

Meanwhile, Morocco's Mehdi Bourabia, Angola’s M'Bala Nzola, and Gambia’s Ebrima Colley were not dressed for action against the hosts.

On the other side, Italy youth international of Nigerian background Udogie was handed a place in the starting XI but was replaced by Brandon Soppy with 14 minutes left on the clock.

As expected, Nigeria international was not listed for the five-goal thriller due to an injury suffered against Inter Milan.

Victory moves Spezia seven points clear of the relegation zone, assuring their Serie A safety ahead of the final league game next Sunday versus Napoli.

Meanwhile, defeat for Udinese confirms a bottom-half finish, yet a win against relegation-threatened Salernitana next week would help them achieve their best points tally in nine seasons.