As recently as 18 months ago, when Carlo Ancelotti took the reins and the likes of James Rodriguez and Allan signed on at Goodison Park, Everton retained their status as the biggest club, or at least the club with the biggest potential, outside the ‘Big Six’. 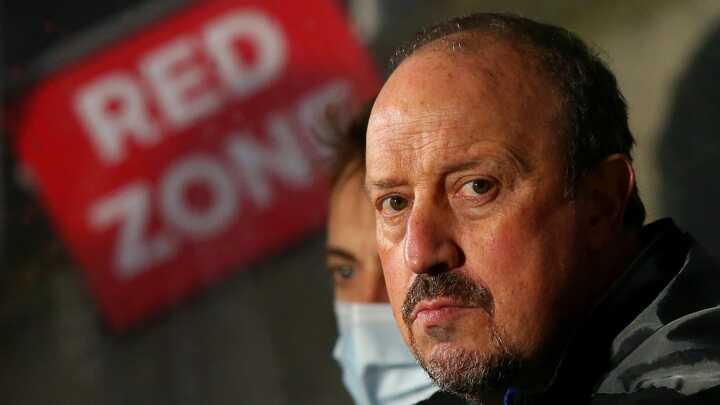 The speed with which their reputation has declined is remarkable.

This week, as Lucas Digne joins Philippe Coutinho at Aston Villa and a Steven Gerrard outcast, Anwar El Ghazi, finalises a move to Everton, Villa have proved they sit emphatically above the Toffees in the pecking order.

There are numerous reasons for the farce developing at Everton; numerous people to blame for years of mismanagement.

However, appointing Rafael Benitez was arguably the crowning moment of failure, a move that disrespected the Everton supporters and entirely misunderstood the tactical and psychological realities of Premier League management in the modern game.

Perception is vital in football. The lure of Gerrard, an exciting young manager, brings a player like Coutinho to Villa. By contrast, Everton have a coach seen as negative, defensive, and entirely outdated.

Progressive football is mandatory in the top half of the Premier League. It is the only way to get fans to believe in and support the project – and the same goes for players (Everton’s must wonder how on earth Benitez plans to improve a record of nine points from the last 14 league games).

Motivation becomes an issue when the method is so dull and uninspiring, when the cautiousness of the tactical system betrays a manager’s anxiety and lack of trust.

Football needs to be played with puffed out chests, not meekness, not camped in your own half waiting for chances to break.

That is the basis of the Benitez approach, which worked during the attritional warfare of the 2000s – when Benitez and Jose Mourinho set the standard – but is no longer relevant in an age of hard pressing and build-up play coached in immaculate detail on the training pitch.

Benitez is one of the last of a dying breed. He works on defensive shape from a low block, unheard of these days in the top half, and he expects his players to largely improvise on the counterattack when those around him (including Gerrard) are coaching specific set-pieces in open play, through rote learning.

The statistics are a damning indictment of his ideas.

Everton sit third-bottom for average possession (39.2%). They have the joint-second-most unsuccessful touches (17.4 per game), just ahead of Newcastle United. They hit the fourth-most inaccurate long balls (35.7 per game). They have the third-highest PPDA (15.36), behind Newcastle and Norwich City.

This all points to an approach built on an ultra-defensive shape as Everton concede territory and wait for long-ball counterattacking opportunities.

It is a tactical system that might work when scraping points towards the bottom, such as when Benitez was Newcastle United manager, but it cannot at Everton.

It certainly didn't at Inter, Chelsea, Napoli, or Real Madrid, as there is a reason nobody with European ambition plays like that these days.

Even the game’s most successful reactive tacticians, Diego Simeone being the obvious one, have had to adapt to deploying a higher line and working on their possession structure. The Benitez way, the Mourinho way, just does not work anymore.

First, a focus on individualism and simple attacking patterns is too reliant on the whims of confidence.

It limits Everton’s creative output, and therefore when one key player is injured or out of form the whole system falls apart – which explains the dreadful performances whenever Richarlison or Dominic Calvert-Lewin are absent.

Who knows how bad it would get if Demarai Gray had a spell on the sidelines? Of the 23 league goals Everton have scored this season, eight have resulted directly from a piece of brilliance from Gray.

A further seven have come from set-pieces (first or second phase) and four have been from a long punt up the pitch. Only four goals (17 per cent) don’t fit into one of these three categories.

Second, the psychological toll of inviting pressure breeds low self-esteem. That explains the defensive errors piling up; a Michael Keane error is responsible for eight of the 32 league goals they have conceded, and set-pieces another 10.

A further four have come directly from sloppy concessions of the ball in their own third, which tells its own story.

Everton are too deep to pass out in an age of high pressing, and teams can quite easily keep them pinned back and/or win the ball in a dangerous area. That, alone, is evidence modern football has moved beyond Benitez.

A change of manager would not fix everything, especially not while Everton’s transfer strategy remains so confused.

But when you see the immediate lift Villa got from hiring Gerrard, and the way it has changed perceptions of the club among top players, it is certainly the first step on the road to recovery.

Graham Potter, whose Brighton play a brand of expansive and organised possession football that shows he has the potential to be an elite coach, would be a savvy choice.

Potter’s team stamp their authority where Everton timidly play the percentages; they have a calculated plan for how to progress into the final third, insulating them against dips in confidence, whereas Everton rely on Gray coming up with a moment of magic.

Most important of all, appointing Potter or a similarly progressive coach would give the supporters something to believe in again.

The excitement at Villa Park is infectious; it spreads from manager to players to fans, and tactics aside this should not be underestimated as a tangible force in the rebuilding of a club.

Everton fans, after a tedious 2021-22 campaign and four years without European football, deserve a little hope.