Mikel Arteta has a big call to make as he looks to lift the curse of the captain's armband at Arsenal. 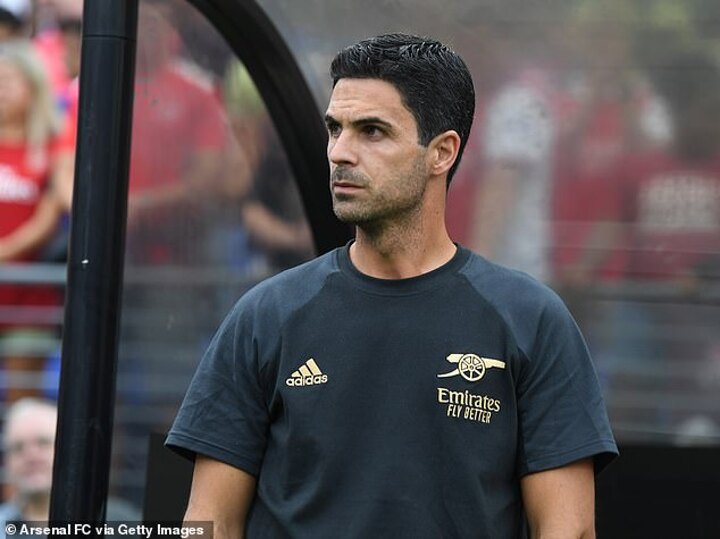 Since Thierry Henry left the club as captain in 2007, it has been a catalogue of captaincy calamity that has left Arsenal fans crying out for the club to find someone to take them back to the glory days of Tony Adams and Patrick Vieira.

Last season, there were a number of players to wear the armband after Pierre-Emerick Aubameyang followed the likes of William Gallas and Granit Xhaka to have the captaincy taken away from them.

Others received the honour and then forced through a move to a rival club, or Barcelona, and enjoyed more success elsewhere. Others seemed to get stricken down by injury as soon as they received the armband.

There was also Unai Emery's five-man leadership group which went down in flames.

Sportsmail takes a look at the options to take on the captain's armband for the forthcoming season, and what has gone wrong for those who have taken on the responsibility over the last 15 years. 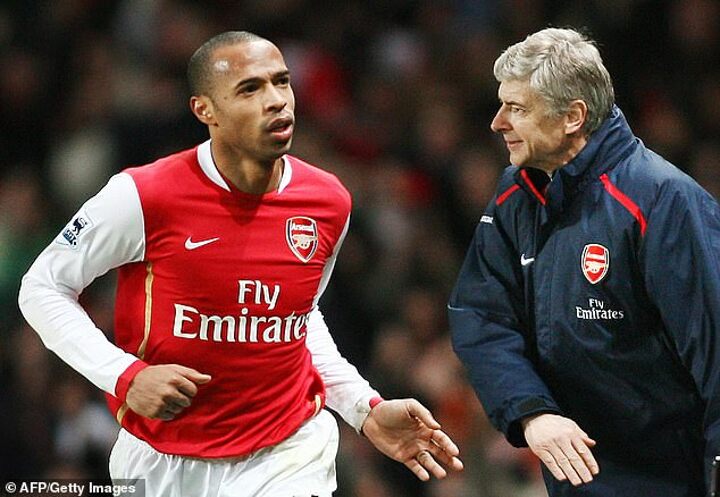 Martin Odegaard is the overwhelming favourite to take on the captain's armband after taking up the role towards the end of last season.

It would be a surprise if he is not handed the armband after his impressive displays last season and also captaining the Gunners in the first match of their US tour against Everton.

Arteta has been particularly complimentary about Odegaard's attitude - something which he has stressed the importance of after a string of controversies surrounding recent captains.

He said: 'Martin has a lot of qualities that we want as a captain… one of them is that he thinks about the team before himself. 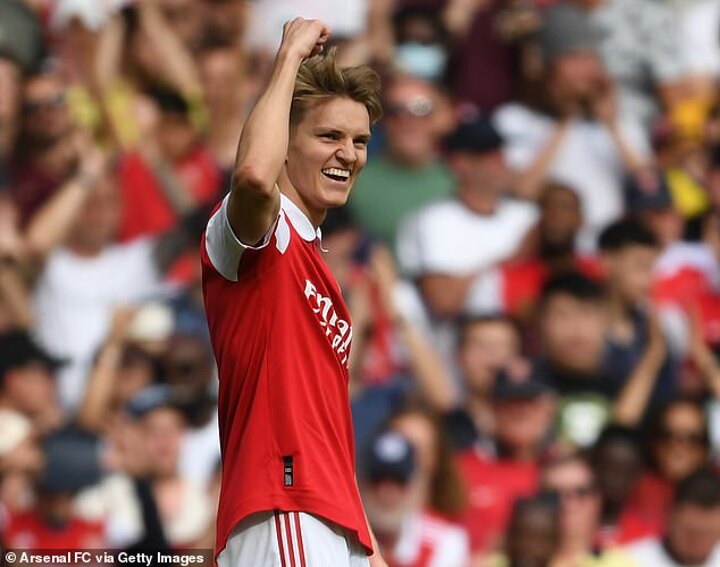 Odegaard organises his team-mates but is not the most vocal player, and it will be a big task for him to overcome the poisoned chalice that seems to be the captain's armband.

If Arteta was to look elsewhere then Kieran Tierney would be the next best option.

Tierney at one point looked to be ahead of Odegaard in the pecking order when he was handed the armband in a win over Brentford back in February.

Arteta though seemed to make a U-turn and lean towards Odegaard. One potential issue for Tierney is his ability to stay fit after a number of injuries - missing the end of last season after undergoing knee surgery. 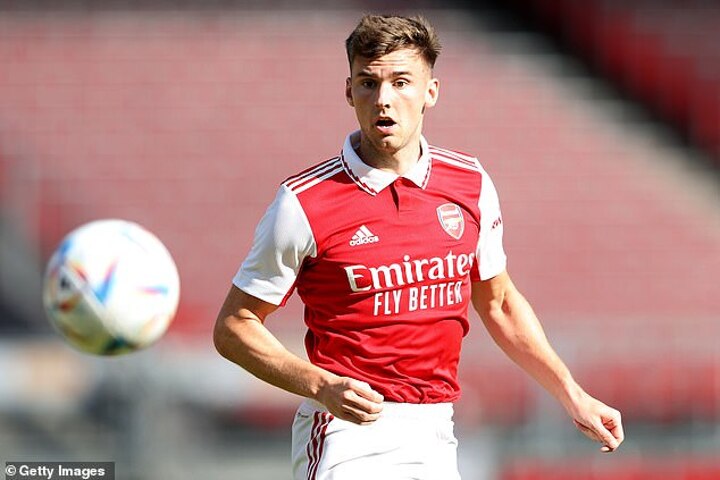 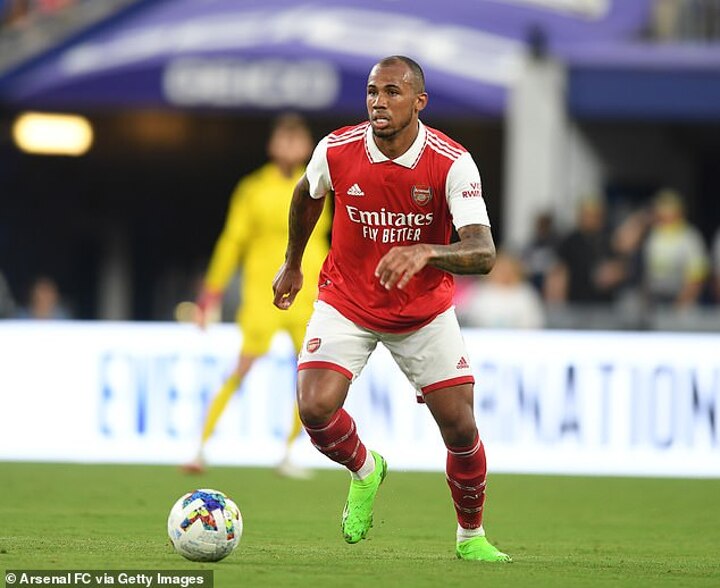 Aaron Ramsdale and defender Gabriel have shown plenty of character since their arrivals to the club.

Gabriel would have a case as he has been a commanding and reliable figure in Arsenal's defence.

He's been the leader of their defensive unit and can be regularly seen organising and cajoling his team-mates.

The England goalkeeper though could be too early into his career in north London.

Granit Xhaka would also be in contention if his last run with the armband didn't end in the sour manner it did.

Fans had major concerns when Gallas was picked as the successor to Thierry Henry, and they were proven right, when the French defender threw a wobbly after a 2-2 draw at Birmingham in February 2008.

In a lively and heated match, striker Eduardo had his leg broken following a tackle by Martin Taylor, while James McFadden converted a late penalty conceded by Gael Clichy to see Arsenal drop two valuable points and dent their title hopes.

When the penalty was awarded, Gallas walked into the Birmingham half in apparent protest, kicked advertising hoardings in fury when the ball rustled the back of the net and after the final whistle, simply sat in the centre-circle in a sulk until manager Arsene Wenger came to retrieve him.

Team-mate Jens Lehmann later recalled:  'After the match, he refused to leave the pitch and sat down in the centre circle like a sulky child.

'In the dressing room, Gallas came to blows with Gilberto Silva, who accused him of seeking attention in a daft manner. The row dragged on for the remainder of the season.'

He kept the captaincy until November where he then gave an interview in which he revealed tensions in the dressing room and criticised younger players for lacking the courage necessary to succeed.

Gallas left the club in 2010 after failing to come to terms with Arsenal on a new deal, and his relationship with supporters all but ended by making the controversial switch to join north London rivals Tottenham. There was no doubt about Fabregas' ability and there were moments of magic when he became Arsenal's second youngest ever captain at the age of 21.

However he was susceptible to injury lay-offs - almost immediately ruled out for four months with a knee injury after he was handed the armband.

By 2010, speculation was intensifying that he might return to boyhood club Barcelona.

As Arsenal laboured to a 2-2 draw with Fulham on the final day of the 2010-11 season, Fabregas angered supporters by tweeting a picture from the Spanish Grand Prix.

He would ultimately seal his return to Barcelona, emulating Henry in being an Arsenal skipper who moved to the Nou Camp.

The Spaniard returned to the Premier League three years later where he would enjoy a more successful stint with Chelsea - winning two titles. 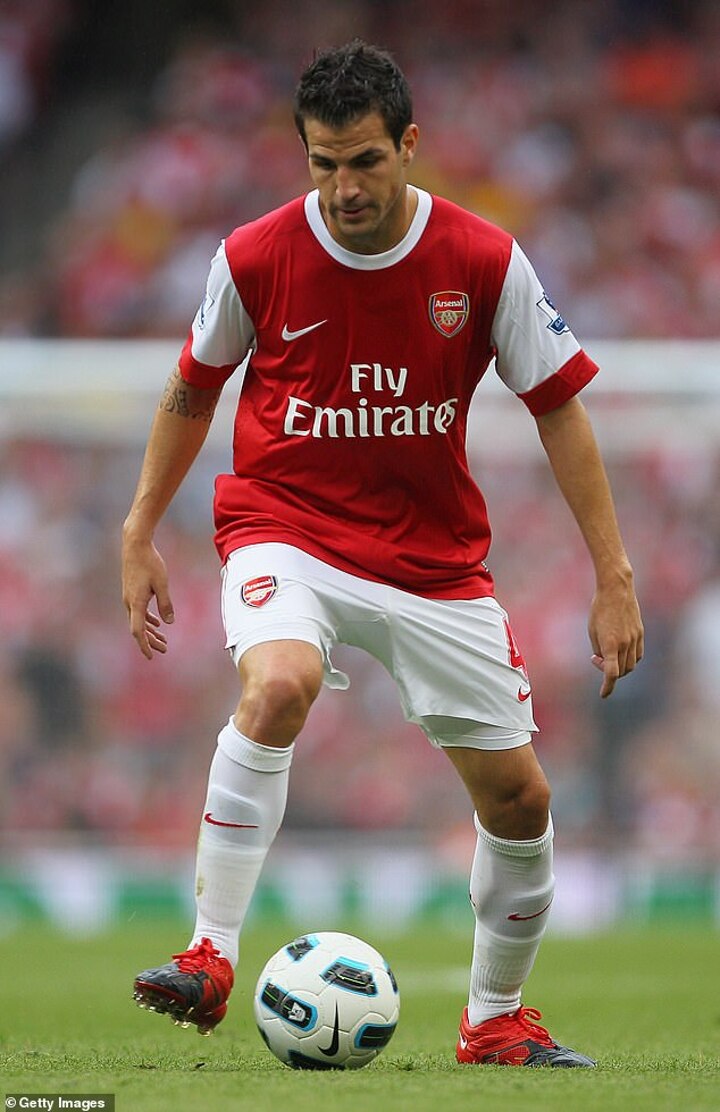 Like Fabregas, Van Persie was a fan favourite at the Gunners but went on to enjoy more success at one of their rivals.

Van Persie scored 37 goals in 48 matches in all competitions during the 2011-12 season, winning the Premier League Golden Boot in the process.

Arsenal could only finish third in the table and Van Persie had his sights sets on a winners' medal in England.

Rejecting a new Arsenal contract in July 2012, he moved to Manchester United for an initial £22.5million in August in a colossal blow for Arsene Wenger and his team.

'I always listen to the little boy inside of me in these situations - when you have to make the harder decisions in life. What does he want?' Van Persie later recalled.

'That boy was screaming for Man United. From my side, and Arsenal as well, there are no hard feelings.'

The fans probably didn't think the same but Van Persie was vindicated when another Golden Boot-winning haul delivered United the title in 2012-13. 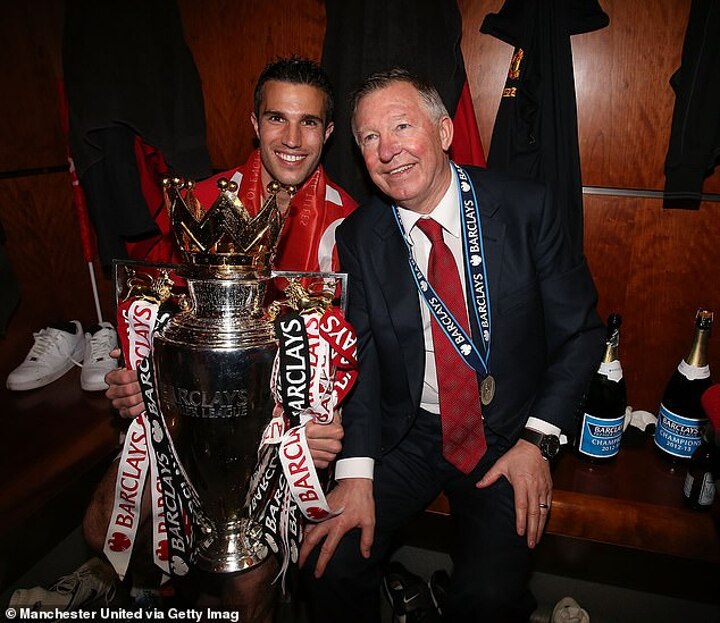 The Belgian defender seemed a safe pair of hands to replace Van Persie but he fell victim to the captain's injury curse which previously befell Fabregas.

Knee problems meant he could only play a bit-part role during the 2013-14 season, which was a shame because the fans always appreciated his effort.

By the time of the FA Cup win in 2014, Arsenal's first piece of silverware for nine long years, Vermaelen was no more than an unused substitute against Hull, with Mikel Arteta leading the team at Wembley.

And in a recurring theme, and despite all these injury issues, Vermaelen made a £15m move that summer to, you've guessed it, Barcelona. By the time the Spaniard was awarded captaincy, he was 32 and in the twilight of his playing career.

He made just 12 appearances in 2014-15 and and 14 the following season, as fitness issues and competition for midfield places kept him on the sidelines.

However, foreshadowing his current stint as manager, Arteta showed plenty of leadership off the field, helping younger players at the time such as Hector Bellerin feel at ease around the first-team group. 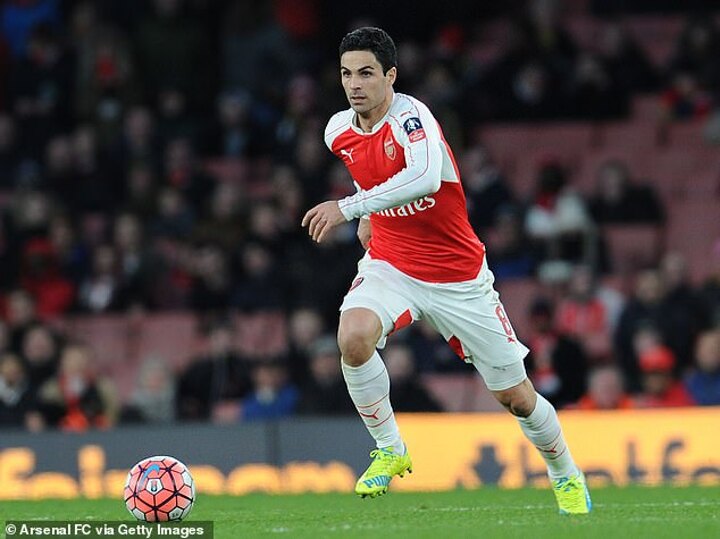 Mertesacker was appointed as captain despite the knowledge he would miss a large chunk of the following season with a knee injury.

It reflected the high esteem in which Wenger and everyone at Arsenal held the big German defender in.

He made just two appearances all season but one came in the FA Cup final win over Chelsea, allowing Mertesacker to lift a trophy as captain.

The defender recovered to make a few more outings in 2017-18 but his role as captain was more as club figurehead than on-pitch leader.

He now works behind the scenes for the Gunners as their academy manager. 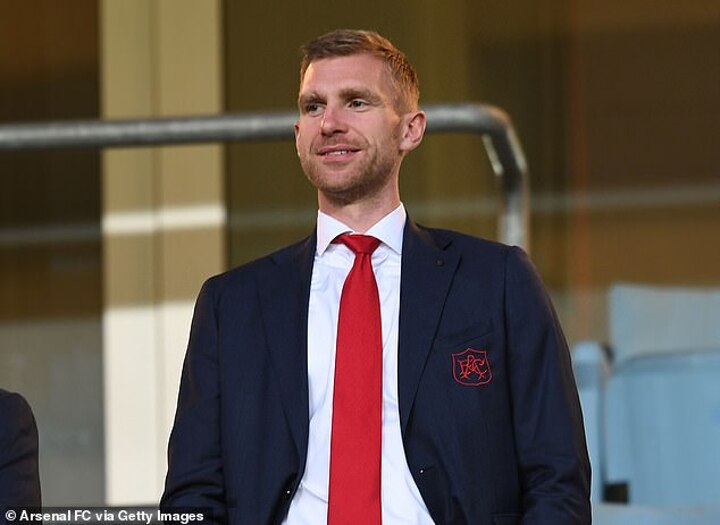 Laurent Koscielny was handed the captain's armband upon the arrival of Unai Emery, but the manager wanted to do things slightly differently.

Part of the reason for that was Koscielny missed most of the first half of the season with a Achilles tendon rupture.

The Frenchman did eventually return to the side but Arsenal could only finish fifth and were thrashed by Chelsea in the UEFA Europa League final.

Then, as has become familiar, everything went south with Koscielny refusing to travel on Arsenal's pre-season tour of the United States in order to force through a move to Bordeaux.

He was slammed by supporters and former players as 'disrespectful' after his announcement video for the French side involved him taking off his Arsenal shirt to reveal a Bordeaux shirt underneath.

Having rotated the armband for a little while, Emery decided to hold a vote amongst the squad for their preferred captain.

Swiss midfielder Xhaka, at the club since 2016, won the poll with the new leadership group consisting of Pierre-Emerick Aubameyang, Alexandre Lacazette, Ozil and Hector Bellerin.

Xhaka came with the added bonus of actually playing regularly but merely one month into his captaincy, everything backfired spectacularly.

In a home game with Crystal Palace in October 2019, a section of fans cheered when Xhaka was substituted in the 61st minute. Xhaka was then booed as he walked from the field.

His reaction wasn't exactly the best, making several sarcastic gestures, twice telling the jeering fans to 'f*** off' and removing his shirt before walking straight down the tunnel.

Emery refused to defend his captain afterwards, saying his actions were 'wrong' and there were widespread calls for Xhaka to be severely disciplined.

The player issued a Twitter message in which he talked about his 'feeling of not being understood by fans' and complained about repeated abuse both inside stadiums and on social media, which included death threats.

He apologised but was stripped of the armband. Despite being linked with a move away since on several occasions, he remains at the Emirates and to his credit did put in a number of impressive performances last season. 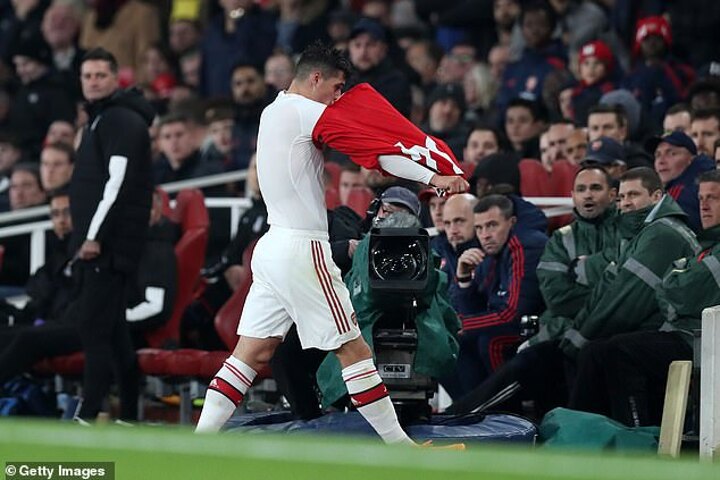 There was much optimism amongst Arsenal fans when Aubameyang was handed the captaincy, but again, the curse of the armband struck.

In March 2021, Aubameyang was left on the bench for the north London derby due to lateness - with Arteta describing it as a 'disciplinary issue'.

Then in December, having returned late from a pre-approved trip to France to visit his ill mother, Aubameyang lost the captain's armband at Arsena.

In a statement, Arsenal said: 'Following his latest disciplinary breach last week, Pierre-Emerick Aubameyang will no longer be our club captain, and will not be considered for selection for Wednesday's match against West Ham United.

'We expect all our players, particularly our captain, to work to the rules and standards we have all set and agreed.'

Aubameyang was exiled by Arteta and forced to train away from the senior squad.

He would leave in January, becoming the latest Gunner to move to Barcelona.

Alexandre Lacazette was the next in-line for captaincy, and when he played, was given the role over the likes of Odegaard and Tierney.

His summer move to Lyon though has opened up the door for a new face to take the role permanently. 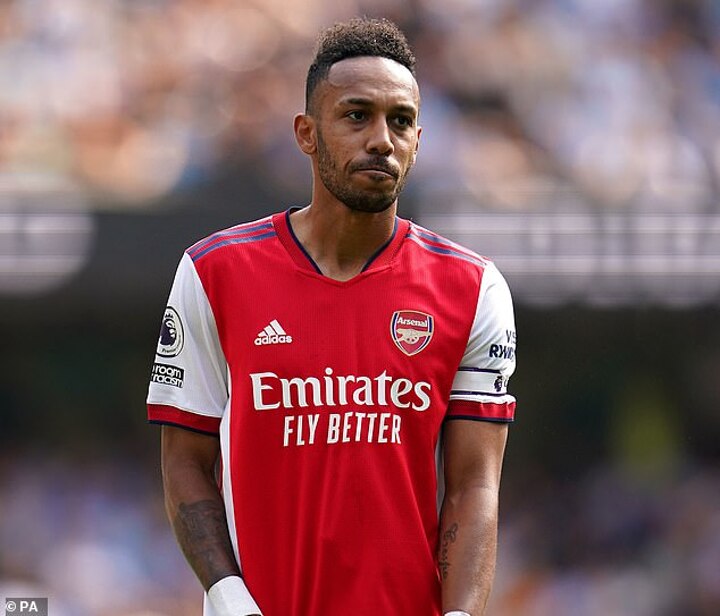