Mikel Arteta has barely had time to breathe since he arrived at Arsenal. 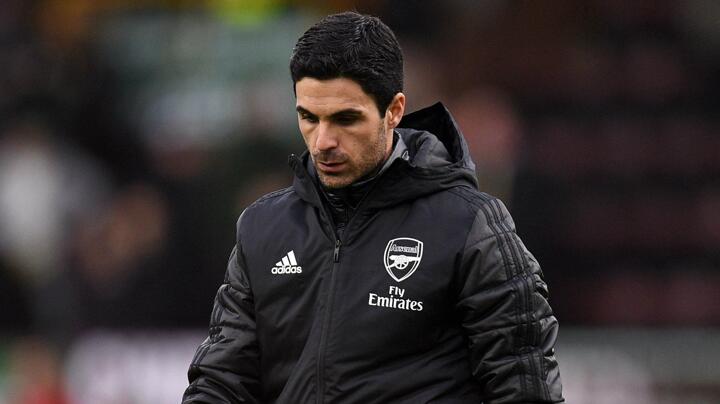 In the space of little over six weeks, the 37-year-old has taken charge of nine games in all competitions and that doesn’t even include the draw at Everton on December 21, which he watched from the stands just 24 hours after his appointment.

In all, Arteta has overseen three wins, one defeat and five draws since landing the Arsenal job. The Spaniard has certainly made the Gunners tough to beat in that time, but victories have remained difficult to come by – especially in the Premier League.

So, after the draw at Burnley last time out, the Spaniard was delighted to get the chance to whisk his squad away for a mid-season break in Dubai.

Given how packed the schedule had been following his arrival, Arsenal’s head coach has had precious little time to work with his players on the training pitch on anything other than forthcoming fixtures.

To have had four days in the United Arab Emirates was a welcome gift to Arteta and one he took full advantage of. Every senior player other than Calum Chambers made the trip.

It wasn’t just about the training; Arteta used the time away to sit down with his players – as a group and individually – to talk about the past six weeks and the direction in which he wants to take the team during the closing months of the season.

“I made a big review of what we have done in these five or six weeks,” Arteta told Arsenal's official website. “The things where we can improve, the areas where we have improved and that we have to maintain, that we cannot lose.

“Hopefully, we can make another step forward as a team now.” 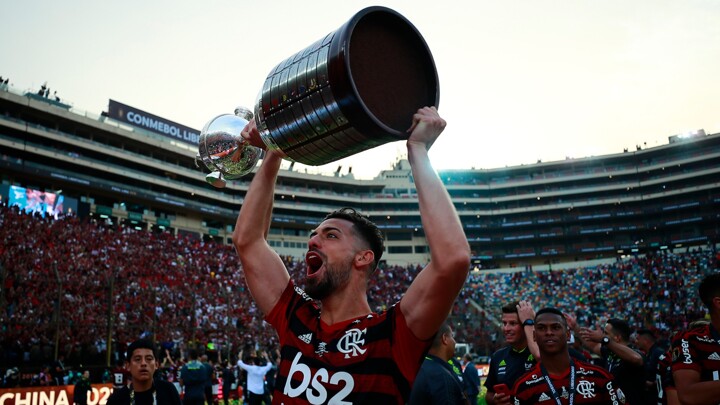 New signings Pablo Mari and Cedric Soares were integrated into the squad, although the latter’s knee injury limited what he could do on the pitch during his time away.

Arsenal have now arrived back in London and focus has switched to Sunday’s game against Newcastle at Emirates Stadium.

With the Europa League due to restart the following Thursday, with a last-32 meeting with Olympiacos, and the FA Cup fifth-round tie at Portsmouth approaching, this is a key period for Arteta as he attempts to salvage something out of what has been a miserable season for the north London club.

There have certainly been signs of improvements during his short time in charge, but there are still some issues that need resolving if Arsenal are to start getting the results they want over the coming months.

Arsenal look far better defensively since Arteta’s arrival, with the back four operating well as a unit and, perhaps more importantly, the midfield now offering the type of protection that was missing during Unai Emery’s tenure.

The days of Arsenal allowing 31 shots on their goal, like they did at Watford, appear to be behind them, with teams now finding it much more difficult to open the Gunners up.

But there is still more work to be done and the addition of Pablo Mari on loan from Flamengo in January is an interesting one.

Since his appointment in December, Arteta’s priority in the transfer market was finding a left-sided centre-back to bring balance to his defensive line and the club found one in Mari. 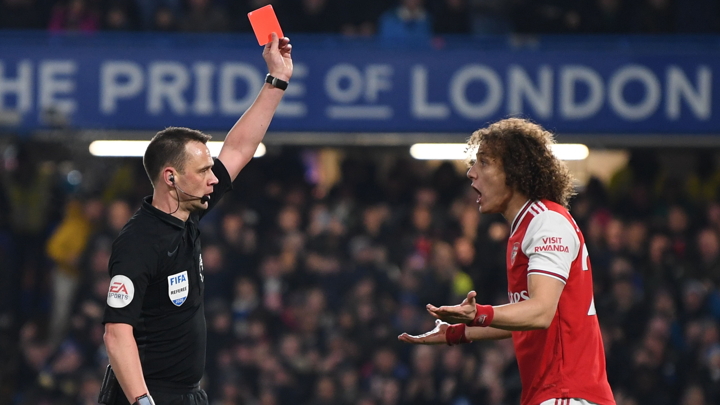 The 26-year-old was a revelation in Brazil after arriving from Manchester City, with his ability to read the game and his exceptional range of passing making him a key ingredient in Flamengo's historic Copa Libertadores success.

But it will take some time for him to adapt to the Premier League and should Arteta look to bring him into the team straight away, it will also mean David Luiz moving away from his preferred role as the left-sided centre-back.

The Brazilian has already stated that won’t be an issue, insisting he will be happy to play anywhere, but the change could initially cause some disruption – which Arteta will be keen to limit.

With Kieran Tierney also due back shortly from the dislocated shoulder he suffered against West Ham, Arsenal’s head coach will also have to decide on his first-choice left-back.

Teenage winger Bukayo Saka has done well there in the absence of Tierney and Sead Kolasinac, but it’s unlikely he will continue in that role once the the senior players return to full fitness.

Getting Alexandre Lacazette firing again is arguably the most pressing issue Arteta needs to resolve if Arsenal are to finish the season well.

It’s now nine games since the France international last scored a goal and his confidence is clearly at rock bottom.

Prior to the mid-season break, Arteta kept faith with Lacazette, starting him as the central striker at Burnley even though Pierre-Emerick Aubameyang was back from his three-game ban.

But after missing a good early chance, Lacazette was a passenger against the Clarets and never really got into areas that caused the home side any problems.

The blank at Turf Moor also means that it is more than a year since Lacazette last scored an away goal in the Premier League. 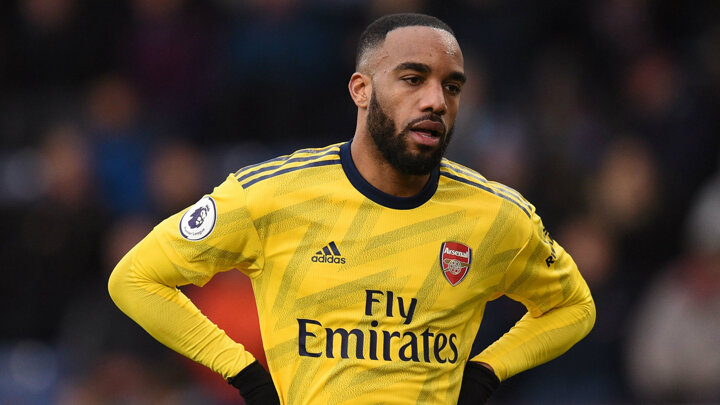 He is clearly being asked to do a different job by Arteta than he did under Unai Emery. He is operating in a deeper role and his pressing has been key to Arsenal winning the ball back higher up the pitch – especially at home.

Despite that, Lacazette’s lack of goals makes it far harder to justify moving a natural finisher like Aubameyang out wide to accommodate him.

Arteta will hope the break in Dubai was what Lacazette needed to recharge his batteries and that the striker can end his long barren run when Newcastle visit the capital on Sunday.

Should he fail to find the target again, then it may be time for the Spaniard to try someone else up front.

One of the main issues behind Lacazette’s struggle for goals is the lack of creativity behind him.

Whereas Aubameyang is the type of striker that can conjure something out of nothing due to his pace, Lacazette needs a supply line to give him chances in and around the penalty area.

Arteta has placed his faith firmly in Mesut Ozil since he arrived, with the German starting all but one of his nine games in charge so far.

And whilst there has certainly been an upturn in form from the playmaker following his struggles under Emery, the former Real Madrid man has yet to register a single assist since Arteta took over.

As an attacking force, Arsenal’s numbers have declined over the nine games Arteta has overseen. According to Opta, they have mustered just 67 shots – which balances out as 9.6 efforts per game, which is fewer than they were averaging under Emery (12.5) and interim boss Freddie Ljungberg (10). 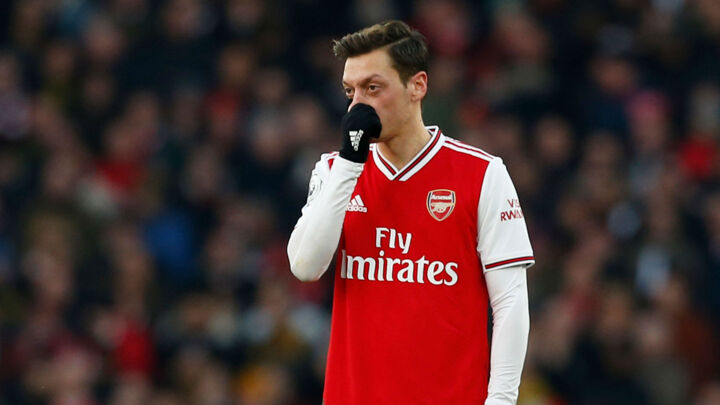 Given the improvements they have made defensively, that is perhaps no surprise. In making Arsenal more difficult to beat, the attack has suffered a bit.

But if the Gunners are going to trouble teams in the latter stages of the Europa League or FA Cup, then they are going to need to start creating more chances for the strikers. Ozil is key to that.

Despite the talents of Dani Ceballos and the ability of Joe Willock to carry the ball from deep into the final third, the German remains Arsenal’s best creative talent.

So, the fact he is averaging a goal involvement once every 684 minutes in all competitions this season is simply not good enough and something Arteta knows he must try to solve.

When Nicolas Pepe and Gabriel Martinelli arrived in the summer, no-one would have predicted that it would be the Brazilian teenager who would have the bigger impact on Arsenal’s season.

Pepe was expected to set the Premier League alight after his club record £72 million ($93m) signing from Lille, while many believed Martinelli would play most of his football at Under-23 level.

But the 18-year-old has been a revelation, scoring 10 goals in all competitions so far while also providing three assists. Martinelli, who was playing state football in Brazil before signing for Arsenal, is averaging a goal involvement once every 90 minutes – that’s a better rate than anyone else in the squad, and by some distance too.

Pepe, meanwhile, has scored five goals – just two of which have been from open play – and has the same number of assists. 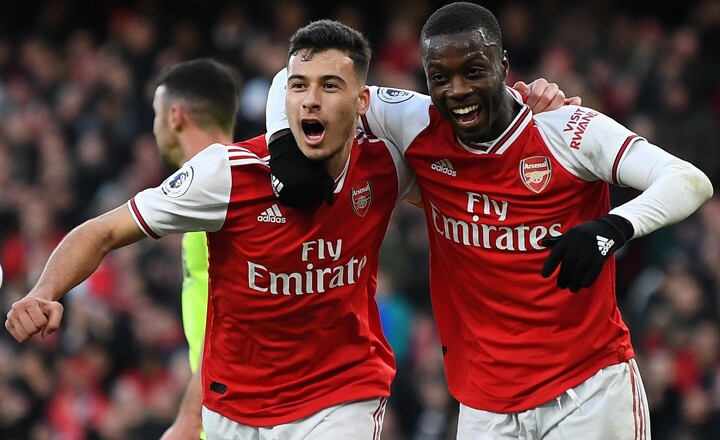 There’s no doubt Arsenal would have expected more from their big-money arrival and will want to do all they can to get the best out of him so he can start showing the sort of form that saw him shine so brightly for Lille last season.

But with Martinelli in such fine form, it makes it difficult for Arteta to leave him out – as demonstrated before the mid-season break when the teenager was preferred to Pepe, who was an unused substitute against Burnley.

Reiss Nelson’s imminent return to fitness will also be a problem for Arsenal’s club-record signing.

Arsenal's head coach has been putting a lot of time into getting more out of Pepe. He has been showing him videos and working on his positioning in training, trying to make him more of an influence in the final third.

There have been some promising signs and Pepe will be given every opportunity to prove his worth, but the emergence of Martinelli means his place in the starting XI can't be taken for granted.