Gabriel Jesus believes he will learn to become a "proper striker" like Sergio Aguero, Manchester City's all-time record goalscorer who will leave the club at the end of the season. 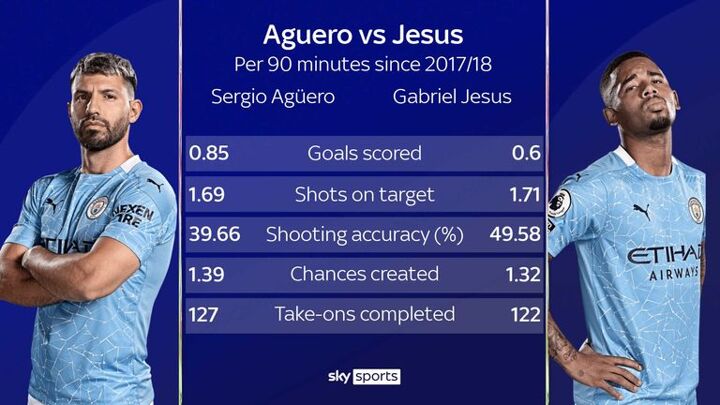 Jesus, 23, has never fully lived up to the stunning 13 goals in 19 games which started his City career in 2016/17, but he has still managed 28 goals in 44 starts from the two-and-a-half seasons since.

Aguero - by Jesus' own admission "the best player in the history of the club" - has proved a difficult object to move for the Brazil international.

But Jesus, City's only other number nine, believes he can evolve into a more 'out-and-out' striker like his team-mate.

"I can learn a little bit [from him] but he's more properly striker than me, he scored more than me," Jesus tells Sky Sports News.

"He goes to the pitch and he scores, he's more striker than me, I can say that because I work with him every day and I play a lot with him.

"When we play together I score one, he scores two, I score two and he scores three. I think I'm going to learn a lot in these next years to become a proper striker who scores a lot."

Erling Haaland and Danny Ings are on Manchester City's list of possible replacements for Aguero, but Jesus insists he "does not feel any pressure".

He scored 23 goals last season, and while he remains determined to beat that tally in the current campaign - he is more interested in City winning a fifth Premier League title in 10 years.

"It's difficult because I have to score more than 10,15 goals, and there's still 15/16 games left, but if we win the titles I don't care about goals," he says. "I care about celebrating the titles with my team-mates at the end of the season."

He has some way to go to match Aguero's numbers.

Aguero has not just outscored every other player since his Premier League debut, it is not particularly close. Harry Kane is 21 behind him with 160 of his own but the next man on the list after him is Jamie Vardy - some 66 goals adrift of the Argentine.

Aguero has scored his 181 Premier League goals at a rate of one every 108 minutes. Again, Kane comes closest to matching that, scoring once every 122 minutes, but nobody can really compete. By any metric, he is the competition's outstanding striker of the last decade.

Jesus admits he must change his style of play to deliver higher figures.

"Not me, I think my football is - I go outside the box, I create with my friends and I wait for the goal. Sometimes I go and I score, but I have to put in my head that when I arrive, I score."

Gundogan: We still have him for a few weeks

Ilkay Gundogan revealed he still gets "goosebumps" watching Aguero's most famous goal in a City shirt - when he clinched the club's first league title for 44 years with the last kick of the 2011/12 season.

It led to the first of four Premier League titles during Aguero's 10 years at City - with the club looking likely to add their fifth before Aguero leaves at the end of the season.

"I think he has done incredible things," said Gundogan. "He has contributed very, very much to Manchester City now being in the position they are in - where we are in.

"I always get goosebumps when I watch it (the goal against QPR to win the Premier League title in 2012), also with the original commentary. Is is already unbelievable.

"But we still have him for a few weeks and in the most important time of the season, so of course we hope that we can now also continue to give his contribution and then we can end the season with a maximum success."

Who will succeed Aguero at City? 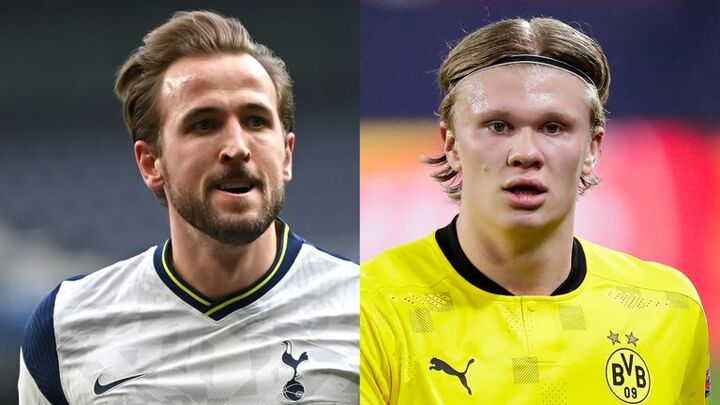 Who will replace the club's all-time top goalscorer at the Etihad?

City have known Aguero's time was coming to an end for some while. The 32-year-old has scored only one Premier League goal this season, and has made only 11 starts in the league since the beginning of 2020.

The club's forward planning, led by director of football Txiki Begiristain and chairman Khaldoon Al Mubarak, has seen the City win four Premier League titles in the last eight years, with a fifth looking likely ahead of Aguero's departure.

But arguably, no player City have had to replace so far has had the influence of Aguero - who has scored almost a quarter of their Premier League goals over the last decade.

So who is in the frame to step up and become the next leading man at the Etihad?